Morocco’s renewed focus on grassroots football is beginning to pay dividends following the qualification of Morocco’s Under-20 national team for next year’s Nations Cup in Mauritania after a 15-year absence.

Morocco’s Under-20 team last qualified for the tournament in 2005 but the seeds of development that the Royal Moroccan Football Federation (FRMF) has planted are flowering into full promise.

The Under 20s qualification comes after the Under 17s had already qualified for the same competition at Under 17 level, which will take place in Morocco starting from 13 March 2021.

FRMF president Fouzi Lekjaa welcomed the Under 20s on their return from Tunisia after their last match against Libya in Rades ended 1-1, congratulating them on their qualification.

“The considerable progress is as a result of extensive work done by the Royal Moroccan Football Federation for several years. After a restructuring of the National Technical Directorate, the Federation has set concrete and ambitious goals for each age group, not to mention the clubs from its championship,” said Lekjaa.

“And as proof, Morocco had four clubs in the semi-finals of the Champions League and the CAF Confederation Cup in 2020. A record that demonstrates the good organisation and balance of Botola’s clubs.

“Moreover, the Moroccan championship dominates the ranking of the African championships of the CAF, including three clubs in the top 10. These three clubs – Raja, Wydad and Berkane, have won four major trophies in Africa in recent years: the Champions League, the CAF Cup (2) and the CAF Super Cup.” 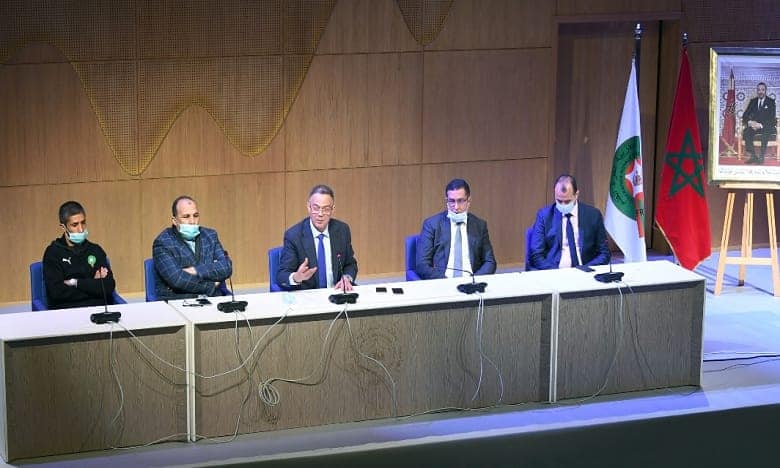 The federation believes the achievements would not have been reached without the effort made in infrastructure development.

The FRMF has decided to equip the whole kingdom with high-level infrastructure that allows clubs to provide professional training to players, but also to national teams to prepare for competitions.

“Apart from the Mohammed VI Football Complex, a jewel of modernity, each regional league (there are 12) has a federal football center and each club will have a training center (like THE FUS and Raja).”

After a 20-year absence from the World Cup, the Atlas Lions participated in the 2018 edition in Russia.

In the African Cup of Nations, Morocco managed to reach the quarter-finals in 2017 after a 13-year wait to reach that stage.

At the 2019 finals, Morocco again managed to get through the group stage but sadly bowed to the penalty against Benin in the round of 16.

The futsal team is not to be outdone and has won the last two African Cup of Nations, including the 2020 home edition in Laayoune. The Moroccan futsal team is now ranked 21st in the FIFA rankings, and is considered as the first team in Africa.

Meanwhile, Morocco is preparing to launch the first national women’s professional championship for the 2020/21 season and the grants allocated to clubs have increased sixfold £6 million euros.

At least 1000 technical managers will be trained specifically for women’s clubs and the FRMF aims to train 90,000 practitioners by 2024. The aim is to establish itself on the continental and world stage.