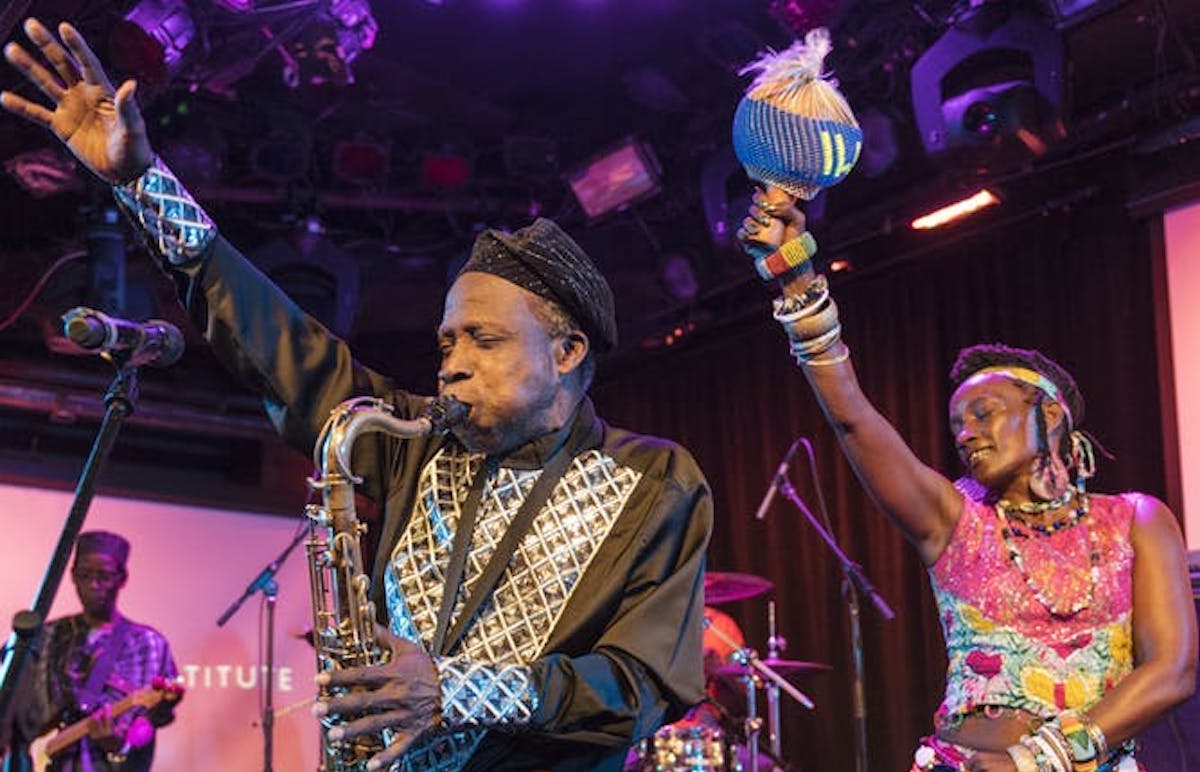 Orlando Julius (Orlando Julius Aremu Olusanya Ekemode), who passed on 15 April 2022, lived the sort of life many had hoped fellow Afrobeat star Fela Kuti would. Julius was well-mannered, well-spoken and cultivated a reputation mostly devoid of raucousness and pyrotechnics.

Born in 1943 at Ikole-Ekiti, south west Nigeria, his first major musical experience as a boy was serving as a drummer while his mother danced. Julius became a saxophonist, band leader and global star. His extensive background and travels offer an encyclopedic sweep of 20th century West African and African American music.

He worked with top notch highlife acts such as Julius Araba, Cotey Necoy, J.O. Oyeshiku and maestro I.K. Dairo in Ibadan – the south-western Nigerian city famed for its cultural heritage. Highlife is a West African music genre that borrows from traditional music but is influenced by rock ‘n’ roll and jazz. And then he further deepened his knowledge of highlife in Lagos in the 1960s. It was amid an eclectic potpourri of musical styles (including Cuban phrasings and beats), personalities and happenings.

By the early 1970s, he was already a notable contender for the Afrobeat mantle alongside the redoubtable Kuti and the supercool, perennially dark-shaded drummer, Remi Kabaka. Afrobeat is a movement in West African music characterised by harmonic and melodic grooves, call and response choruses and intricately layered syncopation (disrupted rhythms). While the politically outspoken, free living Kuti was barred from television appearances, Julius frequently graced Nigerian TV screens and quickly became a darling.

And then when his star seemed set to rise even higher, he relocated to the United States where he hooked up with South African jazz star Hugh Masekela to form a band, Ashiko.

The combo went on to acquire good standing, opening for famed US musicians like Herbie Hancock, The Pointer Sisters and Grover Washington Jr. In fact Julius would teach one of Michael Jackson’s older brothers to play African drums, having struck up a warm relationship with their parents.

In the US as with many Africa-centred artists – such as the talented Nigerian musicians the Lijadu Twins – Julius tried to remain true to his cultural roots. This path of cultural authenticity might have been inspiring but couldn’t always have made great business sense in view of having to compete with funk, disco and soul music.

A meeting in Nigeria

Julius returned to Nigeria for a spell in 1984 along with Latoya Aduke, his African-American wife. I first ran into them in the late 1990s in Lagos at publisher Kunle Tejuoso’s The Jazzhole, a record-cum-bookstore on Awolowo Road, Ikoyi. At once I was invited to visit them at their studio in a Lagos suburb. They proved to be two of the most charming interviewees I have ever encountered. In spite of having an impending show, they had all the time for me.

Latoya, an unstinting nucleus of unalloyed energy, was rehearsing with a dance troupe for the show. Julius was busy with the music at a state-of-the-art production desk. Latoya, a dancer, was spry, taut and muscled whilst Julius was only slightly rotund, given to easy, infectious smiles, as chilled out as your favourite uncle.

When it was time to talk, they were more concerned with their future plans. I, on the other hand, was more intrigued by their remarkable past. They had played at every venue and city that mattered and had jammed with or opened for the crème de la crème of the music world, including Miles Davis. What was Davis like? The ever amiable Julius merely shook his head incredulously. Davis – the king of America’s East Coast cool jazz – wasn’t someone to be toyed with.

A faint impression I got from them was that the music industry wasn’t what it was cracked up to be. Without their actually saying so, one sensed it was full of disappointments, betrayals and heartache. Nonetheless, there was no other choice but to forge ahead.

But the most powerful memory of that interview was their passion for music and performance. They rehearsed as if they had everything to prove, as if their lives depended on it, even though they had already done countless shows and undertaken innumerable tours and recordings. The dedication, humility and commitment with which they handled their business would always be rare and exceptional.

It became apparent chatting to them that, at the end of the day, it isn’t the personality of the artist that matters but the art itself.

Julius’s Afrobeat didn’t blow off rooftops like highlife, juju, fuji or even Kuti’s version of the genre for a number of reasons. He went abroad at a critical stage, when he needed to be at home nurturing his audiences. In addition, Afrobeat was initially considered rebel music, cliquish and lacking in the apparently feelgood vibes of Nigerian genres like juju or fuji.

And, when it was still evolving, Afrobeat seemed too cosmopolitan and experimental, and culturally shifty. This ensured that only a very small circle of musicians were equipped to play it.

As for audiences, it took enormous amounts of work to build anything resembling a critical mass. Eventually, most of the heavy lifting was left to Kuti when Julius departed Nigerian shores. At this stage, Afrobeat was split between these two distinct polarites; Kuti and Julius, and with very little in between to fuel their primal grooves.

Personality-wise, they couldn’t have been more different. Kuti remained in Nigeria to irritate the political and economic elites at every turn. Julius, on the other hand, became a global troubadour exhibiting almost unfathomable depths of African music wherever he could and with whomever cared to listen.

When the ever avuncular Julius finally returned to Nigeria, he had a head filled with experiences and a heart brimming with memories which he was always gracious to share with younger generations of artists.

It didn’t appear he was motivated by fame and fortune. He was essentially an artist and that was what he took to his grave.

The Burden of the Writer’s Legacy