China’s approach to peace in Africa is different. How and why
Advertisement 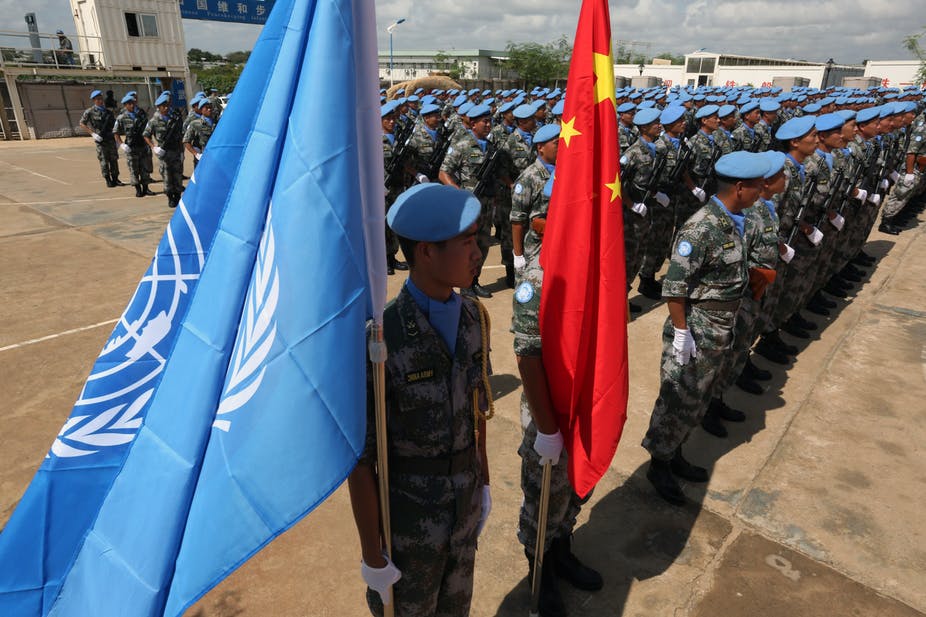 China has steadily increased its participation in United Nations (UN) peacekeeping operations in Africa since its first mission in 1989, when the UN monitored the independence of Namibia from South Africa. Its funding and personnel have both grown.

In 2019 China contributed $7 billion to UN peacekeeping, which accounted for 15.22% of the global peacekeeping budget. This was up from 10.28% in 2018 and makes it the second largest financial contributor after the US. Of the 14 current UN peacekeeping missions, seven are in Africa, which absorbs about two thirds of the budget.

China has 2,458 military and police personnel serving in eight missions around the globe. This is far more than the combined contribution of personnel by the other four permanent members on the UN Security Council – Russia, the US, France and Britain.

In my book, Chinese Peace: From Peacekeeper to Peacemaker, I argue that a Chinese model of participating in peacekeeping, peace-building and peacemaking differs fundamentally from that of Western nations.

Whereas the “liberal peace” model draws on Western experiences of democracy and free-market economic policies, the Chinese model draws from traditional Chinese political philosophy and its domestic developmental experiences of the past 40 years.

What then is the China model for peace in Africa? How does Beijing understand African insecurity and how ought African countries to engage with Beijing?

Since China joined the UN in 1971 (displacing Taiwan), it has adopted a multilateral and non-confrontational approach. As a permanent member on the UN Security Council, it has won respect from African countries for championing issues of the South. For example, former South African president Thabo Mbeki called on China and Russia to veto Western sponsored UN sanctions on Zimbabwe in 1998.

The Chinese peace model prioritises societal stability and economic development over political reforms and individual rights. The recipe for economic growth is for the government to kickstart it by revitalising infrastructure.

The model rests on three pillars:

First, China suffered Western and Japanese invasions in the 19th and 20th centuries. It also had treaty ports imposed on it, such as Shanghai and Hong Kong. China still sees the colonial invasions and loss of territory as the “century of humiliation”.

Second, Beijing is sensitive to outside interference in its internal affairs, especially in its peripheries such as Xinjiang, Tibet and Taiwan. It guards against peacekeeping becoming a tool for regime change.

There have been significant economic reforms in China over the past 40 years, but no fundamental political reforms.

While Western discourse criticises China for disregarding human rights, China points to its poverty alleviation record. It argues that improving the welfare of the majority is more important than protecting the civil liberties of minorities. And, whereas the West hails elections as a sign of progress, China highlights the violence and the policy discontinuity that often accompany them.

There are two fundamental issues that Beijing needs to address when it engages in peace missions in Africa. The first is that it does not have a tradition of peace and conflict studies, and its intelligence comes mostly from its embassies and news agencies.

This means it doesn’t fully understand the internal dynamics of African countries, and its views are skewed towards favouring incumbent African governments, irrespective of their track records. It has sometimes aligned itself with despotic leaders on the continent.

Secondly, whereas the West is guided by human rights, democracy and Christian values in its approach to peace operations in Africa, China is at a loss, relying simply on adopting a pragmatic approach. But pragmatism may not be enough going forward as Africa looks to China to provide leadership in development, peace and security.

There is vibrant debate among Chinese scholars about the alternative values China brings in its conduct of world affairs. My notion of the three pillars is only a small piece of the puzzle.

Chinese academics Yaqing Qin and Xuetong Yan are the two most prominent figures in Chinese international relations theory. Both draw on Confucianism, an indigenous Chinese philosophical system that emphasises social harmony. Qin argues that societal harmony is the goal of a government, and this is achieved when members of a polity have the correct reciprocal relationships. Yan draws on the concept of Ren (benevolence), where it is the leaders’ duty to care for their people.

China’s infrastructure-led approach offers an alternative to the mainstream Western model for development and peace in Africa.

France is reviewing its relationships with African countries and the US has arguably lost its dominant position in Africa.

This paves the way for China to play an even more prominent role in African peace and security.

Is West Africa’s Eco currency just an echo of the colonial past?