On April 25, Elon Musk, the world’s richest man, reached a deal to buy Twitter for $44 billion in cash, literally breaking the internet.

But what should we expect?

Twitter was founded in 2006 by Jack Dorsey, Noah Glass, Biz Stone and Evan Williams and has grown to be a robust microblogging and social networking and one of the most iconic and fundamental innovations of social media.

As at January 2022, Twitter’s self-service advertising tools estimated that marketers could reach 436.4 million users on Twitter, making the social networking platform the 15th most active social media site. The investor earnings report showed that Twitter had a total of 217 million monetisable daily active users around the world. This is an increase of 25.0 million (13.0%) when compared with the Q4 report in 2020, as can be seen in an analysis by Kepios. 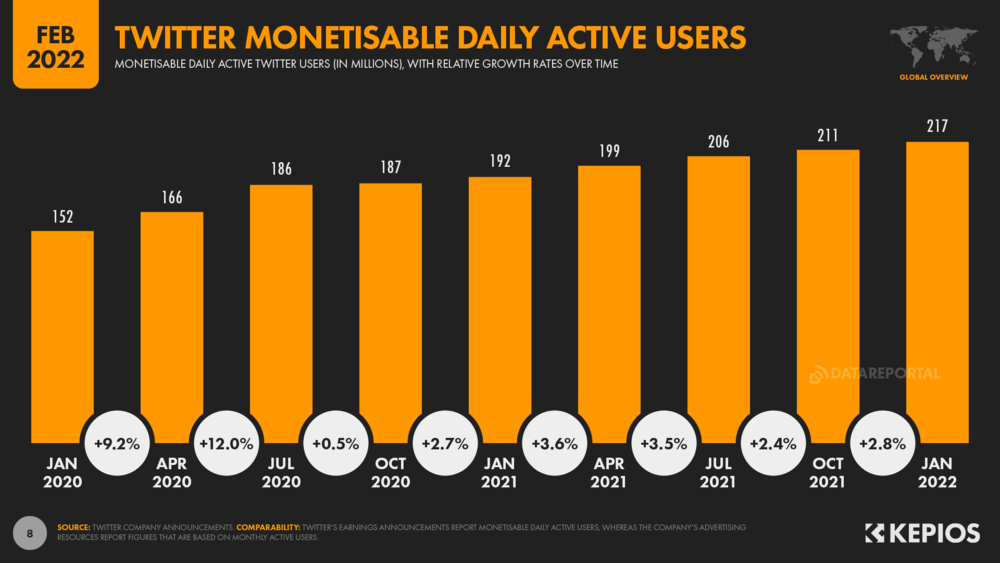 According to Macro Trends, the market capitalisation stood at $37.36 billion as at April 22, 2022. Historical data, presented below, shows the oscillations of the stock price from 2011 to 2022, demonstrating the inability of Twitter to maintain a consistent upward trajectory, an aspect which has consistently affected, sometimes negatively, shareholder earnings.

These trends indicate that, in the eyes of investors, Twitter’s vision has been stagnant over the past couple of years, and with no news of innovation in the social media space, at a time of competitive pressure, the future remained unsteady.

This is where Elon Musk comes in.

Details about the Elon Musk deal

A week ago, Elon Musk disclosed that he had acquired a 9.1% in the company, making him the largest shareholder. The disclosure prompted Twitter to request Elon Musk to join the board of directors, a charm offensive Musk declined, followed by the billionaire’s bold proposal to buy the company at a premium of $54.20 per share, implying a valuation of Twitter at $44 billion. A too good to be true deal, but one that could effectively make Twitter a private company.

On April 25, Twitter board, after a lacklustre attempt to ward off Musk’s takeover bid, accepted the offer to buy the company. Upon shareholder and regulatory approval, the cash deal will make Twitter a private company and give Elon Musk the free pathway to implement a raft of changes he believes are central for Twitter’s evolution as the fulcrum of social media innovation.

The purchase price represents a 38% premium to Twitter’s closing stock price on April 1, 2022, which was the last trading day before Mr. Musk disclosed his approximately 9% stake in Twitter.

Free speech is the bedrock of a functioning democracy, and Twitter is the digital town square where matters vital to the future of humanity are debated

In justifying his intention to buy Twitter, Musk stated that, “Free speech is the bedrock of a functioning democracy, and Twitter is the digital town square where matters vital to the future of humanity are debated,” Musk said in a statement included in the press release announcing the $44 billion deal. “I also want to make Twitter better than ever by enhancing the product with new features, making the algorithms open source to increase trust, defeating the spam bots, and authenticating all humans. Twitter has tremendous potential — I look forward to working with the company and the community of users to unlock it.”

Musk has secured commitments for $46.5 billion to help him finance the deal, that is including $25.5 billion from Morgan Stanley Senior Funding and other firms, and $21 billion in Elon Musk’s own equity injection.

If Elon Musk succeeds in closing the deal, Twitter will become one of the most important corporate prizes controlled by the world’s richest person and the genius behind the visionary successes of Tesla and SpaceX.

Twitter maintains a prize status as a popular social media platform, and the home to 23% of the internet population. There are 1.3 billion Twitter accounts, even though only a quarter of these are monthly active users (MAUs).

Musk has over the years criticised Twitter policies that censor free speech. Whether Elon Musk will exercise free speech is another matter. There are fears that Musk will use the opportunity to silence voices who hold a different ideological position, while blocking critics from parading the dangers of billionaire control of one of the most important social media spaces for discourse.

In a tweet just after the news broke out, Elon Musk wrote that, “I hope that even my worst critics remain on Twitter, because of what free speech means,” to which Adi Gaskell, a writer for Forbes countered that, “I hope you won’t become a platform for spreading misinformation as that’s not what free speech means.” Jon Cooper, who has worked with both Joe Biden and Barack Obama, added that, “free speech is one thing, Elon. Hate speech and harmful disinformation are quite another.” 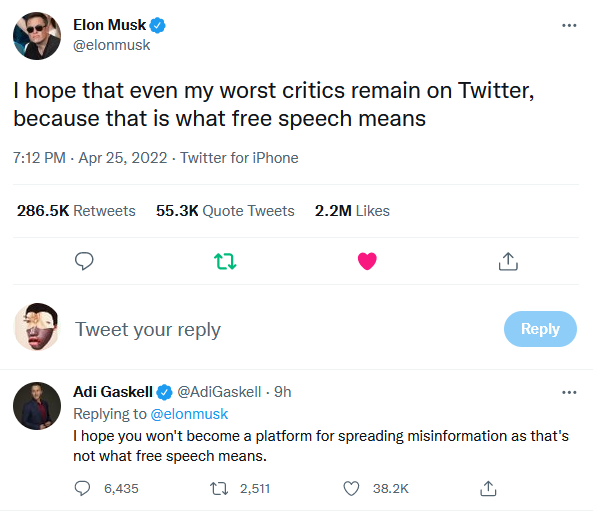 These arguments belie the age-old discourse wars over what free speech entails. One has to expect countless Op-eds on the boundaries of free speech, or other, the limits beyond which one’s free speech would degenerate to libel, slander, obscenity, sedition, hate, incitement, and many other common limitations and boundaries associated with the freedom of speech and expression.

Recognising the need for some level of content moderation, particularly against those who explicitly call for violence against others, Musk noted that, “I think it’s very important for there to be an inclusive arena for free speech,” preferring “time-outs” as opposed to permanent bans.

To combat twitter bots, or automated accounts that post rapidly and repeatedly in the guise of people, Musk has suggested authenticating users as real human beings.

Anjana Susaria, a researcher of social media platforms, in an analysis on The Conversation, noted that, “Musk’s description of a platform free from content moderation issues is troubling in light of the algorithmic harms caused by social media platforms. Research has shown a host of these harms, such as algorithms that assign gender to users, potential inaccuracies and biases in algorithms used to glean information from these platforms, and the impact on those looking for health information online.”

Beyond the altruistic free speech intentions of Musk, questions of having unfettered access to data for billions of people around the world, might shape, and not always for the better, the increased manipulation of the masses for profit, while also putting Musk in a position to directly influence the trajectory of political and ideological conversations, globally.

The ownership of Twitter throws Musk deep into conversations about the inordinate power of tech billionaires in the modern world, in manufacturing public consent – that is how social media institutions can be used to carry out, in the words of Noam Chomsky, “system-supportive propaganda function, by reliance on market forces, internalized assumptions, and self-censorship, and without overt coercion.”

Still, as someone with deep interests in Data Science, and who has utilised machine learning tools to mine and analyse Twitter data, it will be interesting to witness how some of Musk’s ideas such as making Twitter’s algorithm more open source and more transparent, will help in amplifying Twitter’s value in shaping real-time discourse and its utility as a gold mine for researchers gathering geo-tagged data to analyse a variety of societal phenomena.