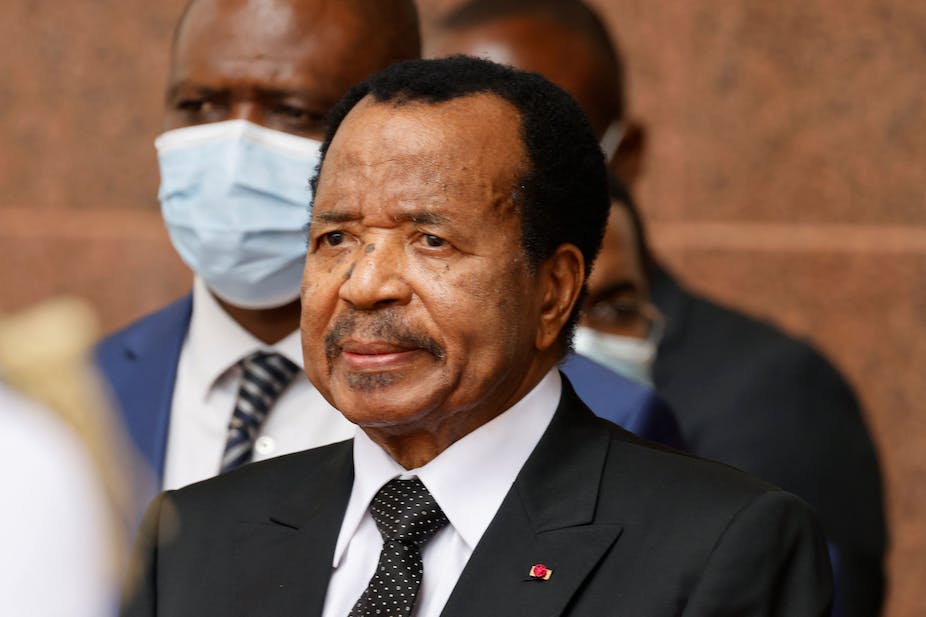 At 89 years old, one of the oldest leaders in the world, President Paul Biya of Cameroon has marked 40 years as head of state. He assumed office in 1982.

He is the second longest serving leader in Africa. The longest is Equatorial Guinea’s Teodoro Obiang Nguema, in power since 1979.

Cameroon experienced a long spell of political stability under Biya’s iron hand. But this eventually unravelled when an Anglophone rebellion broke out in the south-west and north-west and when radical Islamists entered from Nigeria. Domestic pressure for Biya to accept a transition has also been persistent.

But Biya remains non-committal about relinquishing power in 2025, which would be the end of his current seventh term of office.

What explains Biya’s longevity in office and why is Cameroon unable to marshal a transition?

I am a scholar of democratic studies and regime types in Africa and a commentator on African political developments. I’m interested in why the continent is saddled with ageing presidents who ought to be enjoying their retirement when it desperately needs young, agile and innovative leaders equal to its challenges.

Biya succeeded Ahmadou Ahidjo, Cameroon’s president from 1960 to 1982, after his surprise resignation. Ahidjo had been struggling with an economic crisis and widespread corruption. He had superintended a one party state and an exceptional centralisation of power in the presidency.

When Biya became president in 1982, he promised political liberalisation, including democracy, civil and human rights and economic advancement in Cameroon.

For a while, he worked to achieve some of these goals. The country achieved political stability and unity, and relative economic transformation through his “new deal”. There was even a momentary easing of the draconian police state.

But in the late 1990s, there was a gradual halt to political liberalisation, fiscal discipline and government accountability. This happened after the 1984 bloody coup attempt by the Republican Guards.

Biya became increasingly unyielding to political accommodation. First he purged Ahidjo’s faction within the ruling party and eventually he locked out any meaningful challenge to his leadership from within or outside the party. Ultimately though, under external pressure, he agreed to a multiparty dispensation in 1990.

This has gradually and systematically been hollowed out, creating a monolithic system that entrenched Biya in office for the last 40 years.

Cameroon’s politics has long been dominated by Biya’s Rassemblement Démocratique du Peuple Camerounaise, which rebranded from the Cameroon National Union in 1985. It had been the dominant party since 1966. After a formal opening up of the political space to multipartyism, this has gradually been weakened.

There has been a failure of political party institutionalisation. Hundreds of small parties mushroomed – 300 to date, many allegedly secretly bankrolled and controlled by Biya. They provide a façade of democratic competitiveness. In reality, they have weakened legitimate political opposition.

The absence of a united and consolidated opposition has enabled the entrenchment of a dominant party system. The ruling party has a dominant majority in both the National Assembly and the Senate (63 seats of 70). This erodes any chance of genuine checks and balance.

The party has also used electoral mechanics like redrawing boundaries for electoral advantage and in places outright fraud to expand victories and consolidate majorities.

Elections have become little more than a procedural inconvenience, where Biya runs with no possibility of losing.

Biya has created a rent seeking political class that not only does his bidding but keeps him in power with minimum resistance. Cameroon is a leading exporter of timber in Africa and fifth largest cocoa producer in the world.

The country should have enough resources to reduce extreme poverty and underdevelopment. Yet the proceeds are plundered through corruption and to maintain a clientelist network.

Politicians must show allegiance and loyalty to Biya. The alternative is being out in the cold or in jail. Biya has also filled senior positions in the administration, the military and security agencies and the civil service with people from his southern ethnic group. Most notably he has relied on the Rapid Intervention Battalion, a highly trained military commando unit, to ensure the regular army is unable to move against him.

The Anglophone conflict has also enabled Biya to deflect attention from his misrule. The violent conflict has left thousands dead in a civil war against the secessionist English-speaking regions of the country.

Biya, relying on French and recently Russian backers, used the conflict to strengthen his domestic hand and deflect international criticisms.

Another factor is the concentration of power in Cameroon. Nothing substantive gets done without the sign-off of the president. No arm of government or entity of the state has gone unpoliced, including the judiciary: judges are nominated directly by the president.

Simply put, there is no facet of public life untouched by the Biya regime.

The president’s mandate runs out in 2025, at which time he will be 92. While he has shown no signs of exiting the stage, talk of a post Biya era is rising.

Although the ruling party has not held a party congress since 2011, hence dampening the transition debate, there is periodical internal party reorganisation. The president has used it to reward and check potential threats to his supremacy.

Biya’s stewardship has long run its course. Its longevity relies on ruthlessness and political astuteness.

Sadly, the real cost is to the country’s democracy, which has long suffered fissures that can only be healed by political renewal through a change of guard. And this change is one that even Biya can do little to forestall.

​​Is Russia really the reason why Mali continues to push France away?