Politics and fashion: the rise of the red beret
Advertisement 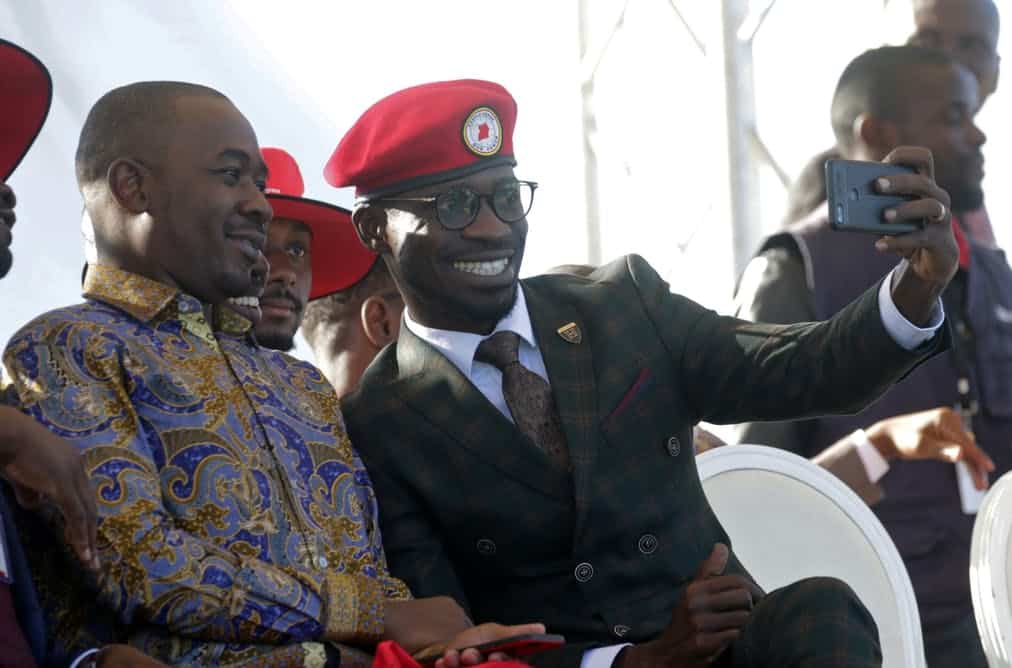 Bobi Wine has come a long way in two years. The self-styled “Ghetto President” of Uganda used to be a music star, playing politically charged reggae beats to packed houses. In 2017, the politics took over.

Donning a red beret, he formed the People Power movement, running a successful grassroots campaign to be elected as a parliamentary representative. Now, he’s challenging Yoweri Museveni for the presidency in 2021.

In two years, Wine’s red beret has become synonymous with a fiery spirit of Ugandan resistance, long since thought to be extinguished after 33 years of ironclad rule by Museveni.

In the beret, Wine cannily put the “brand” in “firebrand” across his multiple social media platforms. In response, the regime is turning to unconventional suppression tactics. On September 18, 2019, a government gazette listed the red beret as official military attire, effectively banning it from public life.

Perhaps fittingly for a time of stark global inequality, red headgear is currently marking global populist movements of all political persuasions. The French Revolution brought us the “bonnet rouge” and red is historically synonymous with leftist politics. But red baseball caps famously heralded the 2016 US election of Trump in a rustbelt resurgence.

South Africa has its own version of working-class red: the Economic Freedom Fighters. The opposition party’s trademark red beret forms part of a trio of headgear including the wrap and hard hat. Within weeks of the party debuting their look, sales skyrocketed. Similarly, Make America Great Again hat sales have soared to one million in 2019.

A beret may not make a worker’s revolutionary, but it certainly makes a statement. Its history is equal part bohemian artist and militant revolutionary; it’s been worn by everyone from Rembrandt to Robert Mugabe, the Beatniks to the Black Panther movement.

Fittingly, Wine styles himself as both artist and activist, his career as a musician merging seamlessly into his political manifesto. “When we sing ‘Tulivimba mu Uganda empya’ (We shall move with swag in a new Uganda), we summarise what our struggle is about – DIGNITY,” proclaimed Wine in a tweet.

Indeed, Wine’s social media presence is key to his success, spreading message and image interchangeably. Using his prolific Twitter, Facebook and Instagram presence, he is relentlessly visual: nearly every update is accompanied by an image of beret-clad supporters. His near daily updates centre less on local rallies than on his increasingly high profile, Western travel and media coverage. It’s a canny move in a country where 78% of the population is under 35.

The Ugandan regime is nothing if not wise to this: on July 1, 2018, the government instigated what was dubbed a “social media tax”, charging Ugandans 200 shillings (roughly five US cents) a day to use a bouquet of 60 internet applications, including WhatsApp, Facebook, Instagram and Twitter. While the price may not seem prohibitive, it still presents a big structural barrier in a country where 41.7% of people were living on less than $2 a day in 2018.

“Social media use is definitely a luxury item,” announced Museveni, ironically on his personal blog. He continued:

Internet use can sometimes be used for education purposes and research. This should not be taxed. However, using internet to access social media for chatting, recreation, malice, subversion, inciting murder, is definitely a luxury.

The social media tax has added a new twist to Museveni’s suppression tactics. While virtual private networks allow more savvy Ugandan users a way around the problem, others take the hit and pay the price.

Wine’s tactical use of music and fashion follows Museveni’s own playbook. The Ugandan president released his own popular song in November 2010.

Unlike Wine’s populist reggae, Museveni’s “U Want Another Rap” is mostly sung in Runyankore, a language predominantly spoken in rural areas of the country. Its heavy-handed lyrics emphasise individual resilience, like “harvesters … gave me millet, that I gave to a hen, which gave me an egg, that I gave to children, who gave me a monkey, that I gave to the king, who gave me a cow, that I used to marry my wife.”

In line with this folksy approach, Museveni famously favours a wide-brimmed conservative sunhat with leather string. Like Wine’s, the hat is a feature of most leadership portraits. The contrast couldn’t be starker: an old man with a broad-brimmed gardening hat and his young, hip rival in revolutionary red branded beret.

Against the backdrop of a Ugandan dictatorship that controls media narrative, then, viable opposition needs a boost. Wine’s choice of symbol fits well. Berets are convenient: cheap to produce and impossible to ignore. The splash of red next to the face makes its way into every photograph. Unlike a T-shirt, headgear is easily stashed or discarded during confrontation without immediately signalling a clothing item has been removed.

Dr Rosie Findlay, digital fashion media specialist and author of Personal Style Blogs: Appearances that Fascinate, says the fact that the beret is being deployed on social media should not be overlooked.

The colour pops on the small screen and is immediately recognisable, a literal fashion statement in how its symbolism immediately marks Wine’s image with his politics.

In the face of the banning of the red beret by Museveni, Wine seems unfazed:

He thinks it is about the beret – it’s not. This is a symbolisation of the desire for change. People Power is more than a red beret, we are bigger than our symbol.

With 18 months before the next Ugandan election and two hats in the ring, let us see if revolutionary spectacle can translate into substantial governance.

Zimbabwe’s currency crisis is far from being resolved