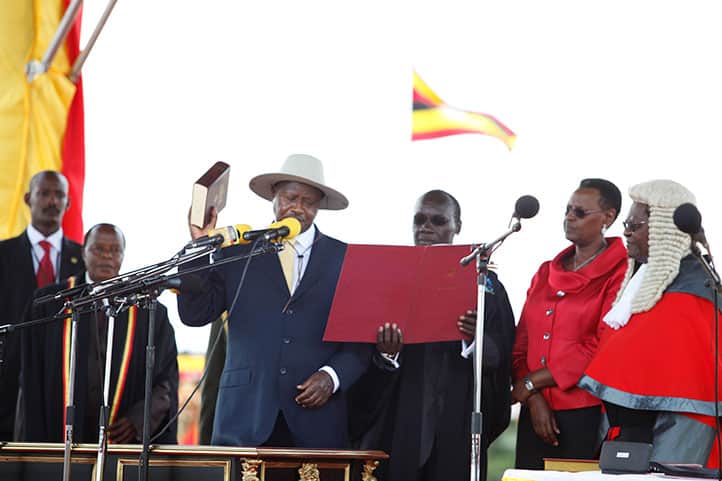 The highly controversial bill passed with 315 votes for, 62 against and two abstentions, after three days of chaotic debates in which some opposition MPs were suspended, while others walked out.

The bill will pass into law once it is signed by Museveni.

Under current laws, Museveni, 73, would not be eligible to run for office again in 2021 as candidates over 75 are not allowed.

The new bill re-introduces presidential term limits, which were scrapped with the introduction of multi-party politics in 2005, however, this will only come into force following the next election — meaning Museveni could serve two more terms.

And in a move widely viewed as a quid pro quo for lawmakers backing the unpopular age limit bill, the terms of MPs and local government officials were extended from five to seven years, pushing parliamentary elections to 2023.

“To remove the age limit — one of the most important safeguards — will entrench a dictatorial and autocratic regime in Uganda, ” Opiyo said.

“In a country where — according to international observers — elections do not represent the free will of the people… the age limit was the only safety valve left which will allow the peaceful transfer of power from Museveni.”

Opiyo called the move to reintroduce term limits a “facade”.

“It’s not being made in good faith — it’s being made to mask a broader scheme to remove the age limits.”

“The NRM can choose President Museveni or someone else to stand in the next elections. If he happens to be one of the first beneficiaries then there is no problem. We have also seen that people above 75 are celebrating,” Mulindwa said.

“Lifting the age limit opens opportunities to all ages — young, middle aged and old ones so they can contest the presidency. It should not be limited to 35 to 75 year olds — that’s discriminatory.”

Read: Ugandan MPs get $8,000 to consult with constituents over removal of age limit

On the move to extend parliamentary term Mulindwa said that would benefit everyone “even the opposition.”

He once said leaders who “overstayed” in power were the root of Africa’s problems, however as he ran for a fifth term in office in 2016 he said it was not the right time for him to leave office, as he still had much work to do.