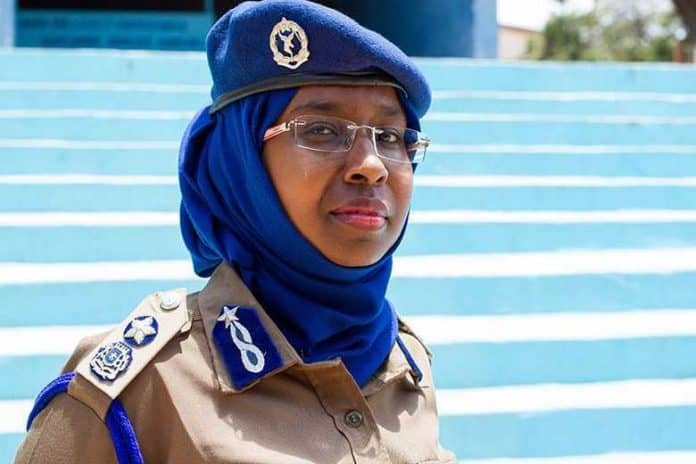 Zakia Hussein Ahmed has been promoted from the rank of a Colonel to Brigadier General, making her the first woman in Somalia to occupy the position in the Somali Police Force. Brigadier General Zakia also occupies the new position of Somalia’s Deputy Police Commander.

General Zakia’s new position is the first of its kind that’ll be occupied by a Somali woman. Her new role entails overseeing federal police forces throughout the country. Her new badges of ranks were pinned on her shoulders by Somali’s Prime Minister Hassan Ali Khayre.

Read: Fatma Samba Diouf Samoura is the Most Powerful Woman in International Sports

PM Khayre said, “If women are at least fifty per cent of the population in Somalia, they must get what they deserve. In fact, every person should get his or her rights, otherwise we will not be able to compete with our neighbours.”

General Zakia’s promotion came on the 16th of August, 2018 as part of security sector reforms by the Somali government. The ceremony was held on Sunday (August 26) at the General Kahiye Police Academy in Mogadishu. PM Khayre said, “I want to encourage Somali women to stop aiming low. Instead, I would like you to focus to becoming the next president and premier in this country.”

The historic development is proof that women in Somalia and across Africa are indeed pushing boundaries and scaling barriers, which have for long seemed insurmountable. The historic appointment will undoubtedly inspire young girls and women in Somalia, and indeed across the continent to follow their dreams, and reach for their goals.

Somalia is following in the footsteps of  other African countries in supporting women in the security forces. In 2011, Proscovia Nalweyiso became the first female Brigadier General in Uganda, a noteworthy achievement, which was celebrated across the continent. In 2017, the country recorded another remarkable milestone with  the promotion of Brig Nalweyiso to the rank of Major General. With the appointment, Nalweyiso became the country’s first female Major General, and one of the few women across the continent to hold such a powerful military position.

Related Topics:Women empowerment
Up Next