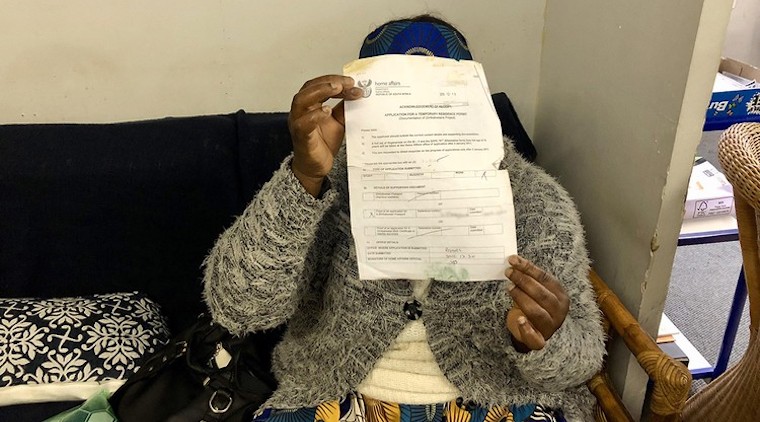 In 2009, the South African government introduced a Dispensation of Zimbabwean Permit (DZP) to legalise the many Zimbabweans already inside the country because of the political and socio-economic situation at home.

Zimbabweans who until then had applied for asylum were encouraged to apply for a DZP. When applying their asylum documents were retained by the Department of Home Affairs. Almost a decade later, some of these Zimbabweans who gave up their asylum papers have still not received their DZPs.

As undocumented people they have been struggling to find employment, open bank accounts, study, enrol their children in schools, and get treatment at hospitals. They also face the threat of being arrested for being illegally in the country.

Judith (surname withheld), a widow, gave in her asylum papers in 2010, but never received a DZP. Documents show that Judith and her husband (who passed away in January) had applied for the DZP in Paarl on 30 December 2010.

Judith has lost her job at a wine farm. Her employer will only reinstate her if she provides a valid document for being in South Africa.

In 2011, her son was hit by a truck on his way from school and spent a long time in hospital. The Road Accident Fund processed his claim but will only pay the money into a bank account in his name, but he cannot open an account because of his undocumented status. He is 18 years old now and struggling to register for university.

Judith travelled from De Doorns, where she lives, to seek help from PASSOP (People Against Suffering Oppression and Poverty), a community based non-profit organisation. Tendai Bhiza of PASSOP said it has about 20 people in its database facing similar challenges.

Judith said it has been difficult to pursue the DZP because of cash constraints, her living far from the city, and the fact that she had to care for her son after the accident. She also lost valuables and was displaced during the violence characterised by xenophobia in 2010.

“In August I gave up, packed my stuff and returned to Zimbabwe. I was ready to restart, make sacrifices but I failed to keep up with the Zimbabwean current situation,” she said. She found it too hard and returned to South Africa.

 Phyllis (not her real name) gave up her asylum papers in 2010 in favour of the DZP. She set up a business selling brooms, detergents and mops. She has five children and is separated from their father. But her DZP was never forthcoming. Phyllis has had to put her children on her ex-husband’s refugee application. He is based in Durban. She has spent thousands of rands on transport, taking her children every three months to renew their asylum documents in Durban. She has now sent three of her children to her mother in Zimbabwe.

“While I don’t have anything to hide from my sister… it would be good to have privacy. But I can’t, since I rely on her documents for everything,” she said.

She is scheduled for surgery at Karl Bremer hospital and is worried she might be refused treatment (though this would be illegal).

Chairman of the Zimbabwe Community in South Africa Ngqabutho Nicholas Mabhena said people who gave up their asylum documents in 2010 and never received the DZP were unable to get the 2014 ZSP or the 2017 ZEP. They are also unable to reapply for asylum.

“A person who did not get a DZP cannot be assisted. We are currently negotiating for the SADC Work Visa hoping that those who missed out will be accommodated,” said Mabhena.

GroundUp asked Home Affairs Media Manager David Hlabane if there was any hope for these people especially since they had forgone their asylum in favour of a DZP.

Hlabane replied: “Applications for the new Zimbabwean Exemption Permit (ZEP) closed several months ago, in 2017. The Department is currently adjudicating applications that were received before the closing date, a process which should be completed around October 2018, therefore no new applications can be taken. Requirements for qualifying to apply for the ZEP were also stated publicly, including the condition that the applicants must be holders of the (old) ZSP.”

© 2018 GroundUp.
This article is licensed under a Creative Commons Attribution-NoDerivatives 4.0 International License.