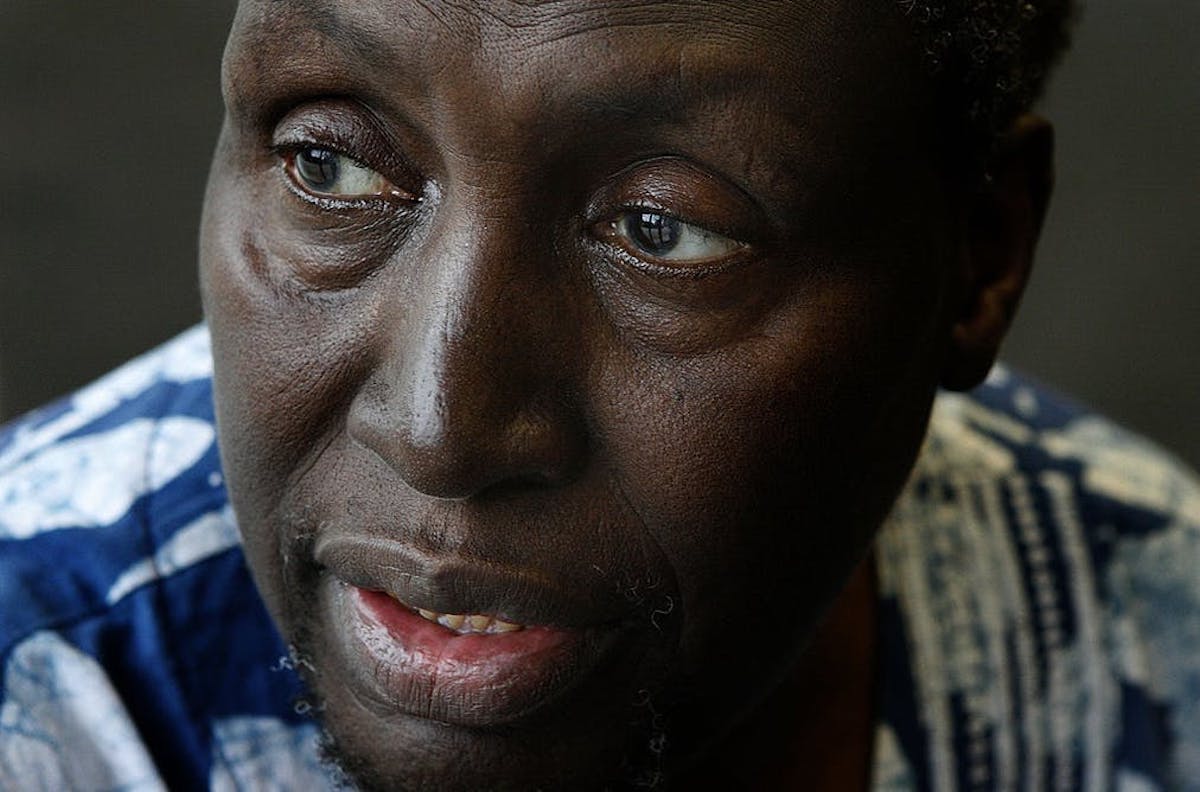 As Kenya marked its 59th anniversary of internal self-rule on 1 June 2022, a controversial play by the nation’s foremost author, Ngũgĩ wa Thiong’o, was staged in sold-out shows. It had been 45 years since it was banned and the author detained. The performance offers a useful filter to illuminate how the nation has fared in recent years.

Without a doubt, Ngaahika Ndeenda (I Will Marry When I Want) is the most consequential piece of writing by Ngũgĩ wa Thiong’o and his collaborator, the late Ngũgĩ wa Mirii. The drama tells the story of Kiguunda, a peasant whose tiny strip of earth is being targeted by Ahab Kioi, a local tycoon who represents international financial interests.

Using multiple story threads, the play captures the tempestuous romance between Kiguunda’s daughter and Kioi’s son, which results in an unwanted pregnancy and a bleak future. Kiguunda’s delusion of a white wedding as social leverage leads to nothing but mockery and dispossession.

Within months of its writing and subsequent staging, in late 1977, Ngũgĩ was detained without trial. Under Kenya’s old constitution, which was replaced by a more progressive one in 2010, it was lawful for the president to detain anyone without trial. Although the reason for Ngũgĩ’s detention has never been given, he told me recently its timing affirmed he had been targeted for writing in his indigenous language, Gikuyu:

I thought: Wait a minute, I have been writing in English over the years and nobody ever bothered with me. I write one play in Gikuyu and I’m detained, so I’m going to write in Gikuyu…

Ngũgĩ spent a year at the Kamiti Maximum Security Prison. His detention helped shine a light on Kenya’s human rights record. It also shaped his life in writing and political activism.

Released in 1978, after the death of Kenya’s first president, Jomo Kenyatta, Ngũgĩ was denied the right to return to his old job at the University of Nairobi. He went into exile in 1982. Although the rest of his books were not banned, they were not taught in Kenyan schools for the next two decades.

In a sense, Ngaahika Ndeenda was both a point of departure and a point of return.

From activism to exile

In 1967, Ngũgĩ recorded in Decolonising the Mind how colonial power structures reproduce through education and the imposition of European languages and literature in Africa:

After I had written A Grain of Wheat I underwent a crisis. I knew whom I was writing about but whom was I writing for … In an interview in 1967 with Union News, a student newspaper in Leeds University, I said: ‘I have reached a point of crisis. I don’t know whether it is worth any longer writing in English.‘

In 1977, Ngũgĩ returned to his village in Limuru, just outside Nairobi, and mobilised the community to build a makeshift community theatre. This was to protest their denied access to the Kenya National Theatre.

He and Mirii scripted a play they thought reflected the realities that confronted ordinary villagers and factory workers in Limuru, subsisting on the verge of destitution. The actors, too, were ordinary workers and peasants from Limuru.

In a recent conversation, Ngũgĩ reflected on this:

I still believe in the power of ordinary peasants in narrating their experience.

The open-air theatre in Kamiriithu was razed by the government. Ngũgĩ was detained. His co-author, Mirii, fled to Zimbabwe, as did the play’s director, Kimani Gecau.

In detention, Ngũgĩ produced the allegorical Caitani Mutharaba-ini (Devil on the Cross), which he wrote on toilet paper in Kamiti, alongside the prison memoir Detained. It was while promoting these two texts in London, in July 1982, that Ngũgĩ received a coded message warning him he’d receive “red carpet treatment” upon his return.

He returned to Kenya only in July 2004, after multiparty democracy had been restored. Although he was mobbed by hordes of ordinary Kenyans at the airport, his return had a tinge of tragedy. He was brutally attacked and his wife raped.

The return of Ngaahika Ndeenda to Kenyan theatres re-introduces the work to generations of Kenyans who were not yet born before the play’s initial release and subsequent exile of the author. It also marks the evolution of the nation’s artistic freedom arena.

“(Jomo) Kenyatta put me in a maximum security prison. Moi drove me into exile. Uhuru (Kenyatta) received me at the State House,” Ngugi says, recalling the 2014 visit when he was hosted by Kenya’s current president.

While Kenyatta’s hosting of a former dissident is a powerful visual of reform and expanding democratic space, the social ills that Ngũgĩ highlighted 45 years ago still fester.

The core themes in Ngaahika Ndeenda – social inequities and justice – have universal appeal. Nairobi’s youthful population turned up to watch the new production, as did the urban expatriate community. But there were also enthusiasts bussed in from distant rural locations. They had no tickets, which had to be purchased in advance, online.

Ngahiika Ndeenda is prescient in its vision of a land riven with class strife, greed and avarice.

Ngũgĩ is now polishing a Gikuyu version of his first novel, The River Between, now titled Rui Rwa Muoyo (or The River of Life). He calls the process “restoration”: returning to African languages narratives that have been domiciled in European-language granaries.

Young people need to know it is possible to write and perform in African languages. They need to be reminded of that possibility.