Offloading climate responsibility on the victims of Climate Change
Advertisement 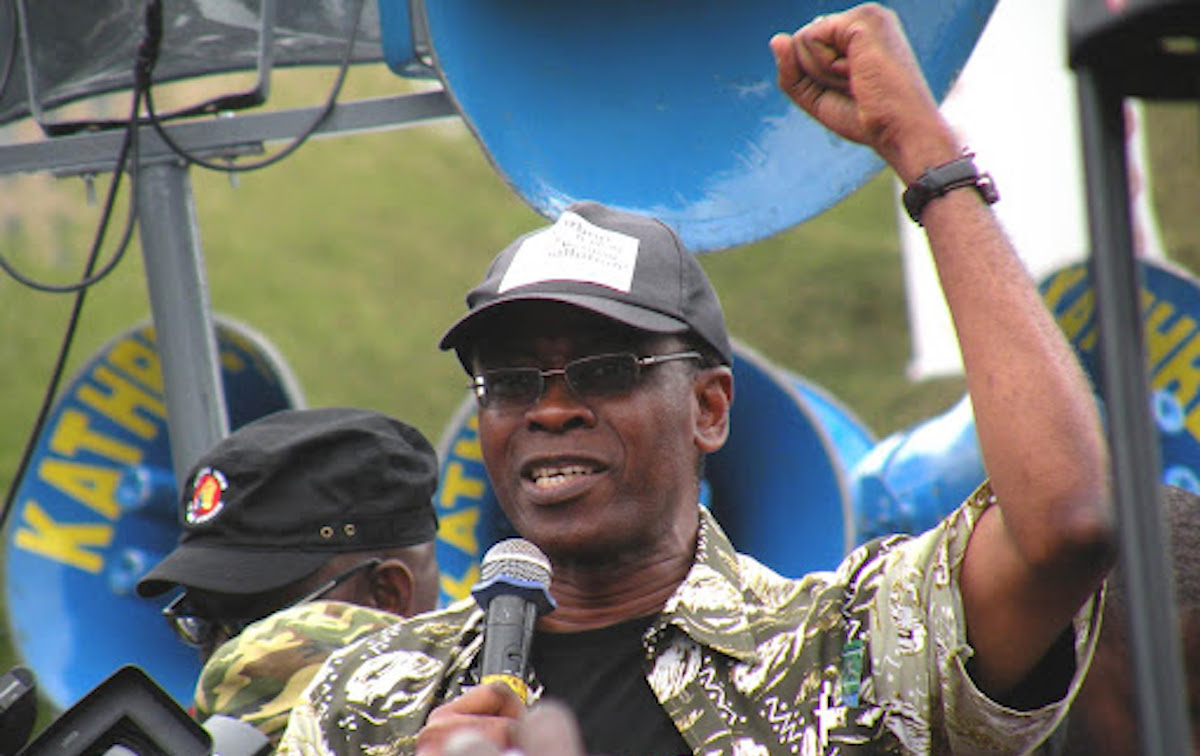 In this interview, Nnimmo Bassey, a Nigerian architect and award-winning environmentalist, author, and poet, talks about the history of exploitation of the African continent, the failure of the international community to recognize the climate debt owed to the Global South, and the United Nations Climate Change Conference that will take place in Egypt in November 2022.

Bassey has written (such as in his book To Cook a Continent) and spoken about the economic exploitation of nature and the oppression of people based on his firsthand experience. Although he does not often write or speak about his personal experiences, his early years were punctuated by civil war motivated in part by “a fight about oil, or who controls the oil.”

Bassey has taken square aim at the military-petroleum complex in fighting gas flaring in the Niger Delta. This dangerous undertaking cost fellow activist and poet Ken Saro-Wiwa his life in 1995.

Seeing deep connections that lead to what he calls “simple solutions” to complex problems like climate change, Bassey emphasizes the right of nature to exist in its own right and the importance of living in balance with nature, and rejects the proposal of false climate solutions that would advance exploitation and the financialization of nature that threatens our existence on a “planet that can well do without us.”

Bassey chaired Friends of the Earth International from 2008 through 2012 and was executive director of Environmental Rights Action for two decades. He was a co-recipient of the 2010 Right Livelihood Award, the recipient of the 2012 Rafto Prize, a human rights award, and in 2009, was named one of Time magazine’s Heroes of the Environment. Bassey is the director of Health of Mother Earth Foundation, an ecological think tank, and a board member of Global Justice Ecology Project.

Steve Taylor: Climate change is a complex problem, but maybe there’s a simple solution. What might that look like?

Nnimmo Bassey: Simple solutions are avoided in today’s world because they don’t support capital. And capital is ruling the world. Life is simpler than people think. So, the complex problems we have today—they’re all man-made, human-made by our love of complexities. But the idea of capital accumulation has led to massive losses and massive destruction and has led the world to the brink. The simple solution that we need, if we’re talking about warming, is this: Leave the carbon in the ground, leave the oil in the soil, [and] leave the coal in the hole. Simple as that. When people leave the fossils in the ground, they are seen as anti-progress and anti-development, whereas these are the real climate champions: People like the Ogoni people in the Niger Delta, the territory where Ken Saro-Wiwa was murdered by the Nigerian state in 1995. Now the Ogoni people have kept the oil in their territory in the ground since 1993. That is millions upon millions of tons of carbon locked up in the ground. That is climate action. That is real carbon sequestration.

ST: Could you talk about the climate debt that is owed to the Global South in general, and African nations in particular?

NB: There’s no doubt that there is climate debt, and indeed an ecological debt owed to the Global South, and Africa in particular. It has become clear that the sort of exploitation and consumption that has gone on over the years has become a big problem, not just for the regions that were exploited, but for the entire world. The argument we’re hearing is that if the financial value is not placed on nature, nobody’s going to respect or protect nature. Now, why was no financial cost placed on the territories that were damaged? Why were they exploited and sacrificed without any consideration or thought about what the value is to those who live in the territory, and those who use those resources? So, if we’re to go the full way with this argument of putting price tags on nature so that nature can be respected, then you have to also look at the historical harm and damage that’s been done, place a price tag on it, recognize that this is a debt that is owed, and have it paid.

ST: You’ve discussed in our interview how some policies meant to address climate change are “false solutions,” particularly those intended to address the climate debt owed to the Global South and to Africa in particular. Could you talk a bit about the misnomer of the Global North’s proposals of so-called “nature-based solutions” to the climate crisis that claim to emulate the practices and wisdom of Indigenous communities in ecological stewardship, but which actually seem like an extension of colonial exploitation—rationalizations to allow the richer nations that are responsible for the pollution to continue polluting.

NB: The narrative has been so cleverly constructed that when you hear, for example, reducing emissions from deforestation and forest degradation (REDD), everybody says, “Yes, we want to do that.” And now we’re heading to “nature-based solutions.” Who doesn’t want nature-based solutions? Nature provided the solution to the challenges [that Indigenous people have] had for centuries, for millennia. And now, some clever people appropriate the terminology. So that by the time Indigenous communities say they want nature-based solutions, the clever people will say, “well, that’s what we’re talking about.” Whereas they’re not talking about that at all. Everything’s about generating value chains and revenue, completely forgetting about who we are as part of nature. So, the entire scheme has been one insult after another. The very idea of putting a price on the services of Mother Earth, and appropriating financial capital from those resources, from this process, is another horrible way by which people are being exploited.

ST: How does REDD adversely impact local communities on the African continent?

NB: REDD is a great idea, which should be supported by everyone merely looking at that label. But the devil is in the detail. It is made by securing or appropriating or grabbing some forest territory, and then declaring that to be a REDD forest. And now once that is done, what becomes paramount is that it is no longer a forest of trees. It is now a forest of carbon, a carbon sink. So, if you look at the trees, you don’t see them as ecosystems. You don’t see them as living communities. You see them as carbon stock. And that immediately sets a different kind of relationship between those who are living in the forest, those who need the forest, and those who are now the owners of the forest. And so, it’s because of that logic that [some] communities in Africa have lost access to their forests, or lost access to the use of their forests, the way they’d been using [them] for centuries.

ST: As an activist, you have done some dangerous work opposing gas flaring. Could you tell us about gas flaring and how it impacts the Niger Delta?

NB: Gas flaring, simply put, is setting gas on fire in the oil fields. Because when crude oil is extracted in some locations, it could come out of the ground with natural gas and with water, and other chemicals. The gas that comes out of the well with the oil can be easily reinjected into the well. And that is almost like carbon capture and storage. It goes into the well and also helps to push out more oil from the well. So you have more carbon released into the atmosphere. Secondly, the gas can be collected and utilized for industrial purposes or for cooking, or processed for liquefied natural gas. Or the gas could just be set on fire. And that’s what we have, at many points—probably over 120 locations in the Niger Delta. So you have these giant furnaces. They pump a terrible cocktail of dangerous elements into the atmosphere, sometimes in the middle of where communities [reside], and sometimes horizontally, not [with] vertical stacks. So you have birth defects, [and] all kinds of diseases imaginable, caused by gas flaring. It also reduces agricultural productivity, up to one kilometer from the location of the furnace.

ST: The UN climate conference COP27 is coming up in Egypt. Is there any hope for some real change here?

NB: The only hope I see with the COP is the hope of what people can do outside the COP. The mobilizations that the COPs generate in meetings across the world—people talking about climate change, people taking real action, and Indigenous groups organizing and choosing different methods of agriculture that help cool the planet. People just doing what they can—that to me is what holds hope. The COP itself is a rigged process that works in a very colonial manner, offloading climate responsibility on the victims of climate change.

Editor’s note: This interview has been edited for clarity and length from the author’s conversation with Nnimmo Bassey on October 7, 2022. For access to the full interview’s audio and transcript, you can stream this episode on Breaking Green’s website or wherever you get your podcasts. Breaking Greenis produced by Global Justice Ecology Project.

By Steve Taylor
Author Bio:
Steve Taylor is the press secretary for Global Justice Ecology Projectand the host of the podcast Breaking Green. Beginning his environmental work in the 1990s opposing clearcutting in Shawnee National Forest, Taylor was awarded the Leo and Kay Drey Award for Leadership from the Missouri Coalition for the Environmentfor his work as co-founder of the Times Beach Action Group.
Source:Independent Media Institute
Credit Line:This article was produced by Earth | Food | Life, a project of the Independent Media Institute.
Advertisement
Related Topics:
Up Next

A new chapter in India-Africa relations?