Marry Christmas, if she’ll have you!
Advertisement 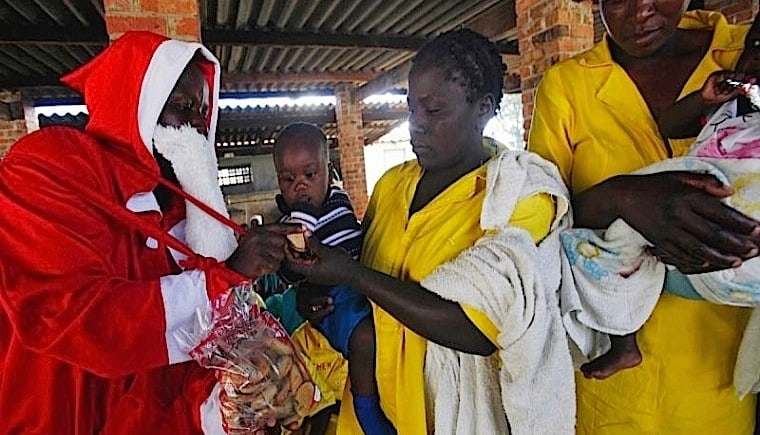 Christmas is upon us, that merry season when we remember that time Father Christmas aka Santa Claus aka Master Burglar gave Joseph an illegitimate son, Kwanzaa, who grew up to be an Anti-Semite who pissed on Jewish culture and was lynched on a tree like a common criminal by the colonial authorities for disturbing the peace and resurrected as a bunny that lays eggs in April. Kwanza was born at the height of the Palestinian winter which the Bible says will kill you if you go out at night to pee (they didn’t have indoor lavatories at that time) even though shepherds were out there smoking angel dust and having angelic hallucinations and seeing moving stars. Spark up that hash in memory of those brave men who said the Bible was lying and decided to stay up all night watching the stars and their flocks in the winter night. Twenty one puff Salute!

I love Christmas, and God is not an adulterer, even though he impregnated someone’s wife…she was a virgin after all and according the law an unconsummated wedding is not a real marriage (see the annulment of Pope Borgia’s daughter’s marriage). We honour the gift of the sky, Kwanza, the immaculate son of the heavens who belongs in the same book, by virtue of immaculate deception, as Hercules, Helen of Troy, Guatemala Buddha, and every other bastard child of the Supreme God.

According to the Financial Gazette, cash-strapped consumers have kicked off preparations for critical New Year expenses like school fees early, at the expense of Christmas festivities. Photo: AP

It’s that time of the year, when we imbibe like the good old folk at Caana, down twelve barrels of premium wine and wake up with a month-long hangover called January. Yes sir, do not accuse me of ungodly behaviour, get thee behind me Satan, I have the right verse for you, Luke 7 vs 33-35: ‘for John came neither eating bread nor drinking wine; and ye say, He hath a devil. (I don’t have a devil, so I drink!)* The Son of man is come eating and drinking; and ye say, Behold a gluttonous man, and a winebibber (I like the version that says ‘drunkard’, ‘winebibber’ is too euphemistic)* a friend of publicans (not republicans)* and sinners! But wisdom is justified of all her children’.

There you have it folks, an endorsement for all the imbibing we are going to do, but remember, wisdom is justified by her children. Me, for example, I won’t spend a single cent on booze, I’ll be scavenging at parties, and when January disease strikes, I will have the cure: loaning money to ya’ll bastards who were buying me booze and charging 100% interest on it. You will take it, because your kids need to go back to school. And you will pay it back, with the interest, or get an ass-whooping like you owed Steward Gilligan Griffin money.

Hello season of diabolic partying, drinking and whoring, hallelujah! The pestive season, skimpy un-slinky-skink-like skinny skanks skanking and scampering! Oh we are going to have fun, debauchery I think is the biblical term. Of course there will be a lot of road carnage, I suppose the Satanists need to get high off alcoholic blood. I hope they will be throwing those sex-parties in Harare. Quite frankly I feel insulted I haven’t been invited to one of those, clearly someone lacks respect for my swordsmanship. What does a man have to do for an invite to an orgy, you want to see my demo? Okay mother****ers (assuming there are MILFS), I will be holding auditions for my sex tape tomorrow!

Christmas is a wonderful time for giving. If anyone out there is wondering what to give me, well, clearly I lost my mind eons ago, how about head? Haha! Guess what I got Graca Machel for Christmas? A head of state! I got a book for Tinoponda Katsande…on how to have decent sex…especially if you are going to put it on tape and the rest of us have to see it. While I’m still in my wife-beater and bashing lousy sex-tapes, guess who else I got a gift for? Stunner, it’s a blowup doll, get some training on her to poke-her-low, and say thank you, I saved the world from bad porn and you from bad sex, which as you know, equals being dumped live on Big Brother. Can’t figure out what to get Bob, he hasn’t used to last three coffins I bought him. I might just settle for a red necktie, like MDC red, embroider his logo, you know it:

If you are not old enough to read Greek, that’s Alpha and Omega. Aka Black God. Hey I hear he wants to give his wife a country for Christmas. Wrapped in rife strife, unemployment and gamatox.

Oh yes, and it’s time to watch my favourite Christmas movies, like that Morgan Tsvangirai tape where he says Robert Mugabe (played by The Grinch) stole Christmas. It will be in fellowship with my brothers in the diaspora who can’t come home with their corny accents (yeah right, go to South Africa for a year at the age of twenty-one and you miraculously forget your native tongue. I feel you man, do what you gotta do. Survival is the name of the game), gold teeth, stories of how awesome Mzansi is and how awful Zimbabwe is, like we care, and of course the cheap phones they pawn us to go back to their Jozi hustle. Oh gentle tear, why dost thou linger-linger linger?

How best to conclude this detestable literary excrement? A poem, a poem, a Christmas poem!

Lamb on a braai stand
That looks like a manger,
Men unwisened by drink lead
Virgins after the pop star;
Jerusalema, Jerusalema,
Dance of her father’s nightmares!
Brush of satin on denim,
Joseph’s son is hammered,
He winces, not from the gin
But the desire to take
Another man’s wife, or daughter.
Maria sprawled on the grass,
Virginity spills with rosé
Wine is red, like crucifixion.

*The words in parenthesis appear nowhere in the King James Version.