Xenophobia in South Africa: how family members influenced Nigerians to flee or stay 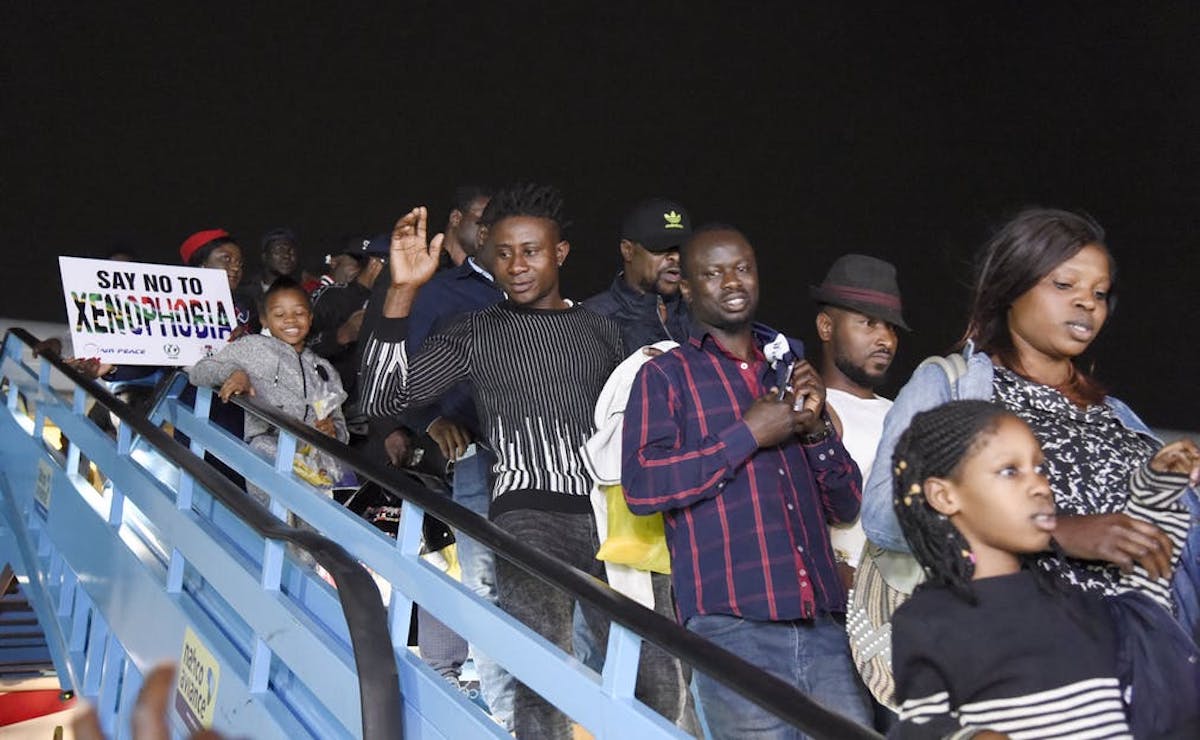 Businesses belonging to African immigrants were looted, burned and destroyed. People were assaulted. Between January and September 2019 South Africa recorded 68 attacks and 18 people died. More than 147 shops were looted. Immigrants in South Africa commonly hail from countries like Zimbabwe, Nigeria, Angola, Somalia and the Democratic Republic of Congo.

During the 2019 attacks Nigerians – especially those who had family members in South Africa – pressured the government to evacuate Nigerian migrants.

In a study I set out to establish to what extent these relatives contributed to Nigerian migrants’ decision to return. And what these return strategies revealed about how important families are to taking migration decisions.

My study involved online interviews with Nigerian immigrants in South Africa who stayed put, as well as six people based in Nigeria with transnational family members in South Africa.

This was supplemented with analysis of secondary interviews with returnees conducted by three reporters from Nigeria’s Vanguard, Punch, Nigerian Tribune and the Nation newspapers. The interviews were conducted at Murtala Muhammed International Airport as people returned home on state-provided aeroplanes.

The limitations of the data obtained through these sources included lacking firsthand contact with the returnees. In addition, the sample size was too small to make generalisations.

Nonetheless, my study was able to provide insights into the complex role that families play in these return decisions. The findings entrench the central role of family in decisions taken by migrants, whether they chose to stay put in South Africa or to return home.

Those migrants who accepted the Nigerian government’s offer of help to return home fell into three categories.

The first were people who had suffered direct losses to their businesses and livelihoods. Second, there were those who feared they might become victims. Third, those who were stranded in South Africa even before the xenophobic violence.

The strategies of return showed how the family was pivotal in reaching decisions of ‘who’, ‘how’, and ‘when’ to return.

In some instances affected Nigerian families in South Africa decided to reduce potential victimisation by sending their children to their families in Nigeria while the father and mother remained in South Africa. A 12-year female returnee from Ogun State expressed this as follows:

The crisis in town and the discrimination in my school become unbearable. So my parents decided that my sister and I should come back home to continue with our studies. We live in Johannesburg with our parents. People are dying and their shops are burnt. Our parents are still in South Africa. They will soon join us.

Chinasa, a 33 years old Nigerian, lived in Pretoria and returned with her child but her husband stayed in South Africa temporarily. She said:

I came back with my child. My husband will join us later. I thank God I am home now; at least this is my country. I am ready to face the challenges here. I know it is not easy coming back home with nothing but my life is first.

But some families prevented family members returning. In some cases this involved husbands refusing to give their wives their approval to flee South Africa. Or refusing to give permission for children to return. One respondent explained:

Some women who wished to leave (return to Nigeria) with their children were asked to present letters of consent from their husbands. Many of them who could not provide the letters were also said to have gone back home after spending several hours at the airport.

Many Nigerians decided to remain in South Africa. This decision was affected by a myriad of factors including investments in the country and marriage. As one migrant stated:

It is not as if I do not want to return home. But I have already established a business here. I have been here for 20 years and I have seven branches in seven provinces. I have four children, all graduates. Two of them are married to South Africans. I go home every December to spend Christmas with my parents and relatives. Tell me if I leave here where would I start from?

Beyond these two factors, family care responsibilities – needing to earn money in South Africa to support family – prevented many from deciding to return even if they wished to.

The findings underscore the importance of family in the decisions that migrants make. In some instances families facilitated the decision to return. In others they thwarted people who wanted to return home.

The study shows the important role family plays in influencing both migration intentions and actual practices. It also explained how predetermined aspirations of both migrants and their families contribute to their understanding of social realities and even xenophobic violence.

Namibia badly needs refurbishment after 32 years under the ruling party