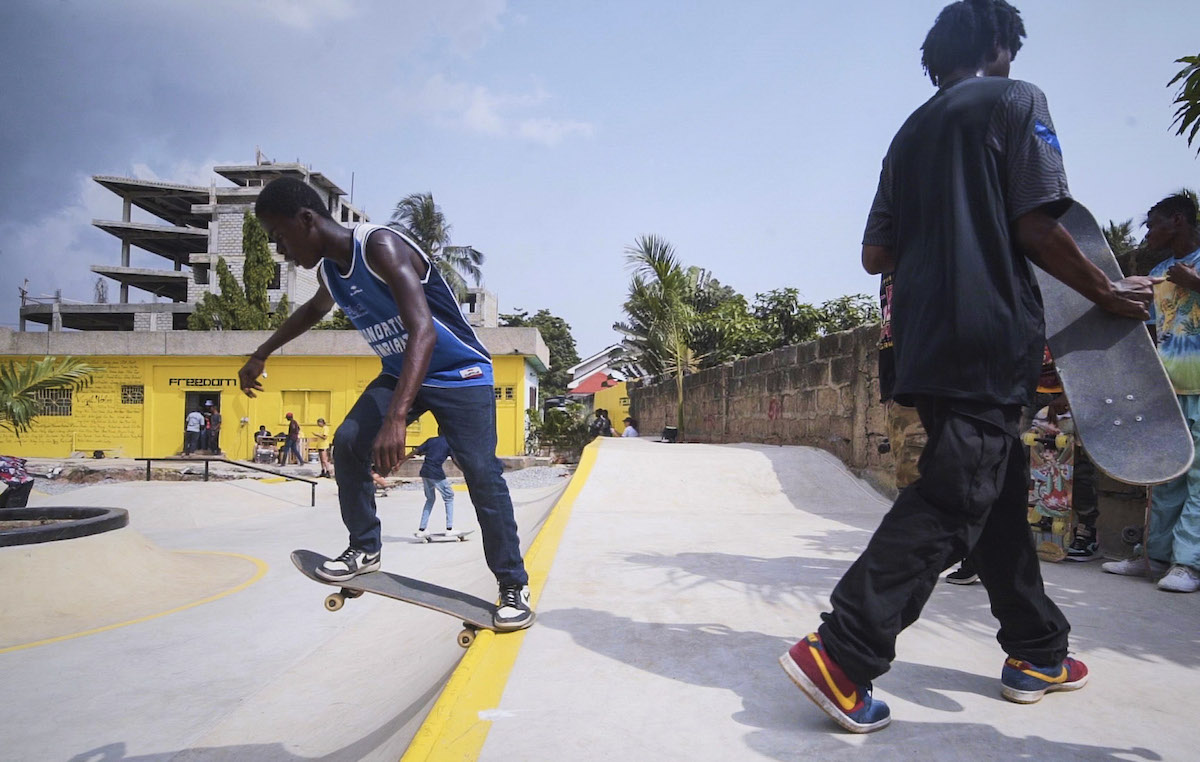 When Sandy Alibo first arrived in Ghana, she was there only on holiday. But the lively and dynamic surfing and skating scene that she discovered made her stay. And since uprooting her life in France, she has been committed to cultivating board sports in the region.

Alibo’s use of social media connected the dispersed skating scene and encouraged a massive rise in new participants, especially young girls. The increased interest in the sport made it more pertinent to have a safe space to accommodate both amateur and skilled skaters. The demand would set Alibo on her greatest career ambition yet: building Ghana’s first skatepark.

Through a robust online crowdfunding project and support from the late renowned fashion designer Virgil Abloh, Ghana saw Freedom Skatepark in the capital city of Accra completed by the end of 2021. The 500m² facility has opened the door for more Ghanaian skaters not only to find the sport but also to thrive in it.

Neither surfing nor skating was organised in Ghana and the country’s small but growing board community went largely unnoticed as board sports are considered to be predominantly white.

Alibo, a skating and surfing enthusiast, first visited in November 2015. She had heard that Accra was a good spot to surf in Africa and quickly found and connected with the vibrant surfing and skating scene.

“I was really impressed and surprised. I was really happy because when you are in France, people brainwash you about what Africa looks like and what Ghana looks like. When I came, I totally realised that the place is amazing and I felt it was one of the best experiences of my life. As a Black person, as a Caribbean person and as a person who loves sports, I was enthusiastic to discover Ghana and see another [skating] community that was doing a lot of things, but invisible,” she says.

The experience changed the trajectory of Alibo’s life. She left a cosy job and comfortable life in France and moved to Ghana at the beginning of 2016, a decision she made with no hesitation.

“When I left, I realised that I needed to go back. I met amazing people here. Ghana is joy and it’s so peaceful. It’s a slow life that everyone deserves,” says Alibo. “When I was in France, I was working more with a business perspective and here, I’m working with a social impact perspective – working on giving back to society rather than return on investment. I learned so many things about myself and what I like, and that is priceless. I think Ghana showed me another way to live and another way to rediscover myself. That’s why I decided to come back.”

Once she had settled in, one of the first things she did was create the Surf Ghana Instagram account. It would become an aggregator of the skating and surfing community, the connective tissue between skaters and surfers in Accra and across the country. The account drew a lot of attention and currently has more than 23 000 followers. Because of it, more and more Ghanaians who had not previously been exposed to board sports wanted to join, but did not have the resources.

Alibo would go back and forth between France and Ghana to collect equipment for children and, soon enough, Surf Ghana was no longer just an Instagram account, it became a non-governmental organisation and the country’s first skateboarding club. Using her work experience as a sports brand manager, Alibo began to host events, festivals, skateboard demonstrations and surf/skating courses. She also organised skate trips and invited skaters from different parts of the country. All these efforts were in the name of highlighting people who are overlooked in terms of representation and financial support in the sport.

“I just noticed the lack of representation and how you could be in Ghana and not see a lot of Ghanaians surfing. I wanted to change that. We needed to change the mentality of people and change the perception to create a culture of surfing and skateboarding for Ghanaians.”

As a woman, it was important for Alibo to emphasise and provide additional support for girls to give them an easy entry point into the sport. She created the Skate Gal Club in 2019 to address and correct the gender gap that exists on a local and global level. When she started the club, there were about 60 girls. That number has grown to about 200. On Thursdays, Freedom Skatepark is closed for women-only skate sessions, where girls get unimpeded time to practise without the intimidating presence of guys.

“Again, there was a lack of representation. If you don’t see Black women skating, then naturally a lot of them feel like it’s something they should not do. What I noticed is that when you create a safe space where they see how it works, it will encourage them. For the past six years with this project, a lot of the boys would come because it’s a male-dominated sport, so the girls would be shy.

“But the day I did a women-only session, all the girls came. I understand and acknowledge the fact that you need the women-only sessions to give them the confidence that they can do it and to fight their fears. What is beautiful is that most of them can skate and compete with men, so now when they skate they are not skating alone, and they are skating with a group.”

Skating was seeing a massive increase in participation, but because it is a niche sport there were no dedicated facilities for children. A lot of skaters practised in places that were dirty and dangerous. They were thought of as a nuisance and in places where they were permitted to skate, “they were just tolerated”, as Alibo puts it. This made it particularly difficult for children starting out and it became more and more apparent that there was a need for a skatepark.

“We started talking about it when we saw the need to have safe spaces. It was becoming frustrating to organise events in places that don’t belong to us. It took some perspective and a vision, but we knew we could do it.”

Alibo started writing proposals to sponsors in 2017. She found some land and the following year started pitching the project. She crowdfunded online and received support from Abloh and brands with a local presence such as Space Accra, Tony’s Chocolonely, Wonders Around the World, Vans, the French development agency and others. Surf Ghana also did fashion collaborations with Abloh’s Off-White label and Daily Paper, which helped raise funds to build the premises and pay for supplies.

It took 24 days to build Freedom Park at a cost of about R930 000. The park was designed in partnership with Accra-based architecture and design studio Limbo, which also provided a blueprint for Alibo and her team for future skateparks. And Wonders Around the World brought volunteers from all over the world to help build the skatepark and host a month-long workshop.

“We did exactly what we planned and developed other spaces like the community garden, the Wi-Fi Café and the skate shop. We wanted to build a skatepark and then work with the community on other projects around that space. We didn’t want to build everything and have people just use the space, we wanted to involve the community in the process of creating and developing the space. We want to create a virtuous ecosystem where it is not only about sports or athlete development but it is about creating job opportunities in Accra – in coaching, journalism, photography and filmmaking through the sport. Having this skatepark and people involved will naturally create jobs and benefit the youth.”

Since its completion, the skatepark has become a popular tourist spot. It has received a lot of media attention and gets visitors from all over the globe, including the likes of internationally renowned musicians Kendrick Lamar and Chance the Rapper. Lamar, the Grammy Award-winning rapper and 2018 Pulitzer Prize for Music recipient, shot part of his Spotify documentary in the skatepark during his visit to Ghana in May.

The skatepark with its Wi-Fi Café and skate shop has not only given Ghanaian youth in the area an outlet through skating, it has also provided employment opportunities. With this momentum, Alibo hopes Ghana will produce world-class skaters that compete on the world stage.

“The skatepark has opened more dialogue between institutions and we’ve been able to create a federation structure. In the future, the federation will help us to participate in competitions abroad, either in Africa, Europe or the United States. We can develop international athletes who can participate in the [Olympic] Games to show what Ghanaians can do. Even though it is a new sport, the kids are really good and they learn really fast. As soon as you have sports infrastructure, people train and become better and it will put Ghana on the map.”

Advertisement
Related Topics:GhanaSportWomen empowerment
Up Next