At Terra Kulture, which has become a constant venue Brymo has performed in, the hall is full. The stage is set: the drums, the piano, the ensemble of violinists, the base and lead guitars, the trumpeters, and the lights. This is not a concert. This is a Sunday evening service in Lagos. But unlike Kanye West, Brymo doesn’t profess love for any God. Neither does he claim allegiance to one. In fact, for him ‘god is in your mind,’ and he shouldn’t have a face. There is no choir, only two backup singers. Brymo drives to the venue wearing a custard yellow native. The car stops and he greets some fans.

It’s a trickle first; one person, two people, a couple dressed for the night alighting from an Uber, a lone man pressing his phone searching for someone before he gets into the venue, a young boy selling nose masks; brisk business. Scents of multiple perfumes mix in the air. Two bouncers at the front of the gate check for tickets. Further ahead inside, two more bouncers and other staff check for tickets. The crowd here is niche, like that of a specific new age church. You know who you will find here.

It is past eight, and the crowd is calling Brymo to come forth. He does not. The flock does not dictate to the shepherd. Darkness engulfs the hall. As more people come in they try to find their way to their seats by using the torch from their phones. Lanre Lawal, Brymo’s manager and the CEO of The Bail Music Company is in shorts, putting everything in place. When I call him, it is someone else that picks up. The theme for today’s service is Blasphemy! In this service you can curse, you can use words like fuck, you can break the rules. And Brymo breaks many rules. Like dancing naked under a bridge in Lagos while playing a grand piano. Like singing words like ‘prick no get shoulder.’ Like calling himself the greatest over and over. Or calling himself a god. For every god, every great person, there is a cult. And sometimes almost a near destruction. Brymo has a cult. 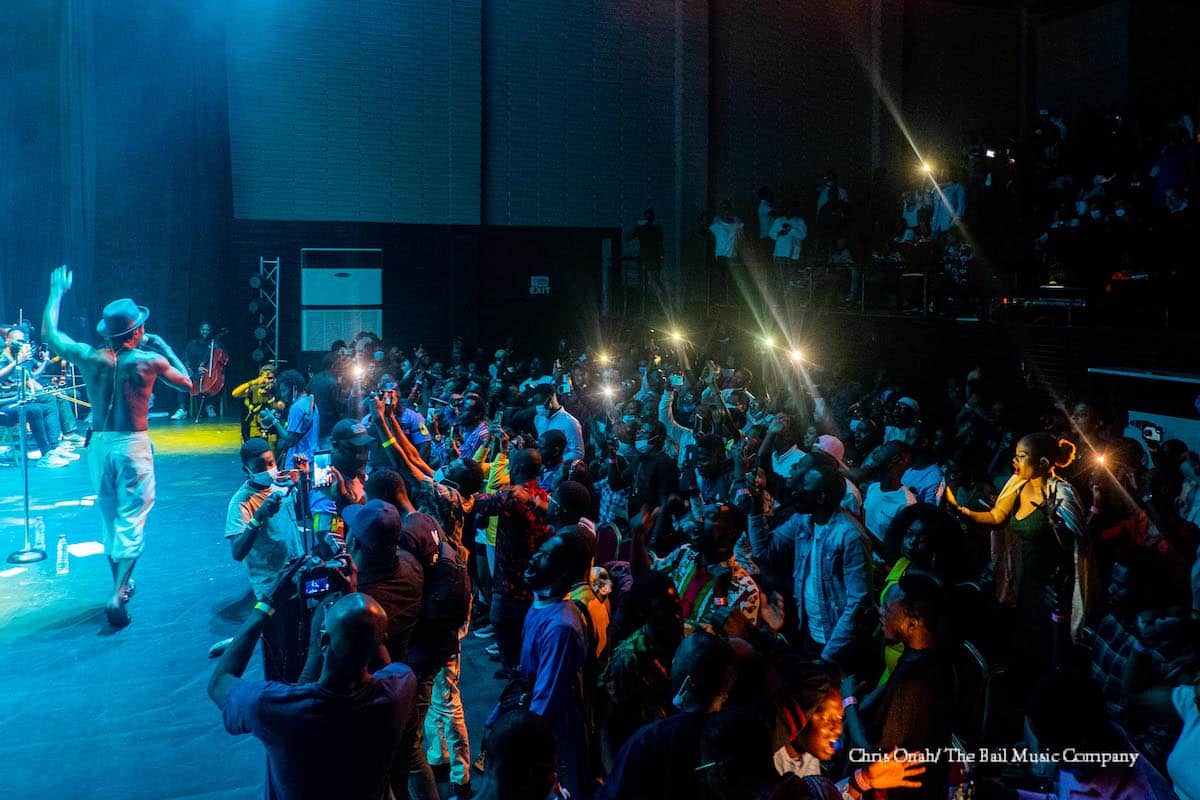 Darkness still engulfs the hall. A man walks unto the stage. A light shines on him. And the crowd screams. He wears a white top which isn’t exactly a shirt. And a white three quarter shorts. He holds a paper which he drops on the stage, almost oblivious of the crowd as if he expects them to always be here. The crowd is going wild. He says nothing. Lowers the mic stand as the instrumental intro plays, and as if requesting to the crowd he sings with his eyes closed, ‘take my hands again, we will never be lost again.’ The congregation responds and sings back ‘I do it all again, I choose to be with you again.’ It is almost like two people feeding each other with words of affirmation, feeding each others souls. In the middle of the performance, the crowd, serenaded by Brymo’s voice, bursts into energetic shouts as if trying to comprehend the madness they’re witnessing. The man to my left is in awe. He’s been to Asa’s concert and ranks her a bit higher in performance. But yet, somehow, listening to Brymo perform he feels rooted, transformed. If ‘fockshit’ was a person, it’d be that man.

By the second song, Strippers and White Lines, from his new album Yellow, Brymo walks with the mic in his hand and sits on the stage, like a sage telling a story, ‘All over the world I’m known, But I’m still the kid from the ghetto.’ The congregation responds, ‘where I’m from the tithe is the tax,’ and carries Brymo’s voice in theirs. Brymo lifts the mic to the crowd and they complete the lyrics to the song. The crowd is the choir. The crowd is the congregation. The crowd is the consumer. ‘Oh what a night.’ Despite Brymo not having the kind of global recognition other Nigerian musicians like Asa, Burna Boy, Davido, and Wizkid have, he always proclaims, that he is the best musician in the world. Or his album, Yellow, is the best released in the world. And maybe it is. 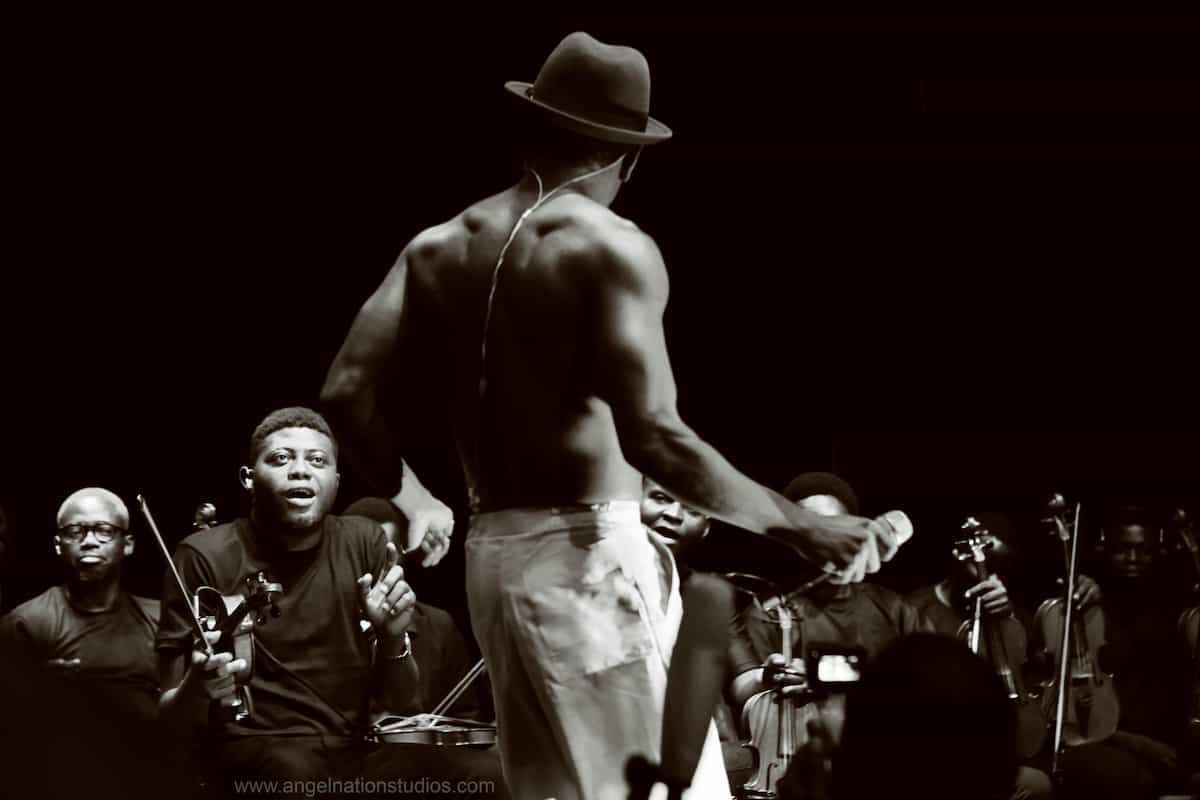 The new generation Nigerian church is cosmopolitan, just like this crowd. A blend of lots of English songs with a bit of Yoruba songs. The sound of the talking drum is like the introduction of an old spirit. Everyone jumps up. Before the lyrics are out, they know the song, and they dance an old dance, where they swing their waist in unison to the talking drum, echoing the lyrics of ‘Olumo.’ But when Brymo sings Ọ̀run n Móoru; about heaven getting heated, and the King’s house on fire, the Chiefs saying the King has no money but still gets fat, the audience mellows down in a way that says we are your flock, you are our shepherd, feed our soul. Sometimes, they sing ahead of him, not following the tempo. But this is what happens when a crowd is enveloped and want to sing their heart out. This is a worship session. And this crowd sings each word out. Brymo is shirtless. His hat is still on. He is back at the mic stand, holding the mic. As if he himself knows that for this song, for the depth and power in it, he must sing it standing still.

The man beside me says he’s ticked off attending Lauryn Hill’s concert, and now Brymo’s. He says listening to Brymo is like being in a Cold Play concert. As the show goes on, Brymo talks of wanting to perform one of his songs in a full stadium with more than a hundred string instruments accompanying him. From mellow songs, Brymo gets the crowd on its feet, and they dance singing Rara Rira. He leaves them dancing, gone. And as if a transfiguration has happened in their presence they ask, confused, is he gone? Is that the end of the concert? Why was it so short. Didn’t he say it’ll last till 10pm? Someone comments, daylight robbery. But what better way to leave a church service than when the congregation is on its feet shouting at the top of their voice? The Sunday evening service has ended, but the people want more.