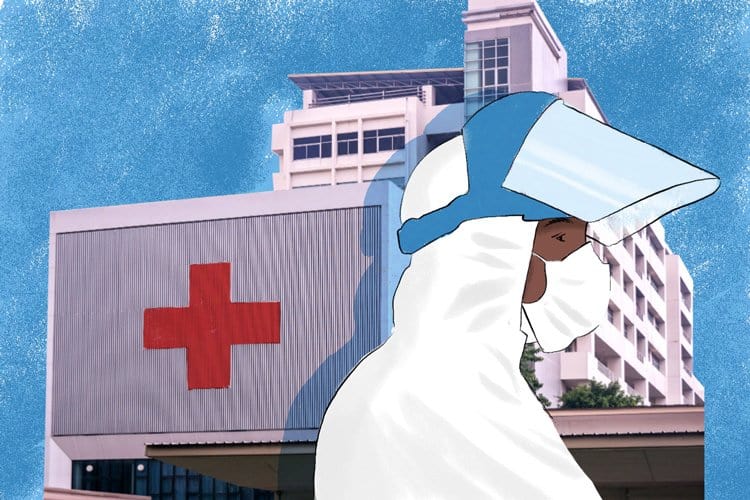 The Lancet has published the results of an analysis of how critically ill Covid-19 patients did at 64 hospitals in Egypt, Ethiopia, Ghana, Kenya, Libya, Malawi, Mozambique, Niger, Nigeria, and South Africa. Illustration: Lisa Nelson

Death rates among adults in the 30 days after being admitted to critical care with suspected or confirmed Covid-19 was considerably higher (48%) in ten African countries, compared to the global average of 31.5%.

This was the outcome of an observational study from 64 hospitals in Egypt, Ethiopia, Ghana, Kenya, Libya, Malawi, Mozambique, Niger, Nigeria, and South Africa done between May and December 2020.

The research was published on Friday in the leading medical journal The Lancet.

About half (3,752/6,779) of patients with suspected or confirmed Covid-19 infection referred to critical care were admitted. Of those, 3 140 patients participated in the study. All participants received standard care and were followed up for at least 30 days unless they died or were discharged.

Until now, little has been known about how Covid-19 was affecting critically ill patients in Africa as there has been no reported clinical outcomes data from Africa or patient management data in low-resource settings (except for an earlier version of this study).

A critical factor in these excess deaths may be a lack of intensive care resources and the under-use of what’s available. For example, half of patients died without being given oxygen. While 68% of hospitals had access to renal dialysis, only 10% of severely ill patients received it.

The provision of dialysis is seven times lower, and the provision of ECMO (to oxygenate blood) is 14 times lower than required to adequately treat Covid-19 patients in this study. But, 17% of the hospitals have access to ECMO, and despite evidence to support its use in Covid-19 patients with respiratory failure, fewer than 1% received it. Even basic inexpensive equipment such as pulse oximetry, to monitor blood oxygen levels, is in short supply.

Professor Bruce Biccard from Groote Schuur Hospital and the University of Cape Town, who co-led the research, says: “Our study is the first to give a detailed and comprehensive picture of what is happening to people who are severely ill with Covid-19 in Africa, with data from multiple countries and hospitals. Sadly, it indicates that our ability to provide sufficient care is compromised by a shortage of critical care beds and limited resources within intensive care units.”

He explains: “Poor access to potential life-saving interventions such as dialysis, proning (turning patients on their front to improve breathing), and blood oxygen monitoring could be factors in the deaths of these patients, and may also partly explain why one in eight patients had therapy withdrawn or limited. We hope these findings can help prioritise resources and guide the management of severely ill patients – and ultimately save lives – in resource-limited settings around the world.”

Interim results from this study, with similar but less detailed findings, were reported in 2020.

The authors wrote that their study included predominantly tertiary hospitals, yet pulse oximetry was not universally available. It is likely that lower-level hospitals with less resourced critical care units might have had worse outcomes, they say. Also many patients may have died before they were able to reach an appropriate critical care unit.

The patients in the study were generally younger with less severe comorbidities than in similar studies elsewhere. So it is likely that the estimate of excess mortality is an underestimate when matched for age and severity of comorbidities.

In other words the situation is likely worse than the data in this study suggest.

Strategies are needed to mitigate risk in patients with Covid-19 in Africa with coexisting HIV/AIDS, diabetes, chronic liver disease, and kidney disease. It is likely that patient outcomes will continue to be severely compromised until the problems surrounding critical care resource scarcity are addressed, the authors say.

Writing in a comment in The Lancet on the study, Dr Bruce Kirenga and Dr Pauline Byakika-Kibwika from Makerere University, Uganda write:

“It is shocking to see that 68% of hospitals had access to dialysis but only 10% of patients received it, as well as to see that proning was not optimised. It is important to think beyond the availability of resources and to also consider issues of functionality. It is common in Africa to have expensive equipment that is non-functional due to poor maintenance or lack of skilled human resources.

We put an invisible pixel in the article so that we can count traffic to republishers. All analytics tools are solely on our servers. We do not give our logs to any third party. Logs are deleted after two weeks. We do not use any IP address identifying information except to count regional traffic. We are solely interested in counting hits, not tracking users. If you republish, please do not delete the invisible pixel.

Why should South Africans care about Israel’s apartheid?