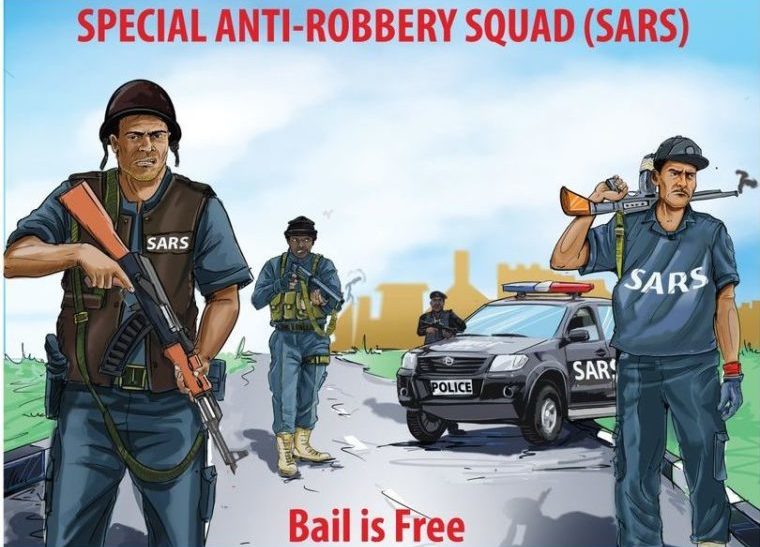 A young Nigerian software developer, Toni Astro, was harassed and assaulted by a unit of the Nigerian Police Force known as the Special Anti-Robbery Squad (SARS) because he carried a laptop. He was immediately accused of being a fraud or what’s popularly known in Nigeria as 419. Astro, who tweeted his experience with the rogue police unit had guns pointed at his legs. The policemen then demanded for $2,760 (1M Naira).

Shocked at the demand the policemen made he was asked to then pay half of the initial amount they had requested for. He was slapped by six policemen who had by this time dragged him to the police station where they were to extort him. Despite presenting a student I.D card, the policemen didn’t listen to him. They threatened to instead take him to Kiri Kiri, a notorious prison in Nigeria.

Astro’s story is just one of the many stories that Nigerian youths have to tell about their experience with SARS. The hashtag #StopRobbingUs kicked off after Astro’s story went viral on Twitter with members of Nigeria’s tech space demanding that action is taken.

Read: Botswana has the best police force in Africa, Nigeria ranked the worst

So yeah 😪, SARZ messed up my Saturday and I get to be locked up because I’m a software developer.
A thread.

Bosun Tijani, the CEO of CcHUB told Techcabal, “Our ask is simple. Stop arresting our colleagues. This is an ongoing concern for Nigeria’s tech community. A talent problem already exists in our sector, yet police, particularly SARS’ harassment, accentuates the talent drain in our industry. This is the central issue for jobs and youth empowerment in Nigeria and the continued, illegal attacks on our country’s young people should be treated as a national emergency. ​Beyond its pro-innovation rhetoric, the Nigerian government continues to turn a blind eye to the robbery and psychological intimidation of young tech talent”.

The hashtag #StopRobbingUs is part of a larger campaign that had hit the Nigerian social media space where there was a demand to #EndSARS. Reform was promised, but the Nigerian police, ranked the worst in Africa in 2017, has changed nothing about its interaction with the public. Its motto, Police is your friend, has been ridiculed and considered an irony to the practices the police is known for.

The Nigerian police, through its Complaint Response Unit responded to Astro’s complaint and acknowledged the complaint. The complaint unit said it had initiated an investigation and forwarded the complaint to the Commissioner of Police, Lagos. Beyond carrying a laptop, wearing dreadlocks, having a good car, having an iPhone are some of the many things that Nigerian youths complain are a source of harassment from the Nigerian police. With Nigerian youths doing more remote jobs and going into the tech industry, they are bound to face tough times from an uneducated and uncouth police unit which should have been banned.

Tag all tech CEOs, young people, youth empowerment champions and reasonable adults on this. Both local and foreign – let us bind together to end this oppression. Drop everything and get behind this. ENOUGH! https://t.co/jaP5UtSz6j

Fela Kuti was not a prophet, it is the Nigerian society that hasn’t changed