Rest assured, queerphobic leaders are the first to trample on the human rights of us all
Advertisement 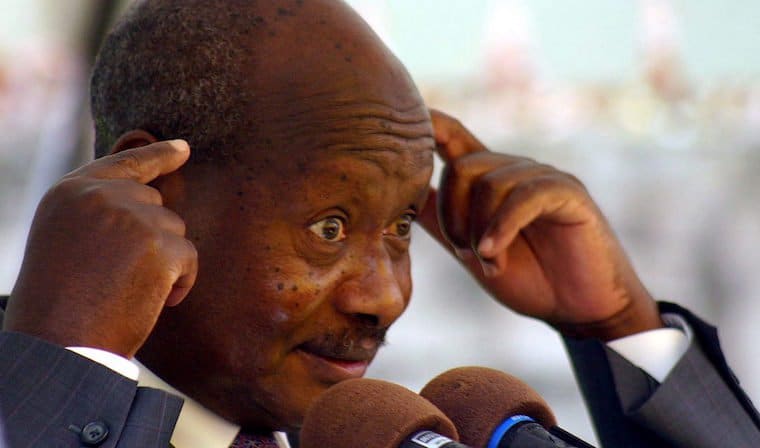 The Kenya Film Classification Board recently banned Rafiki, a film depicting love between LGBTQI+ characters, from being shown in its cinemas. Kenya’s leader, President Uhuru Kenyatta, said the rights of LGBTQI+ people in Kenya were of no importance to the nation right now. President Buhari of Nigeria said that LGBTQI+ rights were not important to him. Uganda’s President Yoweri Museveni made us laugh a bit when he warned against oral sex, claiming the mouth was for eating food only. The manufacturers of (flavoured) condoms were probably also left in stitches. Zimbabwe’s President Emmerson Mnangagwa made it clear that he would not champion the rights of LGBTQI+ folks in Zimbabwe, despite his near-convincing talk of fostering love and reconciliatory peace in the nation. The man has shown himself to be no different from his predecessor – his mentor, Robert Mugabe – whose hatred of the marginalised community was as blatant as it was violent. And many fellow Africans applaud this, just as many were rubbed up the wrong way when British Prime Minister Theresa May apologised for the role Britain played in the criminalisation of same-gender relations in former colonies.

Because LGBTQI+ rights are “not human rights”.

Because queerness is “a threat to our African values”.

Because queerness is “a form of Western neo-colonialism”.

Because queerness is “as unnatural as it is un-African”.

Because queerness is “a plague that must be curbed at all cost, lest the young and gullible children are infected by it as well”.

So many reasons are used to justify the hatred and degrading treatment that LGBTQI+ people continue to endure in Africa. Even those who speak of building and maintaining democracy in Africa while highlighting the need for the upholding of fundamental human rights, some of whom even call themselves human rights activists or defenders, tend to be dismissive of the plight of LGBTQI+ folks. Indeed, queerphobia is the factor that unites most of our African leaders and fellow Africans. Interestingly, the foundations of that unity are shaky because there is more to our African leaders than the anti-LGBTQI+ stance that they are patted on their backs for. Those who advocate for intersectionality in our activism clearly understand this.

Our leaders seem to forget or are unwilling to open themselves up to one universal truth: Humans are not a homogenous group in so many respects. Our differences manifest in various aspects of our lives. Acknowledging these differences is one thing and seeing them as being equally valid is quite another. Unfortunately, many have not been keen to acknowledge that our human differences also manifest themselves in our sexual orientations. While some have come to acknowledge this, others remain reluctant to also treat the various sexual orientations as being equally valid, regardless of how many people identify with a specific orientation.

Fellow Africans have been led to believe that not embracing this form of human difference is related to our liberation as Africans and central to the preservation of our social mores; “our African culture”. There is, in fact, no such thing, given that Africa is made up of many different people with many different cultures. Our leaders champion this unwillingness to embrace the diversity of human sexualities (and genders). Their dominant voices dictate what is or is not an acceptable form of difference, based on their deeply ingrained beliefs. Instead of accepting and uniting us in our differences, they essentially show themselves to be people who do not tolerate or are unwilling to accept differences due to several learnt reasons that are meant to divide, confuse, dehumanise and conquer.

Our African leaders perpetuate the notion of accepting only human differences that are aligned to a politically or socio-economically dominant people’s beliefs while erasing or suppressing those differences that disturb the dominant systems that inform our way of life. Our presidents have shown themselves to be people who view human differences in a negative light. Leaders who are queerphobic essentially view differences in relation to each other – where one quality or trait is perceived to be natural, good, moral, superior or legitimate while the other is unnatural, bad, immoral, inferior and, thereby, delegitimised and/or eradicated.

Our presidents have been showing themselves to be people who view human differences in a negative light.

The beliefs of our leaders call for greater scrutiny and vigilance from those whom they are meant to serve – us. We cannot afford to view their beliefs and actions in isolation; we need to understand the link between hatred for the LGBTQI+ community and the personality or general leadership style of those in power. While we praise them for their queerphobia, do we stop to think about how the general populace is treated? Do these leaders do whatever they want, unencumbered by constitutional constraints? Do they amend their countries’ constitutions to ensure that they get away with serving their own interests? Do they respect “human rights”? Do the leaders see themselves as servants of their people or are they despotic? How do they handle criticism from their citizenry? What is the level of transparency or corruption in government? Are other genders being given the same opportunities as men to lead or to work for equal pay? How just is the legal system? How is the relationship between the different races or tribes?

Read: Queer women and sexual health: Are you wrapped up sis?

If we fail to see the interconnectedness of these various oppressive systems, we are only making ourselves vulnerable to continued exploitation by our African leaders.

The harsh reality is that hatred for the LGBTQI+ community stems from the same collection of socio-political factors that contribute to sexism, nepotism, tribalism, racism, ableism and so many other oppressive isms. We can continue cheering our leaders on for their anti-queer polices or we can wake up to this realisation. The choice is ours. However, if we fail to see the interconnectedness of these various oppressive systems, we are only making ourselves vulnerable to continued exploitation by our African leaders, many of whom have become self-serving, tyrannical, die-hard men with a vicious hunger for being life-long presidents. Embracing difference is central to the socio-economic and political liberation every African is yearning for. Being united in our powerful differences ensures that those differences are not turned into weapons that are used against us in the service of our authoritarian leaders. The way we treat the LGBTQI+ community and the way we view difference has a place in either our collective progress or in our collective and continued destruction. After all, none of us are free until all of us are free.

Mnangagwa’s Zimbabwe inches forward – but where is it headed?

AfrikaBurn: The whiteness of burning against an African backdrop