When Chris Sambo became one of the earliest notable faces in Zimbabwe to die from COVID-19, many people whose lives Sambo had touched felt the country had lost a towering figure who, without doubt, would have joined the first against the pandemic.

Health promotion, physical and mental wellbeing had been causes so personal to Sambo, one of Zimbabwe’s most respected sports administrators during his lifetime.

Sambo was diabetic, on medication, and had family members affected by other chronic diseases. The selfless philanthropist from Harare therefore understood the plight of the vulnerable in marginalised communities, so he had dedicated his life on efforts to help ease the pain of those affected by HIV, as well as promoting prevention among those at risk of infection.

Sambo, who was an astute Chief Executive Officer (CEO) of Zimbabwe’s Premier Soccer League until the mid-2000s, passed away at the end of July 2020, just five days after celebrating his 69th birthday.

The battle with diabetes was one the seasoned sports official appeared to be winning. Sambo followed a healthy eating lifestyle, and even though he enjoyed an outing with friends at the pub, he would only order the occasional glass of red wine if he was in the mood for a drink.

It also looked like exercise was a regular part of his life. For a man in his late 60s, Sambo still looked in good shape – tall, lean, broad-shouldered, and brisk in movement.

But the emergence of COVID-19, a global pandemic became a new menace for people with underlying medical conditions like Sambo.

“He was fit, and never looked like he was slowly down despite approaching 70,” says Castro Ngole, a former Zimbabwean women’s football administrator who once worked with Sambo.

Research has found out that people with diabetes are more likely to have serious complications with severe COVID-19. Diabetic patients with severe COVID-19 may have a 7.3 percent risk of death, compared with 5.6 percent for those with cancer. The reason for worse prognosis in people with diabetes is indeed multifactorial. Various factors such as age and comorbidities like hypertension contribute to the risk of health complications or worse outcomes.

Succumbing to COVID-19 was the most tragic outcome, but the pandemic had been stalking Sambo in other ways since its outbreak.

Due to a nationwide lockdown that started around the beginning of 2020 as the Coronavirus started to spread, a project so close to Sambo’s heart was forced to a halt at a time the veteran football administrator was looking to take it to the next level.

More than 10 years ago, Sambo founded a women’s football league in Epworth, a poor and overcrowded dormitory settlement  located about 12 kilometres from the Harare city centre, aiming to use the tournament as a tool to fight the stigma of HIV.

The participants in the league were women affected by HIV, and those at risk of contracting the disease, with most being commercial sex workers.

Another idea behind the initiative was for the women to learn means of living positively, sharing thoughts in a recreational environment.

“The league had 16 teams,” comments Francis Zimunya, a former board member of Zimbabwe’s football federation and close friend of Sambo. “He established the league at a time when it was taboo to associate with people living and affected with the HIV virus. He was doing a stellar job in that community.”

The 2020 season was scheduled to begin in March, around the same time the national lockdown which restricted movement started. With the backing of his local and international partners, Sambo was confident of bringing new players into the competition to expand the league to 20 teams.

Impact of COVID-19 on the growth of the football project

No organised football has been played in Zimbabwe since the national lockdowns started in March of 2020. The government has continued to extend the measures as cases of COVID-19 infections kept rising. While the restrictions have recently been eased the impact of the pandemic is still being felt.

In May 2020, Sambo spoke to This is Africa about his work in Epworth, lamenting the emergence of COVID-19. At the time, he described how the pandemic enforced shutdown had hindered more exciting plans which he envisaged. 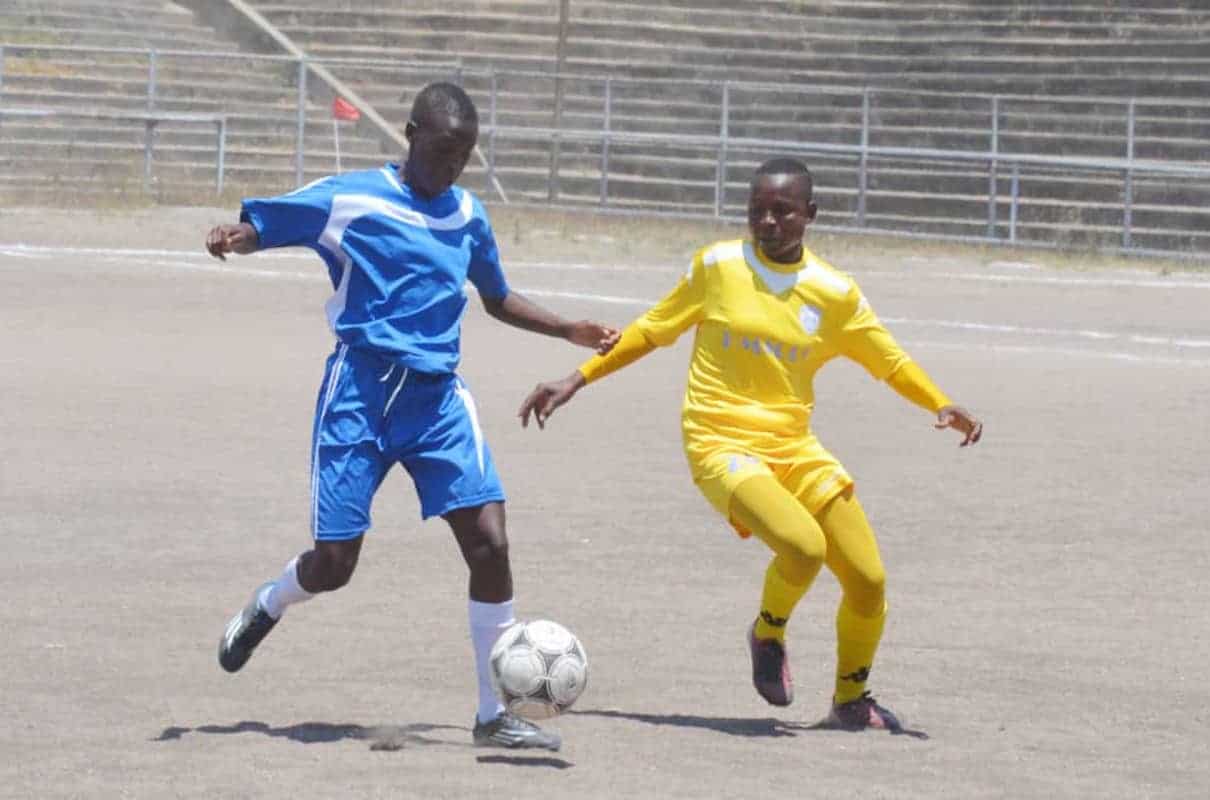 Partners from abroad, who had been charmed by Sambo’s work with the women living in Epworth, had booked flights to Zimbabwe to witness the launch of a new season. The 2020 season, he said, was set to involve more players and more teams.

Funds had been pledged by international partners to begin construction of a state-of-the-arts sports complex, with work scheduled to commence mid-2020, but unfortunately all the plans fell apart.

The much respected Benjamin Ticharwa, a lifelong Epworth resident and community leader was one of the first residents to volunteer his services to Sambo’s initiative.

In an interview with This is Africa, 51-year-old Ticharwa echoed the late Sambo’s sentiments that 2020 would have proved a turning point for the Positive Women Football League and health awareness efforts in one of Zimbabwe’s poorest neighbourhoods.

Sex work and crime are big issues in Epworth. Ticharwa, who was born in the area and has lived in Epworth all his life is particularly concerned about the levels of prostitution in his home area.

A self-employed transport operator, Ticharwa has three daughters, aged 20 years and below, who are still living with the family in Epworth. He says he has raised his children to be disciplined, responsible and God-fearing young women – amidst a sea of mostly poverty-driven juvenile delinquencies.

Whilst he is proud to have managed to shield his own family from the prevalent social problems, Ticharwa says he has an in-born commitment to serve the community. When Sambo first came to Epworth to preach the message of positive living and prevention, Ticharwa asked what he could do to help spread the word and make an impact.

On some match days, Ticharwa’s vehicles would ferry players to and from the venue of the games, a rudimentary football pitch at the heart of the suburb.

Speaking to This is Africa about Sambo’s football project and the realities of sex-work in the community Ticharwa said, “The depth of prostitution here is heart-breaking. Girls as young as 13 line up for clients in broad daylight for a charge of as little as a US$1. As somebody who has young beautiful girls, it makes me shed tears to see these young beautiful girls on the street-side putting their health and safety and grave risk”.

“When Mr Sambo first came here, I had been told about him by a client of mine who knew him well, and I was immediately impressed by what he was trying to do for our community. A meeting was organised between me and Mr Sambo alongside his partners in the project. They asked me to get involved. I said ‘why not’, I told them I will get involved in my own humble way,” Ticharawa added. The community organiser said he was raising his daughters and teaching them to make the right decisions in life. He hopes that through the football project the young women in the community and on the streets would also see that it’s not too late to make the right decisions and choices.

A future in limbo

With the death of Sambo, the disruptions caused by COVID-19 and the restrictions the pandemic brought, the future of the project is hanging in the balance.

Last year, more equipment, facilities and learning materials were supposed to arrive from “partners in Europe” to coincide with the beginning of the new season.

“Mr Sambo said to me, ‘Ben, please talk to the ladies, there is more coming this new year and please let’s have more players coming through,’” says Ticharwa. “In 2019 I had met one of the partners from Sweden, who arranged a meeting with me to get a local insight into the situation in Epworth, and the work we were doing. They had promised us more support beginning 2020”.

That, of course, didn’t happen with the indefinite suspension of all sporting activities and international travel.

One of the participants, 23-year-old *Michelle Nyakudya (name changed) played for one of the league’s teams until the 2019 season. Michelle who is a commercial sex worker says she doesn’t know her health status. She has never been tested in her life because she fears for the worst due to the nature of her work.

*Michelle says she fell in love with the football programme, and hopes that one day life will normalises again, and when the league resumes, the women of Epworth can gather to exchange notes and play the beautiful game.

Speaking about her experience with the league, *Michelle says, “since I became a commercial sex worker at the age of 16, I had never felt better about myself until the Positive Women League taught me that all hope wasn’t lost for me”. “I have been in this work for too long now, and there are times I feel so depressed and I just want to give up on life. I grew up enjoying watching football. Now playing it, and being taught about HIV at the same time, I feel more secure. I feel I am still worth something,” *Michelle added.

While life could return to normal, it is however not clear how the project will proceed in Epworth following the demise of Sambo. The need for the project to resume is still evident, and the beneficiaries of the project hope they will play again. For the women of Epworth, COVID-19 has dealt them a double blow, but they patiently wait for the day they will resume playing.

*Names have been changed to protect the identity of the person.