Rejecting the “exoticism” of African art 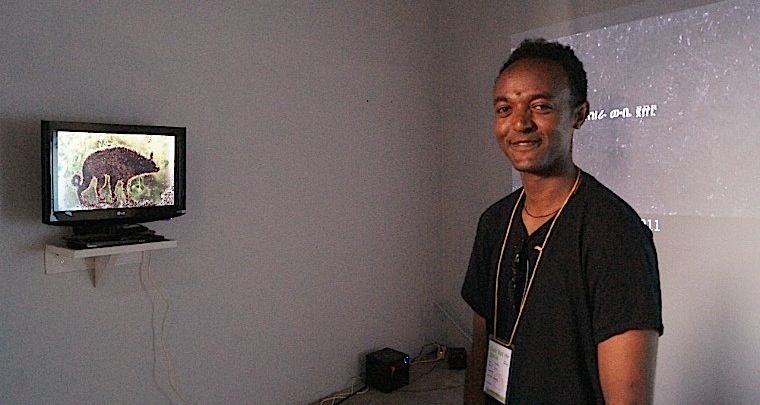 A goat, a dog and a donkey are walking down a dusty road, each in desperate need of a taxi. Soon enough one whirls by, kicking up dust in its wake. The animals manage to flag it down and jump in. Upon reaching their various destinations, each responds differently to the issue of payment: the dog overpays; the goat cheats by running off without paying anything at all; and the donkey pays the exact fare.

This Ethiopian folktale has been told for generations (since early in the last century) to explain why certain animals act the way they do around motor vehicles. Thus dogs chase cars as if saying “You owe me money; I want my change”; goats run from cars as if plagued by persistent guilt; and donkeys, having paid the full fee, feel they have nothing to fear, and are entitled to take their time and calmly block the passage of any oncoming vehicles.

This folklore has been simultaneously preserved and given new life in the form of artist Ezra Wube’s stop-frame animation video Hisab.

Wube is a stop action animation video artist from Ethiopia who now calls the USA home. Of life in America, he says, “I just don’t want to be called ‘the Ethiopian artist’ I feel like that’s becoming problematic for me I just want to be ‘artist’”.

He is exhibiting two video installations at this year’s Dakar Biennale aka Dak’Art aka the 11th Biennale of Contemporary African Art (which opened on May 9th and runs till the 8th of June), both inspired by traditional Ethiopian folklore and the desire to preserve stories. Wube says the Hisab story is a familiar one in Ethiopia, “…it’s something you would hear in a coffee house or on a bus something like really very mundane… it actually interests me because like it’s so insignificant but if you really look at it, I feel like it’s actually very poetic and it has lots of larger social political context.”

The story is also symbolic on a deeper level. “It’s also about this never-ending tension between tradition and modernity, between nature and machine, because you always struggle with people and progress,” explains Wube.

The second video, a more personal piece, is based on a story Wube’s grandmother once told him while sitting one day in her kitchen. After her death, Wube decided to visually depict the story – animating it with objects from a kitchen. “I was using elements in the kitchen like food, types of grain like beans, all the stuff she raised me with,” says Wube. “It’s about modernity and tradition, keeping the past and moving forward.”

Screenshot from the second

This is Wube’s first time in West Africa and he says it’s an honour to be part of the Biennale. “It’s so amazing just being on the continent and meeting all these various points of views and perspectives, it has huge symbolism for me emotionally,” he says. He explains that being able to connect with like-minded artists from across Africa and the diaspora has been hugely beneficial and comforting. “I feel like it reflects the way I’m struggling too, and it’s nice to see other artists being fed up with that and trying to re-appropriate what’s been appropriated, what’s ‘African’ you know. Some people think of Africa and they think of African masks, you know, it’s crazy,” said Wube.

He is also very wary of the ‘exoticism’ often attached to African art. “My piece here, all of the elements you see, if I screened this in Ethiopia everybody knows that it’s like the very mundane everyday reality but outside Africa it becomes exotic, and that’s something most African artists in the Diaspora struggle with. You want to do what’s so familiar to you but what’s familiar to you is not necessarily familiar where you are … and where you are is not who you are, you are part something else.”

Wube’s upbringing – spending 18 years in Ethiopia – before moving to the USA and having to give up his Ethiopian passport to become an American citizen most definitely shaped his artistic style and informed the issues he seeks to raise in his works. Having seen only black people people during his entire childhood, Wube says it was strange to arrive in America and be told he was ‘black’; he’d never previously considered his race, nor the kind of weight that race is given in African-American circles in America and in the African Diaspora in general.

But, as Wube so emphatically states, he rejects the notion of himself as the ‘umbrella voice’ for all ‘Ethiopian’ art as, truly, he sees himself first and foremost simply as: Artist.

How to make a film about America