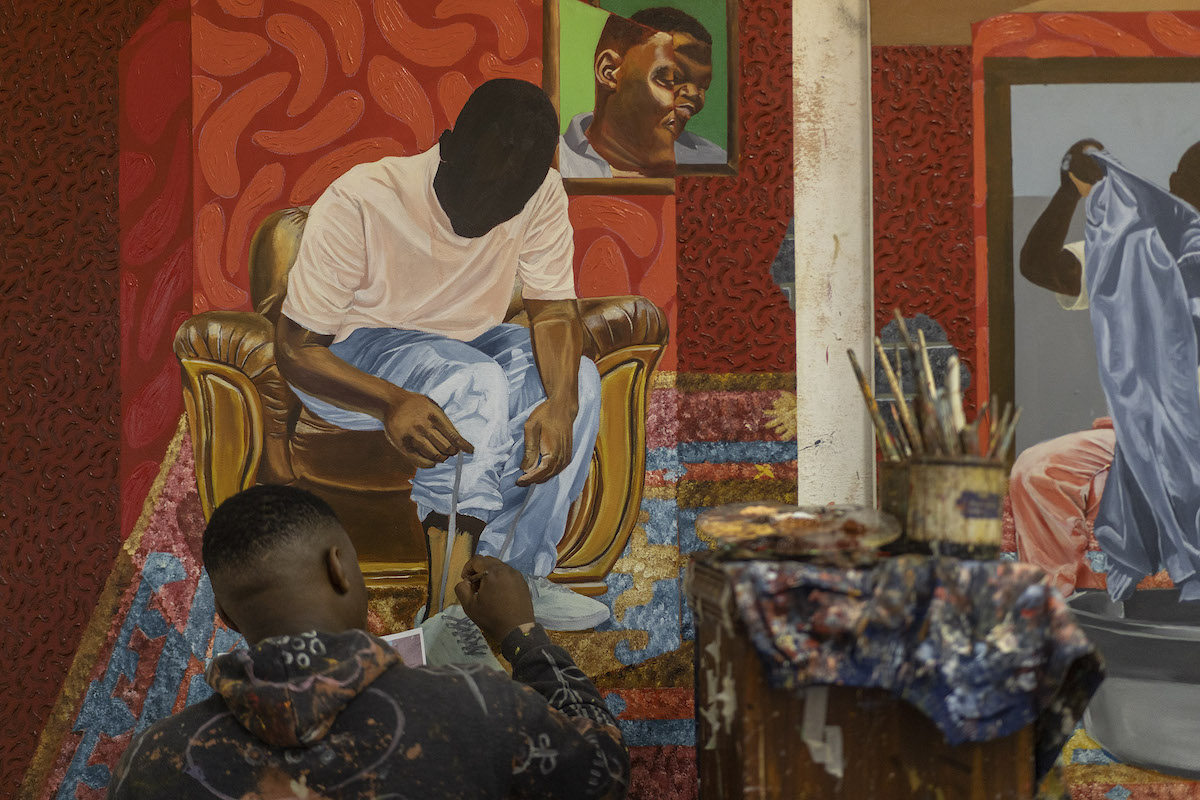 At 28, Feni Chulumanco seems like another early-career artist with a familiar story. People might presume that his journey has been linear: passing through art school then gaining entry into the professional art world. But the major developments in his career, which have occurred in the past 12 months, seemingly came out of nowhere, and his story is anything but mundane.

Last year Chulumanco had a solo stand with Ebony Curated at the Cape Town International Art Fair, where all seven of his works on show were bought. At present, he is working on pieces for a solo show at Ebony as well as two group shows: one at SMAC in Cape Town and another in Italy.

This pace meets his own incessant drive, an urgency that is not propelled by selling, but by striving to be better. Chulumanco usually arrives at Greatmore Studios to start his workday at 7am.

In his studio, a work in progress hangs on the wall. It is a triptych set in his grandmother’s home in Langa. Chulumanco moved there with his mother and siblings when his grandmother died, just before he went to high school.

Until then, they had been living in Crossroads in a two-room house, to which his mother had later added two extra rooms using money she made as a domestic worker. During this time, Chulumanco had his first encounter with a creative craft.

One of his friends had an uncle who had a “sewing place” at the Nyanga taxi rank. Around the age of 11 they would make the long walk to visit him there. Chulumanco would stand and stare at the uncle while he worked, transfixed by the rhythmic movement of the sewing.

“I used to pay attention to that process. Once you’re doing something practical in front of me, I will just watch you while you are doing the process. And then when I catch that, I will practise on my own until I master it,” says Chulumanco.

Once he mastered sewing, he started making slippers from carpeting. Word got out and neighbours started paying him to repair their shoes, so he began earning enough money to buy lunch at school from his newfound craft. Later, his curiosity was piqued by electronics, and he started fixing broken radios.

“In the community, the houses are so close, you know everything. When I began doing things, everyone in my neighbourhood saw that,” he says.

His aptitude for fixing electronic appliances led his mother and the adults around him to pressure him to study maths and physics at high school. When he enrolled at Isilimela High in Langa, he met Xoliswa Nkunzi, first artistic mentor, and began leaning towards pursuing art.

But two years on in grade 10, Chulumanco decided to take maths and physics instead of art and design, yielding to pressure from his mother. When Nkunzi became aware of this, she told him: “If you are not doing this subject, you must know, it’s the end of your life. You’re not going anywhere.” He knew that she was right, but challenging his elders was not easy.

“You need to be stubborn sometimes … In the Black community, old people will tell you, ‘I’m teaching you this, so you must follow this’, and it’s true in some things, but in others you need to make your own decisions,” he says.

Chulumanco continued doing art. “I was so happy creating designs, painting, and my class teacher was encouraging in return,” he says.

Towards the end of Chulumanco’s time at high school, a friend of his elder sister introduced him to his cousin, the artist Ayanda Mabulu. Having recently read about him in a Cape Argus article his teacher brought to class, he was familiar with the artist. Chulumanco showed him some of his drawings and Mabulu’s response was very encouraging.

“You know, this is possible, this can take you far … not anyone can draw this,” Mabulu told him, before going on to show him his artworks and photographs from a recent trip to China. Nkunzi had told the class about artists she had taught who had become successful overseas, but meeting Mabulu had made tangible the idea of being a successful artist.

Mabulu told Chulumanco that he could call on him any time for advice, and that after he had finished high school he was welcome to paint with him at his studio in Greatmore.

Chulumanco matriculated and applied to study design at the Cape Town University of Technology to ease his mother’s mind. She was adamant that he study further. But he used the excuse of the fees costing too much (which they did) to get out of it, and joined Mabulu in his studio instead.

Having met Mabulu, his mother felt comfortable with the arrangement. She made sure that Chulumanco treated it as a job. “If I am disciplined today it is because of [my mother] … I can stand here for long hours working because of her influence,” he says.

The year that followed was important in Chulumanco’s development as an artist. Mabulu, who was already sharing his studio with his younger brother, gave Chulumanco space as well. He took them to the city and introduced them to gallerists and took them to exhibitions. With Chulumanco he shared his experience of becoming a successful artist with only a matric, and highlighted the value in struggling to make art at the beginning of his career.

Chulumanco asked lots of questions, absorbing as much as he could, feeding his curiosity. Mabulu, in turn, was encouraging. “He used to say, ‘You can do this even more than me. And then you can be a better artist than me. Don’t work to be on the same level with me. Just work beyond’,” Chulumanco recalls.

After a year had passed Mabulu moved to Johannesburg. He invited Chulumanco to work with him there, but “something [prompted me to] build my own journey. With Mabulu everything was there, paint, material, food. I wanted to build my own hustle,” he says.

Chulumanco went back to painting at home. He would give himself activities every day, and developed a routine of going to the library to read the newspapers in the morning, then he would visit Guga S’thebe Arts and Culture Centre to use their internet and search for funding.

He was awarded funding for materials by the AVA gallery and bought primary colours and a roll of brown paper. Nkunzi had taught the class how to mix colours and he had become good at it, mixing the colours he couldn’t afford to buy.

Wanting people to see the art he was making, Chulumanco painted some onto a jacket he wore everywhere he went. It caught the eye of Marco Morgan, who worked at Guga S’thebe. He asked him to join the art centre. Eventually Chulumanco did, and started painting postcards to sell to tourists.

But his breakthrough came when he applied for a studio at Greatmore from the kitchen in his grandmother’s home – the one spot where he could connect to cheaply available Wi-Fi. He was awarded it, and chose to work in his mentor Mabulu’s old space. He now shares it with his own younger brother, who appears in many of his artworks.

The figures in Chulumanco’s paintings are encased in prisms that appear lighter than their surroundings, representing what he calls self-isolation.

“So I grew up as a ‘self-isolated’ person, but it doesn’t mean that I can’t live with people. I can, but most of the time, I like my space. I’ve learned a lot by spending time on my own. That’s why you will find me most of the time and I’m always locking myself inside the studio, practising painting,” he says.

The presence of his brother and mother in his paintings speaks to the strong bond they have. “I’m working with my background,” says Chulumanco.

At this stage in his trajectory, his technique continues to improve as he works to perfect his craft, just like when he was a child trying to perfect the sewing technique of his friend’s uncle.

“I want to grow all the time. I want to see my work as a successful piece for myself. Not from others. So if you don’t like my work, it’s fine. I love it,” says the artist.