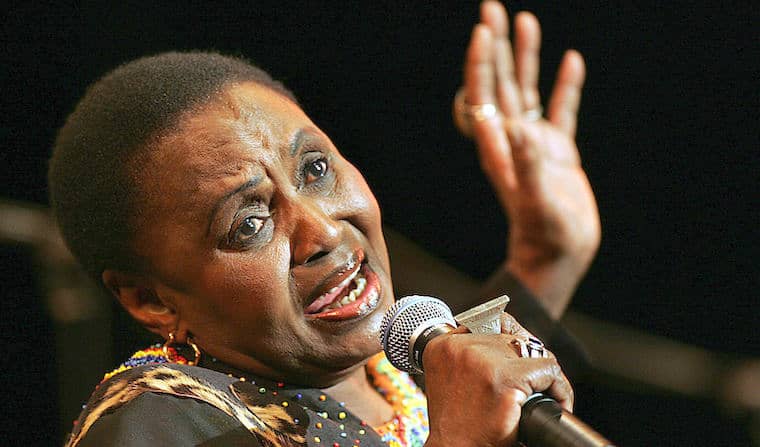 Born in South Africa on 4 March 1932, Makeba was a remarkable singer, and fiery civil rights activist.

Makeba was born in a township suburb of Johannesburg, and she undoubtedly remains one of the finest voices the world of song has ever heard, and she surely ranks among the most popular artists in South Africa’s music history.

Makeba started her musical career in the  early 1950s, and she was part of various musical acts (singing with Manhattan Brothers and later the Sunbeams also known as Skylarks), and she build a strong reputation as a talented singer. She toured with the jazz-influenced musical King Kong, (1959) which consolidated her reputation as one of the best voices in the music industry.

She was the first black musician to be forced to leave South Africa because of apartheid, and she first stayed in Europe before eventually settling in America.

While in America Makeba made contact with other South African artists in exile who included Letta Mbulu, Hugh Masekela and Jonas Gwangwa. She went on to work with various American artists on successful musical projects throughout the years until her return to South Africa after spending 30 years in exile.

During her 30 years in exile she remained a vocal opponent of apartheid and dedicated her life to fighting inequality, injustice, and racism through her music. Makeba embodied the spirit of Pan Africanism, and yearned for an equal, peaceful, democratic and united South Africa and continent.

A picture taken in 1978 shows South African singer Miriam Makeba. Former South African president Nelson Mandela on November 10, 2008 hailed singing legend Miriam Makeba, who died in Italy aged 76, as “a mother to our struggle and to the young nation of ours”. Miriam Makeba, the singer who became the musical symbol of the black struggle against apartheid, died after collapsing at a concert in Italy. She was 76. Photo: ANP/AFP

Mama Africa has over 40 albums (studio albums, live albums and compilations) to her name. She won several national (South African Music Award) and international awards for her musical accomplishments including a Grammy award. Makeba was voted 38th in the Top 100 Great South Africans.

We remember this legend through her music, which undoubtedly left an indelible mark.