One of the most memorable underdog fairy-tales in the history of cricket’s World Cup – Kenya’s astonishing march to the semi-finals of the 2003 edition – was built around the heroics of a young leg-spinner called Collins Obuya.

Obuya had modelled himself in the art of leg-spin after the great Shane Warne, and it was fitting that his hero was a key member of the powerful Australia team that went on to lift that World Cup 19 years ago, their third title.

“He (Warne) inspired a lot of young players during our time to take up leg-spin bowling,” Steve Tikolo, who captained Kenya in that World Cup, tells This Is Africa.

“There are two names in Kenya that come up: Collins Obuya, whose achievements we all know from the successful 2003 World Cup for Kenya. Then there is Zafir Din, who played for Kenya on a number of occasions. Zafir Din could turn the ball a mile, and he had the wrong one too. We nicknamed him ‘Warnie’ for his ability to turn the ball big, with good control.”

50-year-old Tikolo, the best player Kenya has produced, further pays tribute to Australian and world cricket legend Warne, who died aged 52 on the 4th of March, of a suspected heart attack while holidaying in Thailand.

“Shane Warne will always be remembered as a legend of the game, one of the greatest spinners of our time,” continues Tikolo, regarded as one of the best players in the world never to play Test cricket.

Warne’s “ball of the century”

“Together with (Sri Lanka legend) Muttiah Muralitharan, they revolutionised the art of spin bowling. He was one of the top spinners that I faced – a tough competitor on the field but a gentleman off it. It is a sad time for the game of cricket all over the world to lose a legend at such a time. We mourn with family, friends, the Australian cricket fraternity and the country as a whole. May his soul rest in eternal peace.”

Only Muttiah Muralitharan has more Test wickets than the sports idol.

The Zimbabwean cricket development stalwart, who groomed a great number of Zimbabwe’s best-known black cricketers and went on to coach the national team – draws attention to Warne’s marvellous delivery to dismiss England’s Mike Gatting in the 1993 Ashes series, famously known as the “ball of the century” in the cricketing world.

“A dark space indeed has engulfed the global cricket fraternity with the news of the death of the monumental giant of the game, on and off the field, Shane Warne,” Mangongo tells TIA.

“The cricketing world has been robbed of a piece of it’s fabric. The Mike Gatting dismissal shall remain a fairy-tale. It was that Shane Warne dazzling magic. Shane had the charisma on the cricket field, so was his skills-sets.”

Mangongo, a firm believer in the natural ability of indigenous African cricketers, is presently setting up an ambitious Pan-African cricket academy to be based in Ugandan capital Kampala. He remarks that the feats of global superstars like Warne should be used to inspire future generations of world-class cricketers from the continent.

To him, the iconic Australian is a genuine hero of the game to millions of the game’s followers worldwide.

“Shane Warne was in the class of the game’s giants, such as (West Indies luminary) Sir Viv Richards, who shaped the course of a match single-handedly on many, many good days. It is extremely sad that the gentleman’s game has been robbed of one of its stars,” adds Mangongo.

Mangongo’s sentiments are echoed by one of Warne’s Zimbabwean protégé, Prosper Utseya, a township cricketer from Harare and off-spinner who rose to captain his country in limited-overs cricket, including at the 2007 World Cup.

“Shane Warne made me fall in love with the art of spin-bowling,” says Utseya. “He excelled in the world of cricket and sport, which was very inspiring. I grew up watching him and I’m genuinely shocked and saddened to hear the news of his passing. To his family, friends and ex-teammates, I offer my condolences.” 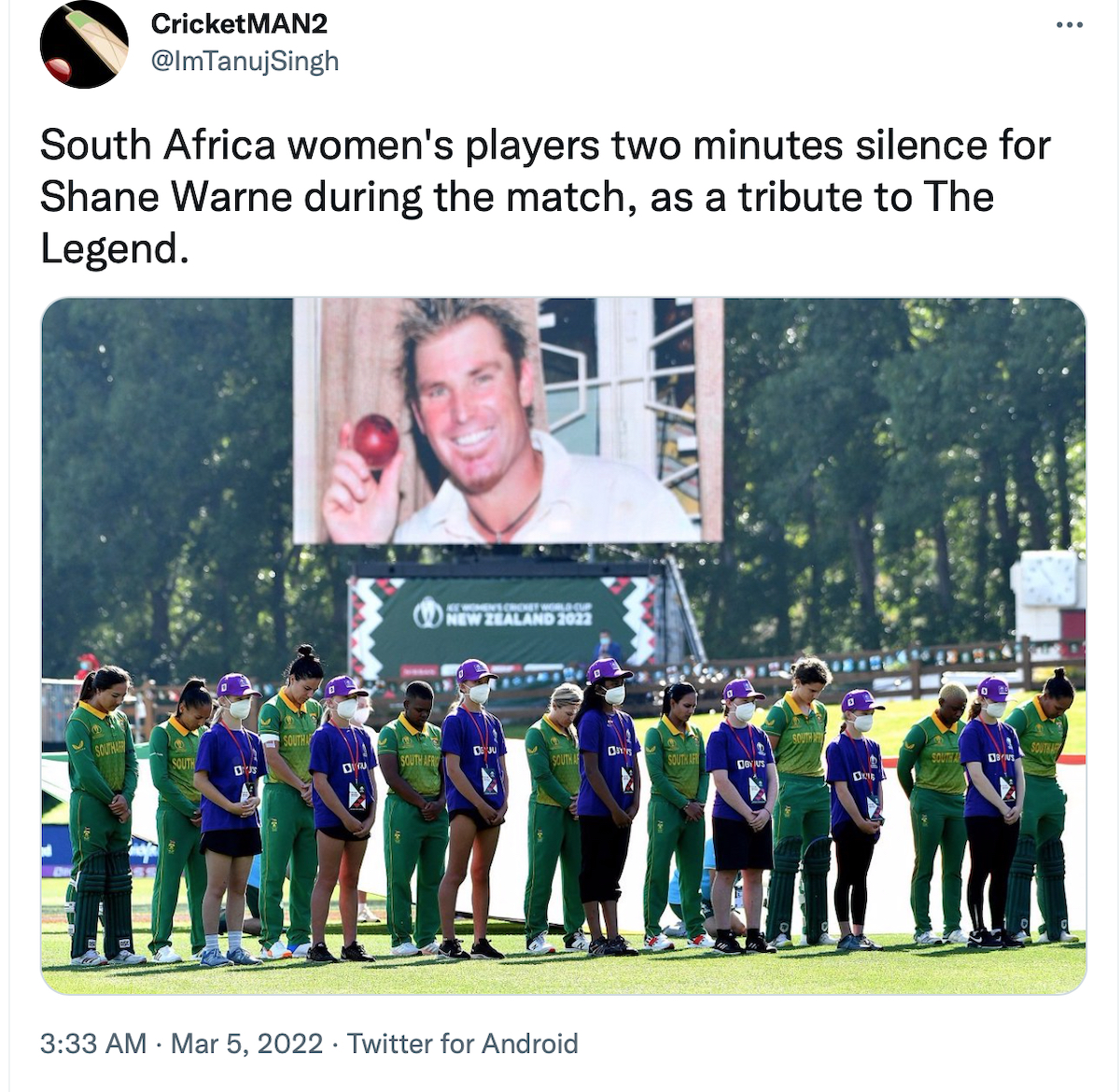 “Together with (West Indies legend) Brian Lara, they went on visits around the townships to spread the game of cricket. He was prepared to give advice and sign autographs to the youngsters. He inspired everyone to take up spin-bowling. He built a career we see today around the world after the impact he made since he bowled Mike Gatting with the ‘ball of the century’. His death has come as a shock to many of his followers. May his soul rest in peace.” 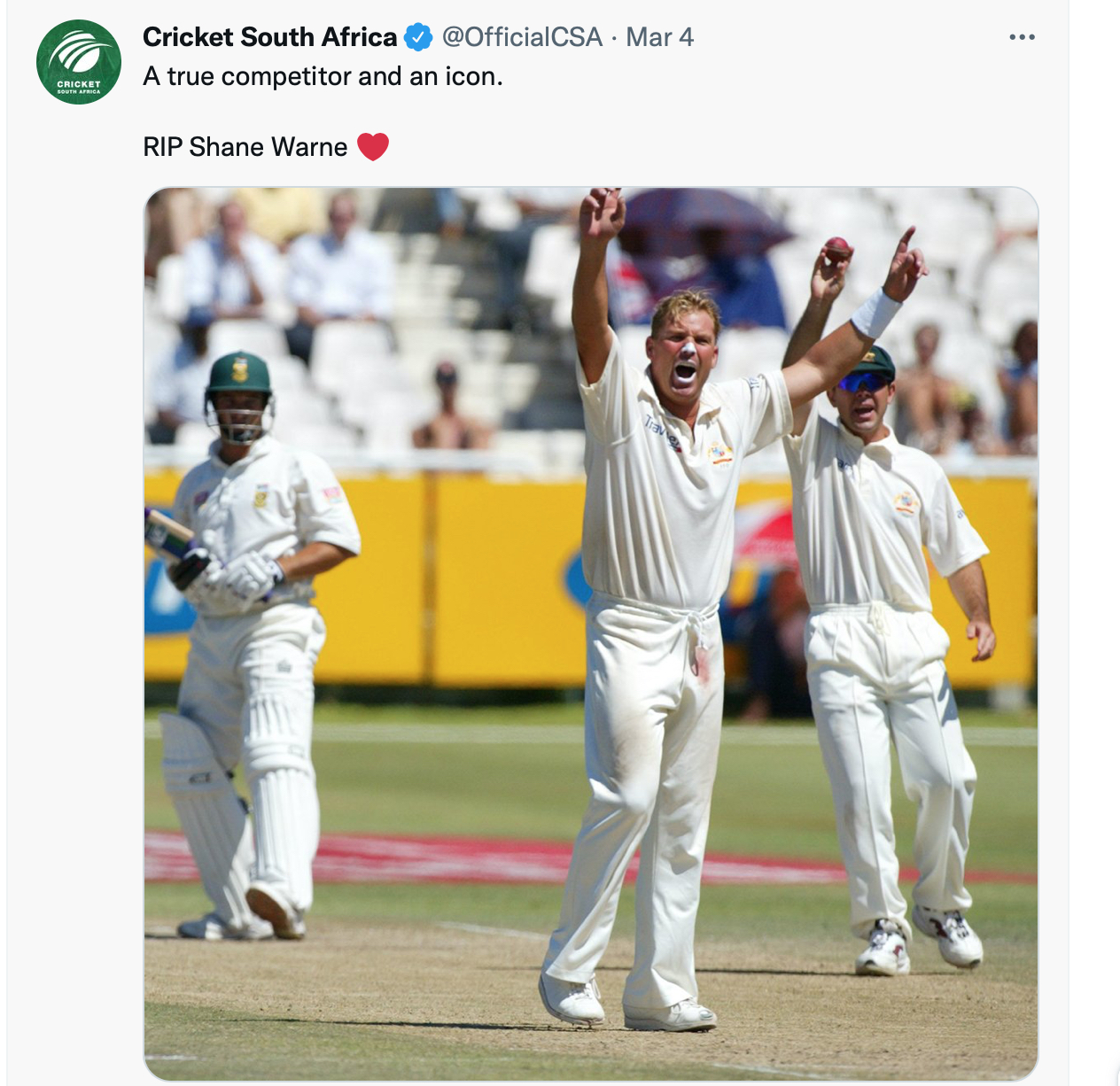