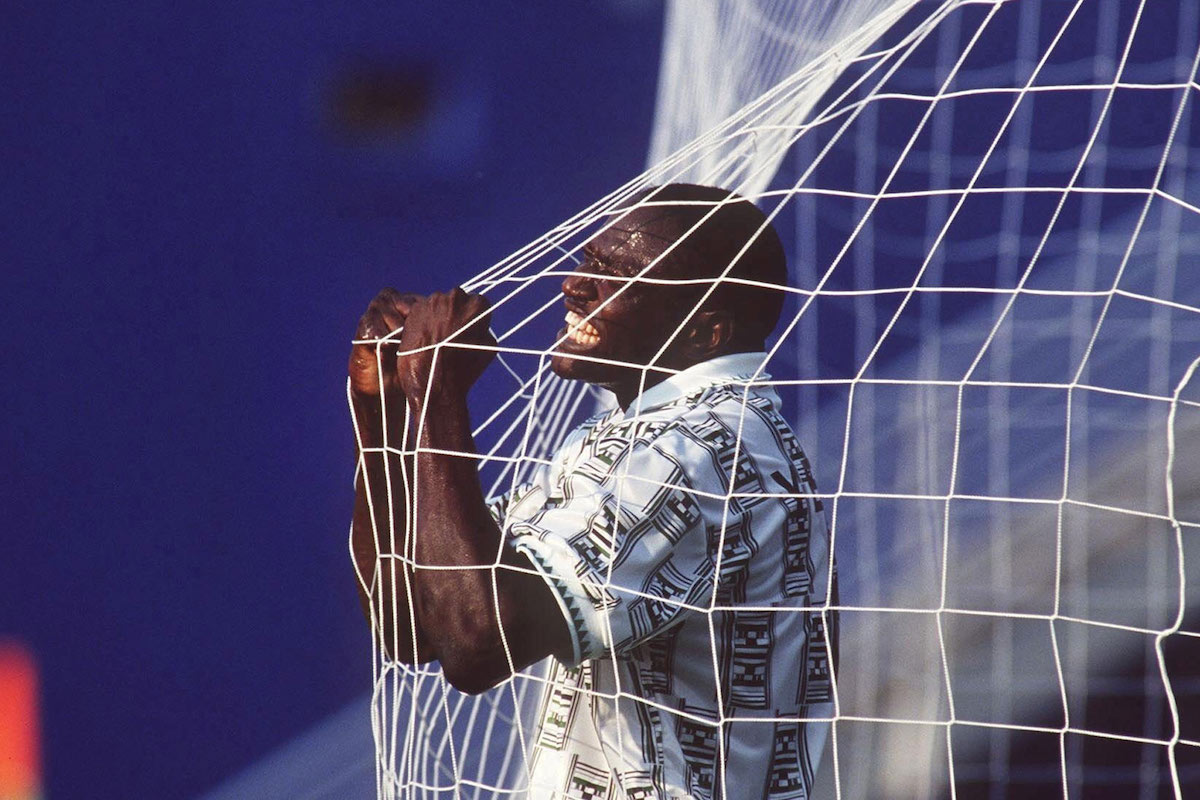 Early May marked the 10th anniversary of the death of Rashidi Yekini, a man regarded to this day as the gold standard for Nigerian strikers.

Over the course of an international career that spanned more than a decade, Yekini’s myth took on a larger-than-life quality, his 37 goals in under 60 international appearances setting a high bar for all who came after. “I am not saying that I will not try my best for the country, but it will be really difficult to match Yekini’s record,” former international Victor Agali said after making his debut in 2001, an indication of just how large a shadow Yekini had cast.

The man reverently nicknamed the Goalsfather top-scored at two of the four Africa Cup of Nations (Afcon) tournaments in which he played. He sits in third place for the most Afcon goals of all time, lifted the old African Unity Cup (Afcon trophy) in 1994 and played at two World Cups for the Super Eagles.

“He’s the best striker Nigeria ever had,” teammate and former Nigeria captain Sunday Oliseh said. “He was full of pace, had a superb shot, could jump very high and was calm in front of goal.”

While tributes and fond throwbacks were the order of the day on social media on 4 May, the anniversary of Yekini’s death came and went largely unremarked on by the top brass of Nigerian football.

This indifference follows a general theme as far as the 1993 African Footballer of the Year is concerned. Since Yekini died, there has been no appetite from the Nigeria Football Federation (NFF) to honour his person or legacy. There exists no memorial in his honour, and even the circumstances of his death have never been properly clarified. Instead, the country’s football complex has simply moved on, intent on consigning one of its greatest ever servants to the forgotten pile.

Born in Kaduna in northern Nigeria in 1963, little is known of Yekini’s adolescence beyond two things: he spent some time as an apprentice to an auto mechanic and he was passionate about scoring goals.

Having lost his father at a rather early age, Yekini – who got barely a primary school education – told New African Magazine about the hardships he had experienced as a youngster.

“I was sleeping in all kinds of places and had no idea about how I was going to survive. It was a very hard life and it made it hard to really put my trust in anyone. It is hard to trust your mother or your father even,” he said. It was a rare glimpse into the inner recesses of Yekini’s mind. And that was the way he liked it. Yekini was a private, introverted individual who was largely content to let his football do the talking.

So eloquent were his skills that the Kaduna-based fans of southwestern powerhouse Shooting Stars procured his services on behalf of the club and brought him down to Ibadan. There, at the age of 21, he began to write his name into national folklore, playing alongside legendary internationals such as Segun Odegbami, Muda Lawal and Felix Owolabi, all of whom were integral to Nigeria winning the 1980 Afcon on home soil.

“It only took Rashidi two training sessions to secure his place in the team,” Odegbami recalled in a column in Nigeria daily Complete Sports.

Prominence at international level followed as Shooting Stars boss Adegboye Onigbinde, tasked with building a new national team for the 1984 Afcon, naturally blooded his young charge. Over the course of the next decade, Yekini’s stock grew at home and abroad, and wherever he went – Abidjan, Setubal, Algiers, Dakar, Lagos, Tunis – goals followed and his quiet professionalism held true.

“He had an uncanny nose for being in the right place at the right time,” Odegbami said. “He took his football very seriously. He trained as hard as anyone else and did not indulge in frivolous activities. He hardly ever complained about anything.”

The upshot of this was deification at Vitoria Setubal (where he scored 105 goals and was nicknamed O Deus Negro, the Black god) and an extended reign as Nigeria’s undisputed first-choice centre forward. At the height of his powers, he finished as the top scorer in the Portuguese top flight and scored 13 goals in 12 matches to both qualify Nigeria for their first World Cup in 1994 and win the Afcon for a second time.

Considering the manner in which he conducted himself during his playing days, it wasn’t a surprise that Yekini eschewed the spotlight when he retired. “He always kept to himself, but came alive during training sessions and matches for his country,” former international teammate Victor Ikpeba said. “Somewhat withdrawn, but that was his nature.”

He turned down any suggestions of working in the football industry, preferring his own counsel at his country home in Ibadan. Nigerian society, however, has a deep distrust of reclusive behaviour and rumours began to swirl about Yekini’s state of mind. Diagnoses of bipolar disorder and depression became commonplace, exacerbated by his apparent detachment from family and friends. Some went so far as to say he had lost his sanity. Odegbami, however, refuted that claim.

“People have the impression that he was insane. Rashidi was sane, healthy, fit … There was absolutely nothing wrong with him. That is what we should remember him for, not for some concocted stories that people are bandying about.”

Not that this kept the rumour mill from grinding away. What followed has never been conclusively explained, but a few things can be ascertained. The first is that members of Yekini’s extended family staged what amounted to an intervention, spiriting him away from his home in Ibadan. The second is that it was announced shortly thereafter that he had died and been buried quickly, in accordance with Muslim tradition. The third is that, per the Oyo state police, there was never any investigation or inquiry launched into the circumstances of his death.

It is impossible to say for certain why or how one of Nigeria’s greatest footballers died at the relatively tender age of 48. Ten years on, questions linger. And unsurprisingly, there have been suggestions that something sinister happened. As far back as 2016, his eldest daughter Yemisi called for an official investigation, expressing incredulity at the persistent lack of clarity around his death.

“They took him away for three weeks and when they brought him back, they brought back his corpse. So what happened in the intervening period?” Odegbami asked. “Nobody is saying that he was killed, but whatever they did to him in an effort to cure him of an ailment he did not have must have killed him. That’s why we are saying that an investigation should be conducted, so that at least we know what the cause of his death was. Where did he die? Where did they take him? Who treated him for what?”

Ikpeba echoed these sentiments. “A lot of things could have been done to give closure to his family, fans and the country. It’s shocking because it’s 10 years and nobody knows how he died. So who do we blame? The police, his state government or the federal government? These are the questions I ask myself. Sadly, we failed him when he was alive and in death.”

There is a school of thought that insists players are owed nothing when they retire, given that they were paid handsomely for serving their country. Be that as it may, the fraternity has failed Yekini. He was a recluse by choice and didn’t want to be involved, but his standing should have meant this wasn’t allowed to slide, especially in light of potential mental health concerns.

“This is an African football legend, an icon and a mentor of so many people,” Odegbami said. “Somebody like that should not just die and nobody understands why he died, where he died or what killed him. I believe that in his grave, he must now be willing that something be done to unearth the true story of his death.”

Without efforts to clarify the circumstances of his death, his legacy may never be afforded the honour it deserves. To recognise him in any capacity would likely raise uncomfortable questions, the likes of which many continue to ruminate on to this day, although few are willing to address them.

What is certain though is that Yekini was committed to football, his faith and his country. “I always like to do my best for the country. When you see the flag flying, you are always very happy to do something for a nation,” he said in 2003.

“There was a time I learnt that my [club] coach was complaining in the press that I went too often to play for Nigeria and that it affected his plans. Do you know what I told him? I told him nobody, repeat nobody, can stop me from playing for my fatherland. This is where my people love me, not only because I score goals but because I am their son. Even if Nigeria has a fixture against ants and cockroaches and I am invited, I will go and play.”