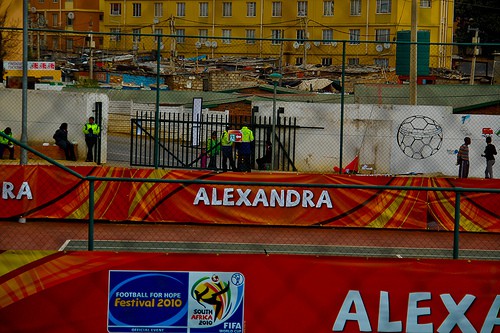 According to the South African History Online, Alex was first built in 1912 and at the time was the only place black people in South Africa could buy property.

Today, the township is home to over 179,700 people who live in mostly informal houses or shacks.  Alex was also home to some of Africa’s legendary leaders like former President Nelson Mandela, former Mozambican President Samora Machel and jazz musician Hugh Masekela.

While the rate of crime and unemployment remain high, the streets of Alex are vibrant and colourful. This illustrates the diversity of South Africa while showing its painful past.

Here are some photos from Alex:

A woman prepares porridge, a staple food in South Africa, during the opening of the Football for Hope Festival in Alexandra township in 2010. Photo: ANP/ Reuters/ Radu Sigheti

A mural of Nelson Mandela is seen outside his house in the Alexandra Township. Photo: ANP/EPA/ Kim Ludbrook

Translation and African languages are important, but we need to move beyond activism