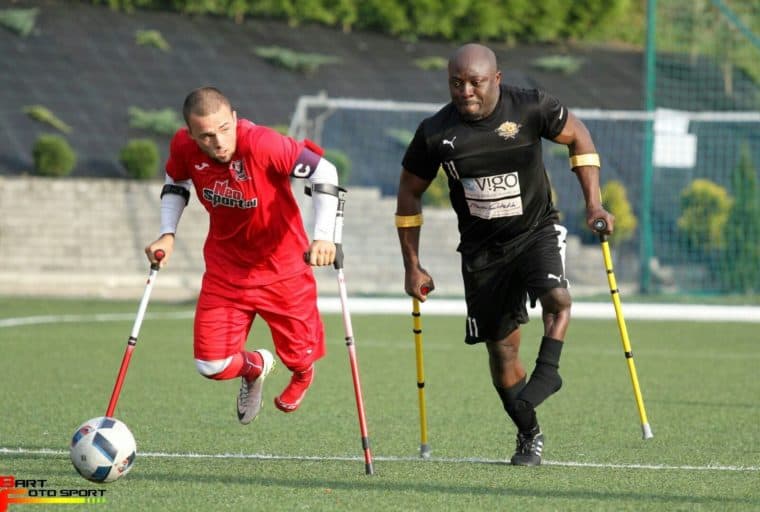 Bamgbopa Abayomi Alabi who is popularly known as Alabama, is a Poland based footballer and is Nigeria’s first amputee footballer in Europe. On his Facebook profile picture, you can see a heavily built man with crutches chasing after a ball.

Alabi’s love for sports started when he was young. An indigene of Ogun State, his best sport was powerlifting, a sport one of his uncles introduced him to. Born in Kano but grew up in Abeokuta, Alabi attended Idi-Agba Grammar School. It was while still in secondary school that he got involved in a car accident. He says he doesn’t like remembering that day.

It was in Abeokuta that he started participating in special sports after he lost his leg in the accident. Loosing his leg did not stop him from participating in sporting activities. In 2000, he represented Ogun State at the National Sports Festival that took place in Bauchi. He had not yet started playing amputee football by this time.

Before joining the amputee football team in Lagos, Alabi had already been playing football. He loved playing football and till today says it’s his best sport. True to the love of the sport, Alabi was in the Nigerian amputee team and represented Nigeria twice in the football African Cup of Nations.

The difference between amputee football and the everyday football isn’t much. The amputee football uses six players with two linesmen/women. There’s no referee inside the pitch. The goalkeeper only uses one hand and there’s no offside unlike the able bodied game. When the ball goes out for throwing, instead of using hands, it’s the legs that are used. While in able bodied football the field is 45m by 90m, the amputee football pitch is 40m by 60m.

When he finally started playing amputee football, he became part of the team that represented Nigeria in the amputee football Nations Cup held in Monrovia, Liberia from the 30th of March to the 6th of April in 2008. His second appearance for the team on the Nations Cup was in 2011, in Ghana from the 18th to the 27th of November. Alabi played a key role in Nigeria’s qualification to the amputee world cup that was held in Mexico in 2014. Nigeria was the only country that didn’t end up going due to lack of funds. Alabi whose disappointment was great said other African countries like Angola and Ghana participated in the World Cup. Nigeria ended up paying a fine.

When Alabi got to France, he played for an amputee club, but later left in the middle of the season when the European Amputee Football invited him to play in Poland. Between 2014 and 2016 he played for the Lampart Amputee Football Club. He left that club and is currently playing for Gloria Varsovia. Besides amputee football, Alabi also plays wheelchair basketball in Poland. Currently the best player in his team and the second best player in the league, he said racism is everywhere but in his team he’s not encountered any racism.

Alabi hopes to return to Nigeria to improve the quality of the game. Hopefully he will get the support he needs, both from the government and the society at large.

Is Anthony Joshua the next boxing icon?

Nigerian security guard Ogbanago rewarded with over $15,000 after returning $10,000