Who are the Queens of Swaziland?
Advertisement 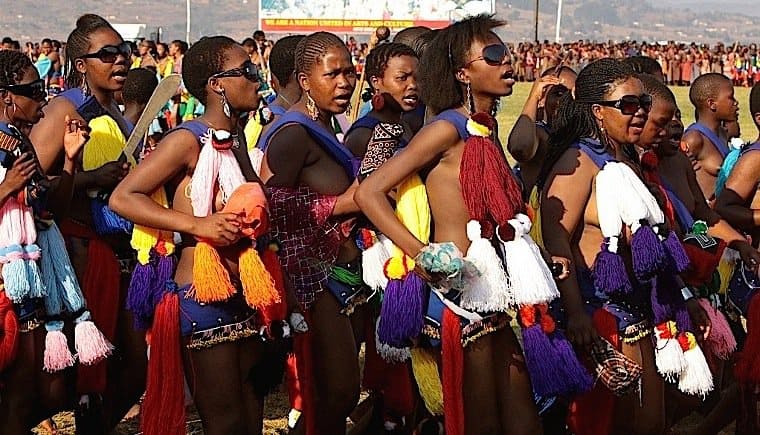 The King of Swaziland Mswati III, better known for his flamboyant excesses than for his hypothetical qualities as a leader, is, by definition, allergic to democracy. The 46-year old monarch has reigned over his small landlocked nation on the brink of economic disaster for 28 years: 40 per cent of Swazis are unemployed, the country has the highest HIV infection rate per capita in the world, and the life expectancy of 46 years is among the world’s lowest.

King of Swaziland Mswati III (left) and one of his 14 wives disembark from a plane after arriving at Katunayake International airport in Colombo, Sri Lanka, August 13, 2012. Photo: Reuters

But these statistics are truly heartbreaking when one considers that for the cost of the king’s expensive cars (fleets of top-of-the-range Mercedes and BMW cars, at least one Rolls Royce and a $500,000 Daimler Chrysler flagship Maybach 62) and private jet ($17 million) alone, the monarch could put every child in his country through school and throw in healthcare while he’s at it. To be fair, primary school education is free in Swaziland, although it remains a challenge keeping it so. But while the king recently upped his annual household budget to $61 million, 70 per cent of the king’s subjects must get by on an income of less than $2 a day.

With 13 palaces, riches beyond the wildest dreams of the average Swazi (the king disputes the $200-million frequently cited as his personal fortune), courtiers and a fascinating harem, no one can accuse the king of not knowing how to take care of No. 1. But let’s focus now on this harem.

The beloved king is very popular for hosting the traditional reed ceremony where he gets to pick a new wife every year. He now has 14, and while those who have no issue with polygamy in the age of gender equality can shrug that off, it’s harder to shrug off the cost of maintaining such a harem knowing how little the average Swazi has to make do with.

In marked contrast to Swaziland’s previous queens – who were expected to shy away from public life and live modestly – our modern Swazi dames like to live large from the public coffers. (Could be worse, I suppose. The king’s predecessor had 70 wives.)

Who are these women? Let’s find out.

Queen LaMatsebula fulfilled all the requirements of the national councilors who appointed the king’s first wife. Like the first wife of any Swazi king, the “Great Wife” is a member of the Matsebula clan. She must be of good character and come from a good family. She is the one to hold special functions in rituals. However, as tradition prohibits, her son can never claim kingship.

After earning her degree, the UNISA graduate said she’d studied psychology because as a queen having to work closely with a great number of people, she needed to acquire the knowledge necessary for keeping an open mind and understanding better the people she meets.

Queen LaMotsa, mother of four and second ritual wife (also selected for the king by the national board), is the Patron of St Annes Girls School in Malkerns, Swaziland. She is also an active public speaker and has been a United Nations Development Programme (UNDP) Goodwill Ambassador since 1996.

Queen Inkhosikati LaMbikiza, 3rd wife of King Mswati III and the first one to be personally chosen by the king himself, is the founder of the South-Africa based Lusito Charity Organization, whose aim is to provide financial assistance to the underprivileged. She is also the Director of the Swazi Royal Initiative to Combat AIDS (RICH).

With several social and professional accomplishments under her belt, this prominent and very articulate UNISA’s law graduate advocates for Christianity, health, AIDS prevention and treatment, poverty-reduction, maternal mortality reduction, and much more. Profoundly religious, she is the first Swazi queen to record a gospel album as well as the first one to continue her education after marrying the king.

Queen Inkhosikati LaMbikiza is the mother of the king’s eldest daughter, the popular singer/rapper princess Sikhanyiso Dlamini, who’s musical tribute Hail Your Majesty is to be endured here.

The princess also explicates the royal lifestyle in Without the King, a solid documentary about Swaziland’s troubling contrast between poverty and opulence.

Law graduate Queen LaNgangaza is the patron of Swaziland Hospice at Home (which was once headed by Princess Diana) and Fundzis’ Umtfwana, an organization that pushes education as a top-priority.

Through awareness campaigns, Queen LaNgangaza addresses her people about health, beauty, culture, education and the necessity of caring for others, including the elderly and the pariahs of society.

In 2012, she was one of the three wives embroiled in the scandal about a planned multi-million Rand shopping trip and holiday in Las Vegas, all of which the Swazi government denied.

Leaving her three children behind, Putsoana Hwala fled the royal life to South Africa in 2004, using her South African passport to escape possible detection by security agents. She is however, still married to the king.

Former patron of Safe Motherhood, art lover Delisa left the king in 2004 at the height of a sex scandal in which she was the principal actress.

She was accused of having an affair with a 23-year-old South African man, Lizo Shabangu. The relationship was allegedly terminated when the Sowetan expressed his desire to elope with Delisa. However, she fashioned an evasion plan of her own and is now reported to be living an abounding life after getting married to a South African business tycoon with whom she has a child.

When King Mswati III secretly chose his 7th bride, the Times of Swaziland ruffled the royal feathers when it referred to LaMasango as an irresponsible high-school dropout, noting that she’d been expelled for indiscipline and absenteeism from two different schools. The New York Times subsequently reported that Bheki Makhubu, the Sunday editor of the paper in question, was arrested, charged with defamation and forced to resign. Since then LaMasango has pursued her interest in painting, hosting auctions of her work to fund-raise for charity.

The Swaziland soap opera continues with LaGija, the king’s 8th wife and the third to leave the royal compound, which she vacated in May 2012.

LaGija fled to South Africa, leaving her daughter behind. The Swaziland Solidarity Network (SSN) stated that “She left citing many years of emotional and physical abuse by her husband as the reason for her departure”.

Allegedly one of the king’s favorites, LaMagongo was quite the athlete in high school. She is also well remembered for her exemplary discipline and her involvement in the Student Christian Fellowship (SCM).

In an interview with The Guardian in 2004, she acknowledged that HIV could enter the royal circle, but said she would stay because she trusted God and her husband. “I’m young, he’s old, I can’t raise my concerns. If I live in fear the trust won’t be there any more.”

Queen Mahlangu is famous for having been abducted by royal aides to become the king’s 10th wife.

According to an Amnesty International report (see page 30), the eighteen-year-old High School student Zena Mahlangu “disappeared from her school on 9 October 2002. After frantic inquiries her mother, Lindiwe Dlamini, learnt that her daughter had been taken by two men, Qethuka Sgombeni Dlamini and Tulujani Sikhondze, and was being held at the Royal Palace at Ludzidzini. On 10 October she reported the matter to the police, but she heard nothing further from them. On the following day the two men came to her home and told her that her daughter was at the Royal Palace and had been “assigned Royal duties”. They concluded: “The king and his agents have violated the internationally recognized human rights of women and girls, including their right not to be arbitrarily detained and the right not to be subjected to forced marriage.”

Her mother sued the royal court, but Swaziland’s legal system was not to deliver justice in this case. Quelle surprise.

In a poignant interview, the unhappy mother described her resignation: “By the time I realized Zena was not going to be released, I knew there was no point in asking her whether she loved him or not. It would not be fair. I think all the girls, when the king first selects them, cannot know how they feel. There is no choice here. If the king likes you, that’s it.”

Engaged in 2002, Inkhosikati LaNtentesa was married in a traditional function held at Ludzidzini Royal Residence in 2005. She is the patron of Cheshire Homes Swaziland, a rehabilitation center based in Matsapha and an affiliate of Leonard Cheshire International, which already has other disability centers in more than 50 countries worldwide.

Mswati III’s 12th wife Inkhosikati LaDube, was placed under house arrest (for life) at the home of the king’s mother in 2010 after an alleged affair with Swaziland’s justice minister Ndumiso Mamba, who was then fired and incarcerated. ‘The police raided the exclusive Royal Villas hotel just seven miles from the palace on the outskirts of the Swazi administrative capital Mbabane and discovered Mr. Mamba hiding under the queen’s double bed,’ reported the Daily Mail.

If the former Miss Teen Swaziland was only trying to get us to see that polygamous relationships only work when all parties have equal privileges, you’ve got to give her an A for effort! Unfortunately, LaDube was ordered to leave the royal household in November 2011.

Inkhosikati LaNkambule who beat a glamorous TV presenter and Miss Swaziland in the 10,000 women race to capture the king’s interest, was chosen at the reed dance ceremony when she was 17. Her nomination was in violation with the rules Mswati himself had instituted, prohibiting Swazi women from getting married before the age of 18, but I guess it’s one rule for the king and another for his subjects, because any other man who breaks the “umchwasho” rule is either fined an animal, such as a cow, or is liable for a fine of about $160.

It was as a bare-breasted teenager wrapped in traditional cloth accessorized with red feathers and a grand necklace that Simila was chosen to be Mswati III’s 14th wife.

A Miss Cultural Heritage finalist, the 18-year-old local beauty pageant participant Sindiswa Dlamini had only just graduated from the religious Mbabane’s St. Francis High School (the year before). The ceremony was held in central Swaziland and with the celebrations the king no doubt succeeded in distracting the electoral observers of the Southern African Development Community.

Such is the media censorship in Swaziland when it comes to reporting the king’s activities with respect to his wives that you are probably now better informed than the average king’s subject.

a) Warts on the face of a changing Africa where mothers and daughters are meant to be exemplary?
b) Respectable traditional females who simply carry out with elegance and intelligence their duty in a country where royalty is the pillar of national identity?
c) Masters of the art of directing the spotlight on ludicrous and farcical matters, so that shady business can proceed unnoticed in the shadows.
d) Gender equality activists for the Swazi women who were long denied opportunities to progress as entrepreneurs and first-class citizens?
e) Regular women who would rather live a different life but have no choice but to give in to their fate?
f) Happily married women who love their husband beyond the imagination of anyone else, including myself?

Are these women prosecutors, traditionalists, victims, role models or crimes witnesses? Perhaps even, voices for those who can’t speak?

Share with us what you think about the women behind The Man!

Meet some of them in this 7-year-old video.

Advertisement
Related Topics:Swaziland
Up Next

The misogyny behind witchcraft accusations