eSwatini killings: All the king’s men vs the people
Advertisement 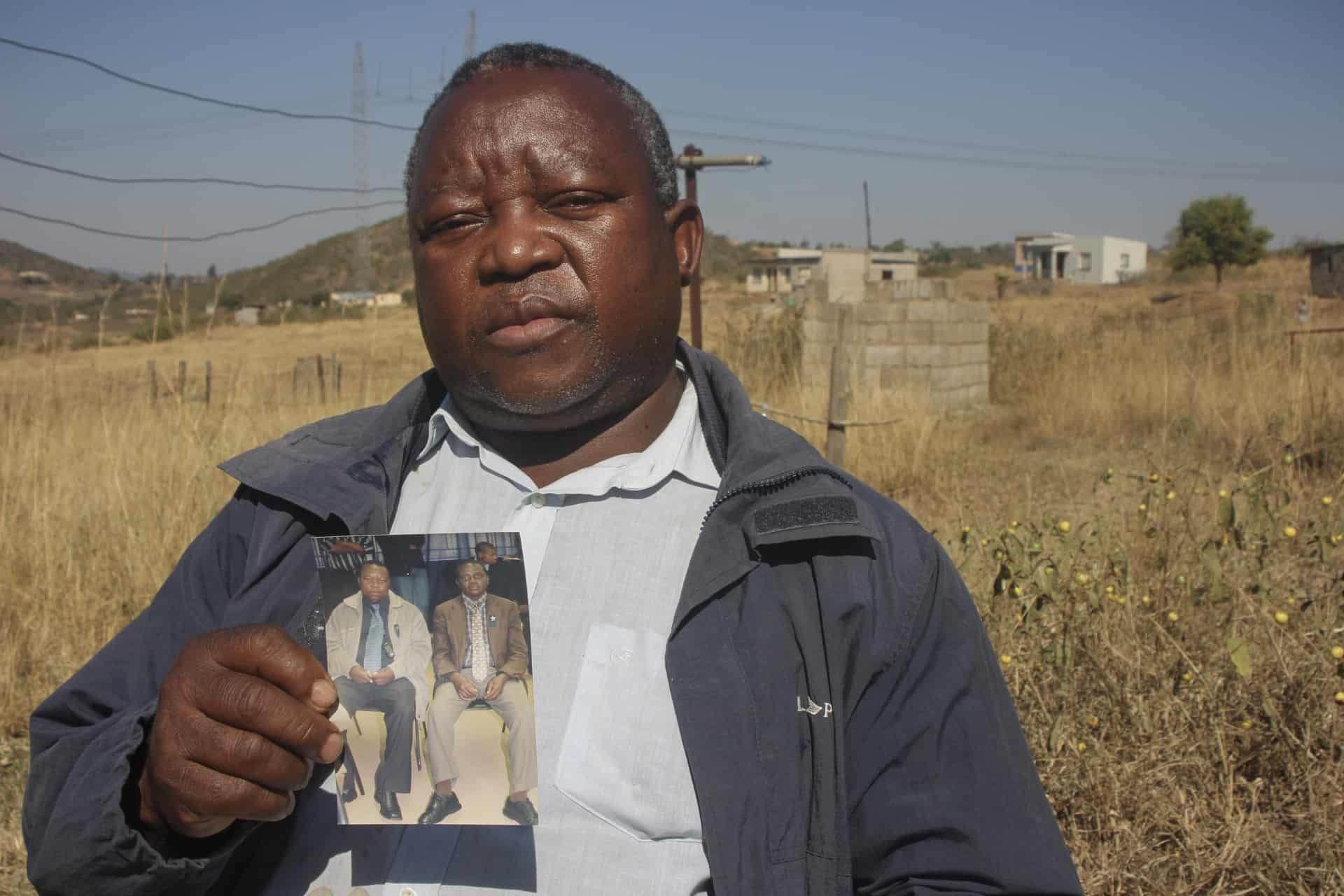 Vincent Vusumuzi Bhembe, 65, of Ngculwini in the Manzini region, was standing at the Philomena Primary School fence looking down at the damage to a shopping centre when a vehicle ferrying security officers came rushing past. Warning shots were fired, and then a shot at close range hit Bhembe in the back.

“The police officers did not utter any word, they just shot at the people. The shooting happened so fast that Bhembe was oblivious to what was taking place,” says Ray Ndzimandze, 47, who was at the shooting.

Residents at Ngculwini outside Manzini came in numbers to bury Vusumuzi Bhembe, 65, who was shot and killed by the armed forces.

The bullet exploded on impact, exiting through the stomach and destroying vital organs. After shooting at Bhembe, the security officers hastened back to their car and drove towards Manzini at full speed, says Ndzimandze, who went to check on Bhembe. Two boys had wrapped his shirt around the wound.

Bhembe looked up, locked eyes with Ndzimandze and said with gravity: “Ngilimele (I am injured).”

“Those were his last words,” says Ndzimandze.

Bhembe was rushed to the Raleigh Fitkin Memorial (RFM) Hospital in Manzini, after he had been bleeding for at least 30 minutes. He died the following day, on 1 July. “As a family, we are deeply saddened,” says his younger brother, Hlalu Bhembe, 61. “We tried to stop him but my brother, ever so curious, insisted that he wanted to see the damage at the shopping centre.”

Bhembe is one of many who have been murdered this way.

On 29 June, according to Mlungisi Makhanya, president of the banned People’s United Democratic Movement (Pudemo), nine people brought to the Mbabane Government Hospital with gunshot wounds died, 40 who had sustained gunshot injuries were treated and discharged, and 16 were admitted with serious injuries.

The same day, at the RFM Hospital, 16 people brought in with gunshot wounds were reported dead, 66 more were treated, and nine of these, having sustained serious injuries, had to be admitted.

The next day, eight people brought in to the Mbabane Government Hospital with gunshot wounds died, 47 were treated and discharged, 25 were admitted with severe injuries, and nine of these were waiting to go to theatre on 1 July. Two more with head injuries were in the intensive care unit.

A section of eSwatini’s largest beverage company in Matsapa was burnt into ashes. Residents say armed forces killed and burnt the remains of those they shot in the fire – and now soldiers guard the site.

According to a senior staff member at the hospital, four people brought in alive died between 29 June and 2 July, two who could not breathe on their own were in intensive care, and one in the male surgical ward with severe head injuries had a “fifty-fifty” chance of surviving.

Two had amputations performed. “It’s either they’re amputated or the whole body rots,” says the senior staff member. Also, there were two people who suffered severe burns, 13 who had multiple fractures and two who are now paraplegics after bullets lodged in their spines.

As a result of the increasing number of casualties, some staff members have had to work two consecutive shifts at a time.

The Mbabane Government Hospital in the country’s capital where a dozen of people shot by the eSwatini’s armed forces are receiving treatment.

At RFM Hospital, 11 people brought in with gunshot wounds died, 78 were seen and discharged, and 18 more with severe injuries were admitted. Some of the people who died at the hospital, according to Makhanya, include Thando Mvubu, an adult man whose skull was destroyed by a gunshot; a 36-year-old woman from Logoba, Nonhle Matsebula, who was also shot in the head; and Mbongiseni Gamedze, who was shot on the left side of the face.

Then there was Manqoba Matsenjwa; Simile Sangweni, a woman from Matsapha; and one man recorded as unknown, brought in by police who claimed he was discovered on the roadside. “But upon observation there was nothing that suggests that he had been knocked by a car… He had gun wounds,” Makhanya says.

These are numbers from the two major hospitals only. They exclude other small towns such as Siteki, Nhlangano, Piggs Peak and Mankayane – where, on 30 June alone, two died from gunshot wounds and 15 were treated and discharged.

Activists and citizens say the government stopped the delivery of petitions calling for democratic reforms, particularly for the election of a prime minister not appointed by the king.

In an interview with Audrey Brown of the BBC’s Focus on Africa, Sikhanyiso Dlamini, the king’s daughter and minister of information and technology, said the delivery of petitions was stopped because of a looming third wave of Covid-19 and that a virtual submission process was introduced instead. This version contradicts acting Prime Minister Themba Nhlanganiso Masuku’s 24 June statement, which banned petitions on the grounds that “it had become apparent that this exercise has created a breeding ground for anarchy and has been intentionally hijacked to sow seeds of division”.

In the same BBC interview, Dlamini said: “There is under no circumstances that the rights of our people would be infringed upon to prevent peaceful petitions and a peaceful presentation of their cries and pleas. What is happening on the ground [is that] there is a youth that’s growing up and they have general needs of unemployment, of service delivery and an overall improved quality of life for the people of eSwatini.

Madzabudzabu Kunene, 44, a former leader of Pudemo’s military wing Swaziland Youth Congress, has had his leg amputated after he was shot by eSwatini’s armed forces during the protests.

“And this was going all good and well when the petitions were being delivered at the various constituency centres. And what ended up happening is that there was a certain group that was appearing at every petition delivery … creating anarchy and … threatening the MPs that, if these demands do not come to pass, that they’d return and be violent and aggressive towards them.”

She did not name the “certain group”.

Motjane constituency member of parliament Robert Magongo says the government’s decision to ban the delivery of petitions on 24 June was “uncalled for”. He says he was never threatened by the young people in his constituency and was “more than ready” to receive their complaints.

When he drove past Ngubonkhulu Supermarket in Nduma on 26 June, however, he found a crowd of police officers in combat gear dispersing the young people who had come to hand over a petition. He was on the other side of the MR3 highway when the police officers assaulted and arrested a sickly Sithembiso “Reggie” Dlamini for wearing a Pudemo T-shirt.

Kunene Veli Dlamini is from Siphocosini. He got injured on 29 June at Ezulwini where he works as a bricklayer and fractured his knee while escaping security forces’ live bullets.

In Siphofaneni, the constituency’s member of parliament, Mduduzi “Magawugawu” Simelane, a vocal advocate of democratic reforms since joining parliament in 2018, says at no point was he threatened and that he was ready to receive young people’s demands.

The Sunday 4 July edition of the Times of Eswatini reported that Simelane “was currently in a secret hiding place on the [border] of eSwatini and South Africa after getting information that his life was in danger”.

Thulani Maseko, his lawyer, confirmed on 29 June that his clients – Simelane and another pro-democracy member of parliament, Bacede Mabuza – were in danger of being arrested.

When asked to at least acknowledge that the regime’s security forces had killed people, Dlamini said: “I am saying that foreign mercenaries have invaded the kingdom, hired by these people [those who are calling for democratic reforms] with these agendas …  [They are] carrying out the most heinous of attacks and they set up roadblocks and they’re dressed in police uniforms and army uniforms, infiltrating the citizens and sending videos of themselves attacking innocent citizens. The order of shoot to kill did not come from the king, if there is any such order.”

But it was an eSwatini security officer whom bystanders saw shoot and kill Msimisi “S’dzwiri” Mkhwanazi, 24, at close range at a roadblock that he and others had set up at Ngwenya as part of the continuing protests.

A Kwaluseni resident Tiberius Mkhwanazi, 33, was shot by soldiers at the Mahhala traffic circle in Matsapha.

A 32-year-old friend of Mkhwanazi’s, who was at the scene, says security forces got out of two cars from Oshoek and fired warning shots. One of the officers then aimed at Mkhwanazi and shot him in the head.

“After shooting him, they left him lying there like a dog,” says the friend.

Another Kwaluseni resident, Tiberius Mkhwanazi, 33, says soldiers shot him in the foot at the Mahhala traffic circle in Matsapha. He recognised a soldier he knew.

Now lying in one of the wards in the Mbabane Government Hospital is Madzabudzabu Kunene, 44, a former leader of Pudemo’s military wing, the Swaziland Youth Congress. The regime considers this organisation a terrorist movement.

He helped organise the protests at Extension 3, an area opposite the Mbabane Industrial Site, near Msunduza. Kunene played an essential role in the rollout of antiretroviral medication in the country in 2003. He alleges that security officers tapped into his device’s location, identified him in a crowd of protesters and then shot him in the leg.

The leg has since been amputated.

“I grew up in the struggle for freedom. The only thing I don’t have is a leg. I can still continue to push. In fact, this has revived me to fight even more,” says Kunene. “I am not a victim but a survivor … This is the beginning of the struggle. Now we need to get to the drawing board and the country must be ungovernable.”

Residents in Mahwalala outside the country’s capital in Mbabane have graffiti on the walls expressing disdain at the monarch.

In the bed next to Kunene is Veli Dlamini. Though he is from Siphocosini, he lives in Ezulwini where he works as a bricklayer. He ran into a road guardrail and fractured his knee on 29 June while escaping live bullets from security forces. “I saw the leg dangle, my brother. And the blood was gushing out,” he says. With a cast covering a big part of his right leg, he is now on the mend and hopes to walk again soon.

He says he will continue fighting and that he wishes he had a gun. He is not the only one to mention weapons.

In Ngwenya, for example, one resident who saw Msimisi Mkhwanazi mere moments after eSwatini security forces had killed him, says the country is now involved in a civil war, and only the king’s side has guns. This is a sentiment many share. The resident adds that it would be better if ordinary people had guns too. “We can … die fighting, so we can at least die with dignity,” he says.

This article was first published by New Frame under a Creative Commons license. Read the original article.

A woman with HIV took over 200 days to clear her Covid infection. Here’s why researchers are worried