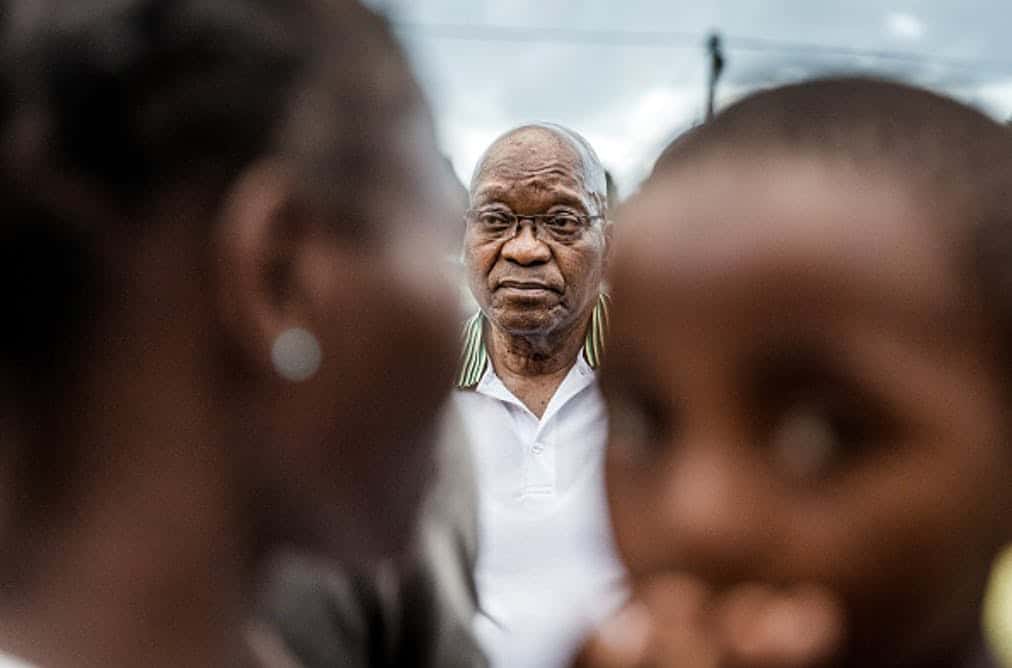 It’s the small crimes that bring you down. Al Capone went merrily on his murdering way until the FBI nailed him for tax evasion. Richard Nixon seemed immune to the consequences of lying about Vietnam, Cambodia and Chile but his lies over the silly crime of burgling the Democratic Party’s headquarters did for him.

So it is with Jacob Zuma South Africa’s former president. He faced multiple charges of corruption, but, so far, has avoided his day in court. He was tried for rape and acquitted. As president he was accused of working with an Indian family, the Guptas, in orchestrating “state capture” (seizing control of state organs for corrupt purposes). He is refusing to cooperate with the judicial commission investigating the allegations.

In the end it is his contempt of the Constitutional Court’s order that he cooperate with the commission that may send him to jail for 15 months. He’s appealed for a rescission of the order.

A question that invariably gets asked is whether power changed him. The country’s former foreign intelligence chief Moe Shaik seemed to think so, writing glowingly of the capable “struggle” version of Zuma, suggesting it was only as president that things went awry, although he noted that we will never know when “precisely Jacob Zuma lost his way”.

Perhaps it came rather earlier than Shaik thinks. As with so many fallen revolutionaries, the seeds of venality seem to have been sown in his younger days. It’s just that political power provided the nutrients for spectacular sprouting.

A taste of Zuma

My first taste of Zuma came in 1989. The ANC’s Operation Vula was under way. It involved building an underground insurrectionary network and I belonged to one of its regional leadership structures. We received an instruction to investigate whether Peter Mokaba, the leader of the African National Congress Youth League (ANCYL), was a spy.

Our damning report was presented to Zuma and the ANC’s security chief Joe Nhlanhla who informed us that Mokaba, who died in 2002, was an informer whose relationship with the security police went deeper than we’d suspected. Other ANC leaders got on board to spread this message but we were told that Oliver Tambo, who then led the exiled ANC, decided it would be better to rehabilitate Mokaba, which duly happened.

Soon after that I was visited by a senior leader of the South African Communist Party, which was in an alliance with the ANC. He pleaded with me to do a journalistic hatchet job on Zuma. He said his own home in Lusaka, the capital of Zambia, was bugged by ANC intelligence and that Zuma was corrupt.

I ignored the request. But it was one of several signs I’d seen that Zuma was despised within the Communist Party.

Zuma had briefly been on the party’s politburo but fell from favour partly because of conflicts between ANC intelligence and its armed wing Umkhonto we Sizwe. One conflict involved commander Thami Zulu, who was branded by Zuma’s allies as an enemy agent, detained for 14 months by the ANC in Lusaka and died of poisoning a week after his release. Those who knew Zulu insisted he was innocent.

His death contributed to the hatred for Zuma. It was by no means the only crime attributed to ANC intelligence.

Zuma started life in Nkandla, KwaZulu-Natal, in 1942, the son of a policeman and a domestic worker. He received scant formal education but emerged as a lad with a sharp mind and steely resolve. At 17 he joined the ANC and three years on was arrested as part of a group of military recruits, leading to a 10-year spell on Robben Island. He went into exile in 1975.

His ambition, prodigious memory and avuncular personality all helped him along and he became the ANC’s chief representative in Mozambique, a member of its political and military committee and its intelligence chief in 1987. Those who backed him tended to overlook his darker side, including his sexual promiscuity.

When Zuma returned to South Africa in 1990 KwaZulu-Natal was in the midst of a territorial war between the ANC and Chief Mangosuthu Buthelezi’s Zulu nationalist Inkatha movement. He emerged as ANC leader there after seeing off the ANC warlord Harry Gwala, using his charm and Zulu credentials to secure the peace. But this came at a cost. The ANC drew some of Inkatha’s most notorious killers into its fold and a new form of violence broke out.

This time it had nothing to do with ideology. Instead, it was all about money – as so much was when Zuma was around.

In 2004, when Zuma was deputy president, his financial advisor Schabir Shaik was arrested for his role in an arms deal and sentenced to 15 years’ imprisonment (but released after 28 months on spurious health grounds). He was found to have solicited bribes of R500,000 a year for Zuma, who was later charged with corruption. This was followed by further charges relating to another arms deal. But procedural irregularities and allegations of political interference meant none of these went to trial.

He faced legal jeopardy from a different source in 2006, tried for allegedly raping a 31-year-old Aids activist whom he knew to be HIV-positive (he said he believed a shower after sex would be adequate protection). Zuma claimed it was his duty as a Zulu man to have sex with a woman if she wore a short kanga (African wrap), and that he could not leave her “unfulfilled”.

He argued Zulu men have sexual primacy over women and he could therefore not be guilty.

To deny her sex, that would have been tantamount to rape.

Zuma was acquitted while the alleged victim was vilified, with Zuma and his supporters singing his favourite song, Lethu Mshini Wami (Bring me my machine gun) during and after the trial. The woman, later named as Fezekile Ntsukela Kuzwayo, fled into exile for safety. She returned after a decade and died in 2016.

Thabo Mbeki had dumped Zuma as his deputy in 2005 and the long-time allies became enemies. The paranoid Mbeki lacked the common touch and was oddly devoid of his former gracious charm, while Zuma was the opposite: friendly and humorous. By playing on popular concerns about service provision, crime, and Aids, and being chummy with the unions, the youth and the left, he won the backing of people who should have been more wary.

Zuma defeated Mbeki for the ANC leadership in 2007 and became president in 2009, remaining in office for nine years. The left hoped he’d curb his excesses, but the opposite happened. The Guptas fed his greed in return for state contracts, to the point that they offered cabinet positions to obedient hopefuls.

Eventually, Zuma over-reached. He dipped into state coffers to upgrade his house in Nkandla. Then he fired two finance ministers who would not do his bidding.

Cyril Ramaphosa won the ANC leadership race in December 2017. Two months later Zuma stepped down as president of the country. The Guptas promptly fled to Dubai.

Zuma faces jail for contempt, the revival of the original fraud, racketeering and money laundering charges, and possibly further charges, depending on the findings of the Zondo Commission into state capture, whose subpoenas he ignored.

There will be more posturing and more singing of Lethu Mshini Wami by followers who stand to lose from his demise. But at the age of 78 Zuma’s long day in the sun is over.

Related Topics:CorruptionGovernanceLeadershipSouth Africa
Up Next

eSwatini killings: All the king’s men vs the people

Turning a blind eye to eSwatini