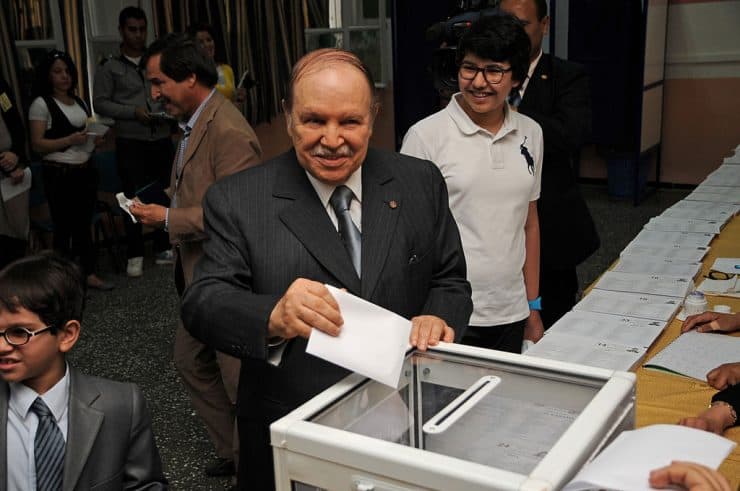 Following weeks of protest against him, President Abdelaziz Bouteflika of Algeria finally relented and resigned. He is the fifth and longest-serving head of state the North African country has had since independence, with four terms under his belt. Although he is credited with ending a bloody civil war that claimed the lives of about 200 000 Algerians throughout the 1990s, multitudes of Algerians took part in nationwide demonstrations, demanding that he step down and give democracy a chance.

Like so many African leaders, Bouteflika changed the constitution in 2008 to allow him to run for the third of his four terms in office. In 2012, he finally seemed ready to step down when he said in a speech at the time, “My generation is finished. Our time is over.” This turned out to be a false submission, however, as he went on to stand again and win the presidency in 2014.

This time, though, his resignation is final and Algeria already has Abdelkader Bensalah, the Speaker of parliament’s upper house, at the helm. Bouteflika’s resignation was not voluntary but the result of continuous protests against him after he announced his intention to run for a fifth term.

Furthermore, more than 1 000 judges issued a statement declaring that they would not supervise the April 2019 presidential election if Bouteflika were to run, and the military indicated that it would stand with the protesters, according to Britannica.

In his resignation letter Bouteflika wrote, “My intention … is to contribute to calming down the souls and minds of the citizens so that they can collectively take Algeria to the better future they aspire to.”

Bensalah is not the people’s choice and protests have continued under the slogan “Bensalah, go!” and “Resign, Bensalah!” Whether due to the pressure or for the sake of due procedure he has pledged to organise free elections within 90 days.

“We – citizens, the political class and state institutions – must work to ensure the conditions, all conditions, are right for a transparent and regular presidential poll,” he said during a televised address.

What Bouteflika did wrong

Bouteflika is criticised for taking the restoration of civilian rule over the military too far. As part of government reforms, the Department of Intelligence and Security, largely viewed as a state within a state, was gradually side-lined and then scrapped. It was replaced with a new agency directly under the control of the presidency, reports Britannica.

Hacen Ouali, a journalist at the independent El Watan newspaper, told Aljazeera, “Bouteflika has focused on concentrating all powers in the hands of the president. He spent his time trying to weaken the army and state institutions, various ministries and the national assembly.”

“He has a strong penchant for monarchic modes of governance. The proof is that he’s been in power for 20 years and wants to run again to institute ‘deeper reforms’.”

In terms of the economy, Bouteflika has fallen short of the expectations of his people, who have accused his family and close entourage of benefitting the most from state-building initiatives. These initiatives include the construction of new roads, the completion of a lagging metro project and the construction of Africa’s biggest mosque. All these projects were made possible by high oil prices between 2004 and 2014, which, despite the government’s failure to deliver, afforded it enough leeway to invest enormously in the country’s infrastructure.

“Under Bouteflika’s leadership, Algeria wasted an historic chance to develop in all areas of life – politically, economically and socially,” Ouali added.

All these years of corruption and mismanagement have left the oil and gas-rich country with a large deficit and an unemployment rate of about 12%.

What next for Algeria?

Bouteflika’s exit will not end the protests, which have expanded to many of Algeria’s major cities. Protestors are calling for full-blown regime change and an end to rule by ‘Le Pouvoir’ (the power), who form the backbone of the country’s ruling elite.

Dalia Ghanem, political analyst at the Carnegie Middle East Centre in Beirut, told Aljazeera, “Algerians want a radical change. By that they mean they want the departure of all these people who have been supporting Bouteflika.”

Opinions thus far differ on how the transition will occur. In a column published on the website TSA Algeria, Abed Charef, a political analyst, stated that strictly abiding by the Constitution might allow the cluster of ruling party officials, bureaucrats and tycoons that profited from preferential access to lucrative state contracts to organise and work out a succession plan.

“A presidential election organised at the end of the [transition] could allow the system to fix the question of power but constitutes a dangerous option for the country,” he wrote. “Because putting in place a succession plan with the current mechanism and with the same actors could result in the renewal of a reinvigorated system, free of its most negative symbols.”

Everyone is anxious to see which way the military, which is Algeria’s most powerful and best-organised institution, will concede. Given that they helped force Bouteflika out, will they also violate the constitution and step in again to rid the government of Bouteflika loyalists?

Events are still unfolding but other countries may benefit from the lessons of Algeria’s longest serving president being unseated by the will of the people.

How Sudan’s protesters upped the ante, and forced al-Bashir from power

Is Africa ready for an uprising that will move her forward?