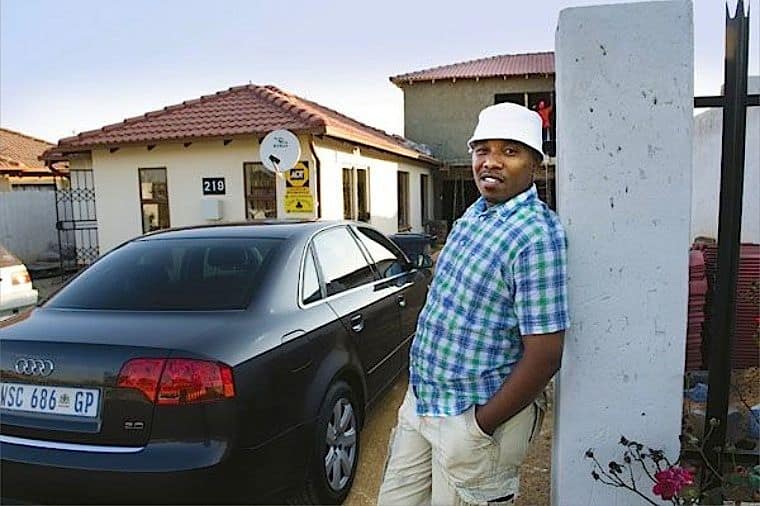 Not so very long ago, as recent as 1977, the exponents of Black Consciousness (BC) taught us that there were two nations in South Africa: one European, oppressive and privileged; the other African, oppressed and dispossessed.

The minority Europeans were aware that they were outnumbered by the natives. So they went out of their way to re-create an African middle class that would serve as a ‘buffer zone’ between the European Haves and the African Have-Nots.

The BC exponents told us that the African middle class was fake with neither land ownership nor control of the means of productions. They were recreated in the European image to serve as puppets in Bantustans and in top government and corporate positions to do as their masters told them.

Creating the ‘buffer zone’
Growing up in the townships – with the liberation movement in exile and Nelson Mandela in prison – we thought we knew the truth. The battle lines had been drawn: the European Have-Everything stood on one side and the African Have-Nothing on the other. In the middle was the small but growing new middle class that turned its back on their communities to seek love, acceptance and comfort in the enemy camp.

To create the middle class, the European Haves got into schools where they were helped by African principals, teachers and priests to identity and select those who had potential, mostly prefects and other servile types who would serve the interests of the system. Many of these were given scholarships and bursaries to top universities to become the ‘first black’ this or that.

These were role models, and examples that despite oppression and exploitation, Africans had no business blaming colonialism or apartheid for their failures. Many of them went on to become celebrities and super-achievers who were featured in special glossy magazines like Bona, Pace and Tribute.

By the time the liberation movements were unbanned, exiles returned and political prisoners released in 1990, the African middle was well cemented and had distanced itself from the struggle. Participation and leadership of the struggle was left to ‘com-tsotsis’ – angry bitter young males who had nothing to lose – and a few other individuals in the churches and trade unions.

Ms. Nkangane and her brother shopped at Soweto’s Maponya Mall in Johannesburg

The middle class
Instead, the African middle class stealthily creept into a bourgeois lifestyle where they enjoyed the same privileges as the Europeans Have-Everything. They spoke of the winds of change that were taking place following the scrapping of the social apartheid laws in the mid-1980s that allowed blacks and whites to sleep in the same hotels, have sex, live in the same neighbourhoods and speak the same language.

Some of the lucky went on to become cabinet ministers, directors-general and other top ranking officials in the post-1994 government. They were also rising into Managing Director and CEO positions in the corporate world. Indeed, they were very fluent and articulate in English and gave birth to children who would grow up not speaking any indigenous African languages.

Over the last 20 years, the African middle class has become a fact of life and has radically changed the notion of African identity, lifestyle and achievement. The values they hold – selfishness, materialism, hard work and determination, for instance – are human and universal and cannot be classified as belonging to any particular race or class. But they have not hesitated to distance themselves from the African Have-Nothing, and see themselves as the leadership that knows what is best for the majority. They have taken to what is misperceived to be the European culture and way of life and just part of globalisation.

By and large, the ‘buffer zone’ has solidified to become part of the socio-economic scene. Everybody is striving to have a house in the suburbs, two cars in the garage, children in private schools and, above all, English as the medium of communication.

The BC adherents from the 1960s and 1970s have vanished from the cultural and political scene to become part of the chattering classes themselves. In fact, the lines that divided the European Haves from the African Have-Nots have blurred and everyone is now just an African. There are neither blacks nor whites but simply South African citizens that are equal, even though some may be more equal in some ways.

We listened to BC exponents when we were young and thought that they were men and women who knew what they were talking about, especially when it came to envisaging the future African majority rule society. Some of our consciences lie uneasy at night now for we do not know what is Truth. There are far too many contradictions in what was taught and what we see practiced and lived. So, we find ourselves swinging like a pendulum.

Some are more equal than others
It will not get you anywhere to talk about black and white or the European Haves and the African Have-Nothing. It is all integration, now, in one big African melting pot of non-racial brotherhood and equality.

The Have-Nothings. In February 2014, the South African job market lost another 118,397 jobs. At 24%, South Africa has one of the world’s highest rates of unemployment. Photo: Thousands of hopeful job applicants queue for 200 positions advertised by the Metro Police Department in Durban, September 9, 2009. REUTERS/Rogan Ward

If any man or woman were to tell us to stop thinking like African Have-Nots in Africa, asking us to become part of the globalisation, it would be in line with what was started after 1976 or even before. There is no question that we now live in the 21st Century where as much as the unjust economic system depends on over-exploitation of the African Have-Nots, skin colour does not matter anymore, as it is the same difference. Exploiters come in all shades.

This is the new world where every man lives for himself and Africa is for us all. As for those who continue to point out the world of the European Haves and African Have-Nots, perhaps we need not worry ourselves too much about them for they, too, use those politics to create economic opportunities for themselves.

In short, it is a bad idea to look at the world in terms of black and white or European and African. We are now all in this together. It is either we live as globalised brothers and sisters or just destroy the Africa that threatens to take us back to the Middle Ages.