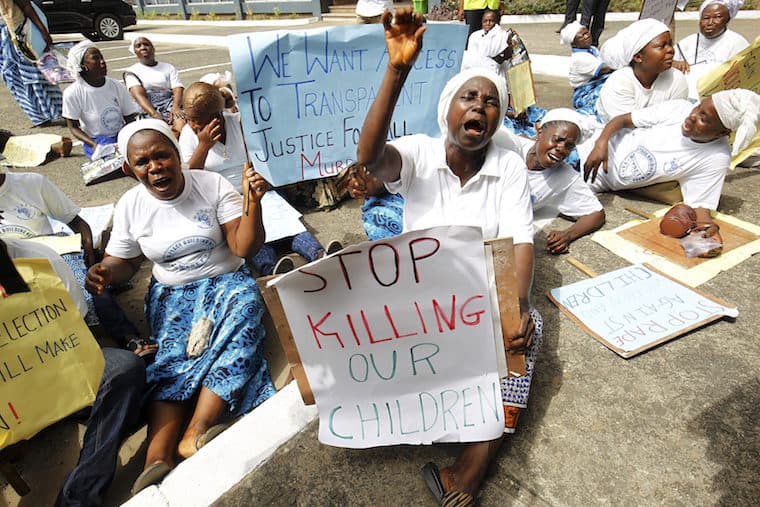 Recently women in South Africa protested to push for decisive action from the private sector and the government towards the arrest and harsh prosecution of sexual assault and femicide perpetrators in the country. Among those who have been recently slain and assaulted include University of Cape Town (UCT) student Uyinene Mrwetyana, University of Western Cape (UWC) student Jesse Hess, boxing champion Leighandre Jegels, 14-year-old Janika Mallo, Lynette Volschenk, and Meghan Cremer.

The multitudes of mostly young women dressed in black or their school uniform made their presence felt at both the headquarters of the Johannesburg Stock Exchange (JSE) in Johannesburg and the World Economic Forum (WEF) in Cape Town.

At the JSE protestors demanded that South Africa’s corporate sector provides funding and detailed plans to assist with combatting gender-based violence, carrying placards that read “I don’t want to die with my legs open” and “Actions not words,”  Reuters reported.

Nicky Newton-King, JSE’s CEO, told reporters as she accepted a memorandum of demands, “The pain the women in this country are feeling is palpable. I completely understand the need to be heard. The important point of this though is to how we mobilize the correct business response to what is a complete tragedy for this country. We have committed to take this to big business and devise how to respond appropriately”.

At the WEF protestors rejected a message from President Cyril Rampahosa’s special adviser on social policies including gender-based violence.

According to a global database on the murder of females (including adult women and girls) from the Word Health Organization (WHO): South Africa had the fourth highest female interpersonal violence death rate out of the 183 countries listed by the WHO in 2016. Its rate is 12.5 per 100,000 which is 4.8 times the global average rate of 2.6.

According to Africa Check, a murder rate for adult women is calculated using the number of victims from the police and population estimates from Stats SA. Based on these figures, the adult women murder rate was 15.2 in 2017/18. This means that there were 15.2 murders for every 100,000 adult women in South Africa in that period.

According to the most recent data from 2017/18, a woman is murdered every three hours in South Africa.

Read: #IamNext: The abhorrent reality of femicide in South Africa

North west of the continent, Nigerian women are also in protest. Women in Port Harcourt rallied against the series of murder that have claimed the lives of eight women in various Port Harcourt hotels recently.

The latest victim was a teenage girl who was found strangled in her hotel room with her arms and legs bound in a similar manner to the seven women who were killed before her, prompting authorities and the public to believe there may be a serial killer targeting women in the area.

The Deputy Commissioner of Police in charge of Administration, Chuks Enwonwu, is quoted by Okay Africa saying, “In as much as societal values are disintegrating, we must go back to try to educate them (women) and discourage them from going into prostitution because that is how they fall victim to these crimes”.

Demonstrators however challenged this saying all women including those that participate in sex work, deserve protection and justice.

‘‘The women in Port Harcourt no longer feel safe, because we don’t know when we’ll be murdered. So, we ask for protection. The government can protect us. They can do something,” said one protester in a video by the BBC.

The only measures that have been taken so far are that Nigerian police have ordered hotels in the city to install closed-circuit television cameras to monitor activity on their premises or face closure.

A study recently commissioned by the ministry of women’s affairs and social development and the United Nations Population Fund (UNPFA) Nigeria with support from the Norwegian Government found out that 28% of Nigerian women aged 25-29 have experienced some form of physical violence since age 15. The study also reported that 15% of women experienced physical violence within 12 months preceding the survey

Dr. Abiola Akiyode-Afolabi, founding director of Women Advocates Research and Documentation Center (WARDC) told Africa Renewal, “We call on the Federal Government [of Nigeria] to create more institutions that can address the root causes of gender-based violence, the impunity that often goes with the scourge, implement policies and enact laws, for a stronger national response that can support victims and survivors \ of violence”.

Nigeria: A country with more churches and mosques than hospitals