Ramaphosa scandal looks set to intensify the ANC’s slide, ushering in a new era of politics 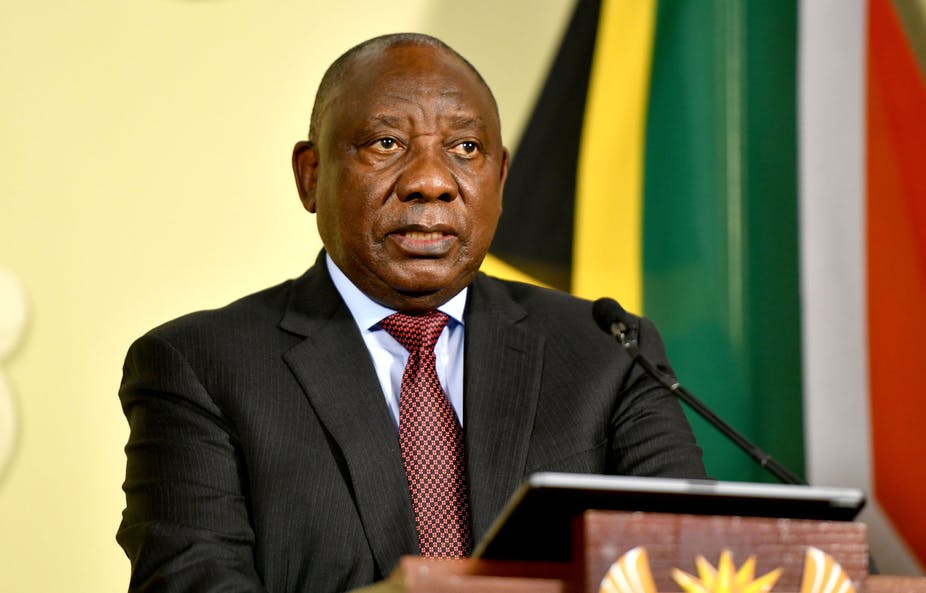 The party has steadily been losing popular support for the past two decades. It went into the last general elections in 2019 with only one trump card – Ramaphosa. He has been the party’s main vote-winner following his predecessor Jacob Zuma’s corrupt reign which ended in February 2018.

The ANC built its 2019 election campaign around Ramaphosa, after polls showed that he was its the only leader who continued to enjoy substantial credibility among voters. Even then, the ANC won only 57.5% of the national vote – the lowest since 1994.

But Ramaphosa’s image as an anti-corruption torchbearer – and vote winner – is in jeopardy after a controversial former spy boss laid criminal charges – including money laundering and defeating the ends of justice – against him in early June 2022. The charges related to the theft of a large amount of cash in US dollars from Ramaphosa’s farm in 2020. Ramaphosa owns a 4,500 hectare rare game and cattle farm, called Phala Phala, in the north east of South Africa.

Ramaphosa has confirmed that money – proceeds from the sale of game – was stolen and promised to cooperate with investigators.

Nevertheless, a number of questions remain unanswered. These include whether the president concealed a crime by not opening a case following the theft – and why. The matter is the subject of a police investigation.

Added to the seriousness of the allegations is the fact that the ANC and Ramaphosa have refused to openly address the issue and sheltered behind platitudes such as the “the law must be allowed to take its course”.

Based on decades of analysing the ANC and South African party politics and taking account of unfolding indicators, my view is that the Phala Phala incident has wrecked the ANC’s chances of emerging from future elections with an outright – albeit slim – majority.

The scandal, I believe, is changing the course of South African politics.

Eggs in one basket

The ANC’s electoral eggs are all in the Ramaphosa basket. Because of his electoral pull, he has become the pivot on which the ANC has revolved since his election as party president in 2017.

Opinion polls before the scandal showed that he enjoyed public trust, giving voters reason to endorse the ANC.

He has also managed to prevail over the faction allied to former party president Jacob Zuma in the ANC’s national executive committee – the highest decision-making body in between its five-yearly national conferences. His star has also been rising in the party’s provincial structures. His campaign for a second term as ANC president by mid-June had been endorsed by four out of nine provinces. Among these four, Limpopo, Eastern Cape and Mpumalanga will take significant numbers of voting delegates into the elective conference.

The US dollars scandal came as the ANC in the KwaZulu-Natal and Gauteng provinces were preparing to hold their provincial leadership elections and indicate preferences on future national leadership. Both provinces are key to ANC dynamics.

KwaZulu-Natal is a stronghold of the Zuma faction. Zuma enjoys popular support in the province, despite facing corruption charges and his ruinous reign being associated with state capture. His supporters have made a meal of the narrative that he is being politically persecuted by the judiciary – at Ramaphosa’s behest – for championing “radical economic transformation”.

They claim that the mainstream ANC is beholden to “white monopoly capital” and that nothing has changed in ownership patterns in the South African economy since 1994. But, the faction is tainted by it being the political home of an inordinate proportion of those in the ANC who have been implicated in state capture and corruption.

The scandal has in all likelihood shifted the balance of power against Ramaphosa. This will potentially have two major consequences. The first is that it could rob the ANC of its best chance of eliminating corruption in its ranks. And secondly, it could rob the party of any chance of regaining voter confidence, an agenda that has become synonymous with Ramaphosa.

An anti-corruption agenda in tatters

The party has needed an anti-corruption torchbearer to help rebuild it. Until now that has been Ramaphosa.

This is true even though he – and those in his camp – carry corruption baggage. This is clear from the reports of the judicial commission into state capture and corruption.

The latest scandal has stripped Ramaphosa of what credibility was left of his anti-corruption credentials.

It also potentially puts him in a tough spot vis-a-vis his position. If he is charged with dealing in – or not declaring – large amounts of foreign currency he’ll be forced to relinquish his leadership of the party and the state. This would be in terms of an ANC resolution requiring that party members charged with criminal offences vacate their positions in the party and state.

He will thus not be eligible for election as ANC president at the party’s national elective conference in December.

A likely scenario, however, is that the ANC simply stops enforcing its step-aside measure. As it is, a number of ANC candidates who command sufficient support in the party’s structures to get elected into leadership positions have been charged with corruption.

But setting aside the rule will destabilise the ANC further given that a number of aspiring candidates have already been disqualified on these grounds.

The ANC has been using multiple tactics to fend off the looming calamity of not having Ramaphosa as its president and that of the country, in the clear absence of a credible candidate to take over.

The party’s mantra has been that the unfolding investigation should be allowed take its course.

At the same time Ramaphosa loyalists have been mobilised while the party’s leadership has closed ranks, fending off dissenting voices. This, despite reportedly not being taken into confidence by Ramaphosa.

The ANC in parliament has embraced the party line and attempted to delegitimise the storm of attacks by the opposition. It has created the impression of it being business as usual as far as the presidency is concerned. So far, in domestic politics, Ramaphosa has presented the president’s budget vote to parliament, delivered a speech to mark Youth Day, and received the last instalments the Zondo Commission report.

The silence, secrecy and deferments testified to the ANC having every reason to fear losing the the outright majority in national and provincial elections in 2024.

The ANC’s shelves are bare. Its prime anti-corruption candidate has been compromised and ridiculed. It has no credible alternative leaders. As such the “renew and rebuild” programme associated with Ramaphosa is discredited.

As if that was not trouble enough, the party’s policy documents in preparation for its upcoming national policy conference (mooted for July 2022) offer little.

Policy alternatives are nothing new but unconvincing reinventions of previous stabs at fixing the country’s intractable socio-economic problems.

Chances that implementation will be better this time around falter in the morass of a weakened state.

The ANC was already in trouble long before the scandal broke. The euphoria that followed Ramaphosa’s promises of renewal had already faded. Phala Phala simply confirmed the new status quo.

It is a new type of ANC on the horizon – a tainted party with declining hegemony. It increasingly seems unlikely to muster the level of general electoral support that’ll ensure an outright national majority come 2024.

The spectre of coalition politics, with its political brinkmanship and policy ransoms beckons.

The rise of xenophobia: the road to ruin