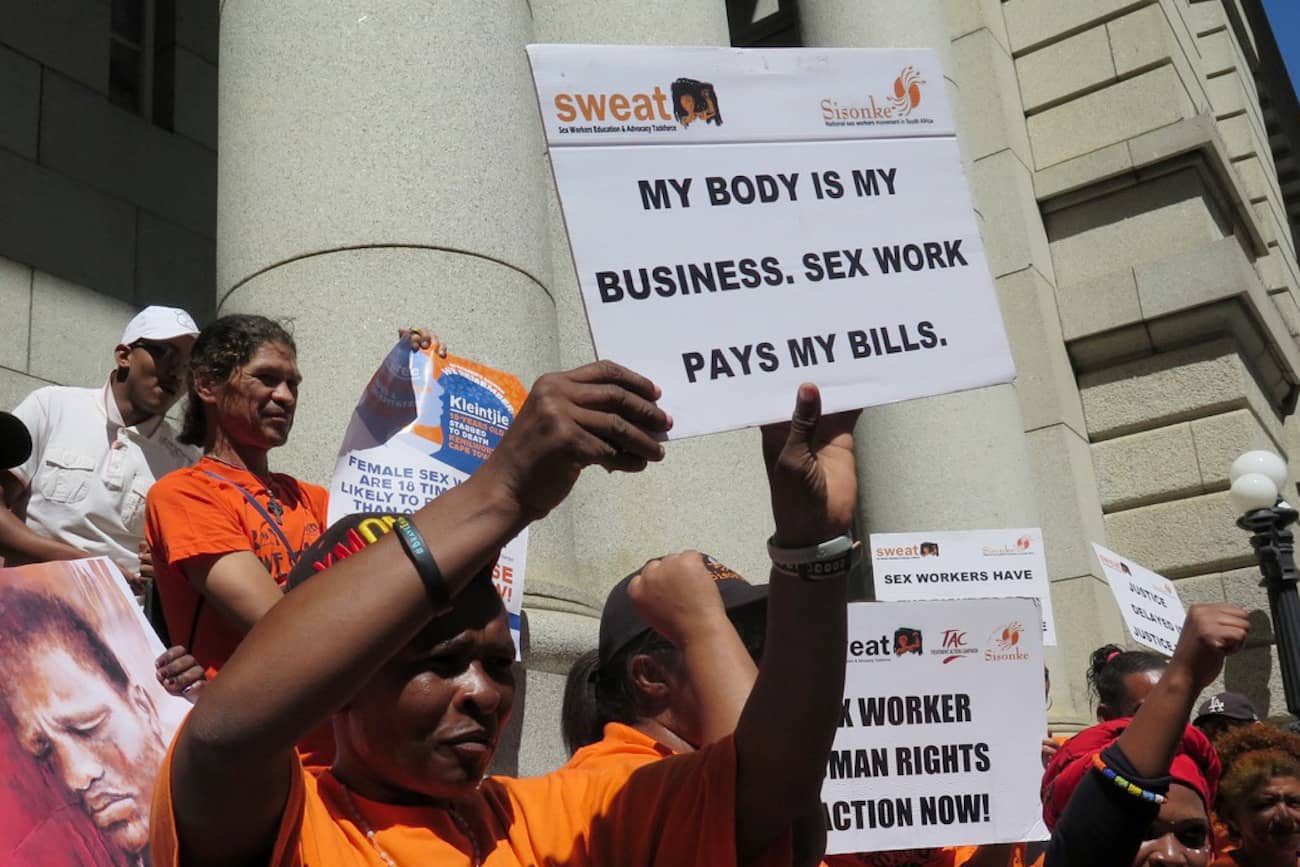 “Two years ago a policeman arrested me. He was alone and took me somewhere in the town in his car and then told me to give him free services and so I did,” a sex worker from Tzaneen, Limpopo, is quoted as saying in a new report.

She was one of 46 female sex workers interviewed for a research report on why sex work should be decriminalised in South Africa. Many of the sex workers described cases of rape, corruption and harassment by police officers.

The report was released by Human Rights Watch (HRW) and Sex Workers Education and Advocacy Taskforce (SWEAT) in Johannesburg on Wednesday.

“This report attempts to represent some of the fear, emotional pain and frustration that South African sex workers experience because the work they do … is criminalised,” read the report.

“For many poor black women with limited formal education, selling sex is a viable means of making a living and supporting their children and other dependents. Sex workers with primary school education can earn nearly six times more than typical income from formal employment, such as domestic work,” read the report.

South Africa currently uses the total criminalisation model which means the sale and purchase of sex is illegal. But proving the crime of sex work means a police officer has to catch a sex worker in the act of providing sex for remuneration.

The report said municipal bylaws like solicitation, being a public nuisance or loitering were often used to arrest and detain sex workers. The sex workers who were interviewed said these arrests and detentions, which often lasted two nights, did not deter them from continuing.

Lindah Dumba, Limpopo provincial coordinator for Sisonke (a national movement started by sex workers), said that many sex workers in Limpopo, were forced to have sex with police officers as a form of bail. Police also extorted money from sex workers.

She said sex workers in Limpopo who come from Malawi, Zambia and Zimbabwe face a double stigma because they were also foreign nationals. Some of them were undocumented so they feared deportation if they did not have sex with police officers.

The report called for an immediate moratorium on arrests and detention of sex workers at least until the legal status of sex work was determined.

It recommended that the police publicly commit to prohibiting torture, coerced confessions or telling detainees to sign “admission of guilt” paperwork without explaining what it meant. This should be accompanied by regular training on rights of sex workers and non-discriminatory policing, recommended the report.

Civil society organisations like SWEAT and Sisonke want the total decriminalisation of sex work, citing the right of sex workers to bodily autonomy and choosing an occupation.

But other organisations, such as Embrace Dignity, founded by former deputy minister of defence and health Nozizwe Madlala-Routledge, are calling for partial criminalisation of sex work. This model decriminalises the selling of sex but criminalises the buyer. It views sex work as inherently exploitative and harmful.

But one of the panelists, Sky Wheeler, a researcher at HRW, said the assumption that sex workers were victims of human trafficking was inaccurate.

“Of the 46 women that I interviewed [for the report], none of them were being coerced into doing sex work. In every case they had chosen to do the work because it was the best option that they saw for themselves,” she said.

“Her current work [allowed] her a lot of flexibility and she earned a lot more than she would picking fruit which was her real other option – working eight [to] 12 hour shifts picking fruit in the hot sun for very little money,” she said. “It wasn’t only the most realistic option for them but many of the sex workers actually enjoyed what they were doing and felt that they were providing an important service.”

Lesego Tlhwale, media officer for SWEAT, said the reality was that there were people being trafficked “and we want to help those people who were not given a choice”. She said criminalising sex work deterred sex workers from reporting trafficking crimes.

Tlhwale said decriminalising sex work would ensure that sex workers report crimes against them, have safe working environments, and access to health care.

The report said all of the sex workers interviewed had experienced an improvement in health care services over the past few years. “[They] said they had free, relatively accessible, non-discriminatory access to health care, including reproductive health care and HIV treatment,” read the report.

The sex workers were also approached by outreach health workers on the streets or in brothels who provided them with condoms, lubricants, information and education and sometimes transport to clinics. One of the clinics in central Johannesburg, Esselen Street Clinic, run by Wits Reproductive Health and HIV Institute, was known by sex workers to provide comprehensive primary health care.

But it said police detained peer educators (sex workers who worked in clinics), and sex workers also missed medical appointments because they had been arrested. Some sex workers were also denied access to their HIV medicines while being detained for a few days at a time.

The Motlanthe Commission’s anniversary of shame

Ghana hopes ‘Year of Return’ will boost tourism. But caution is needed