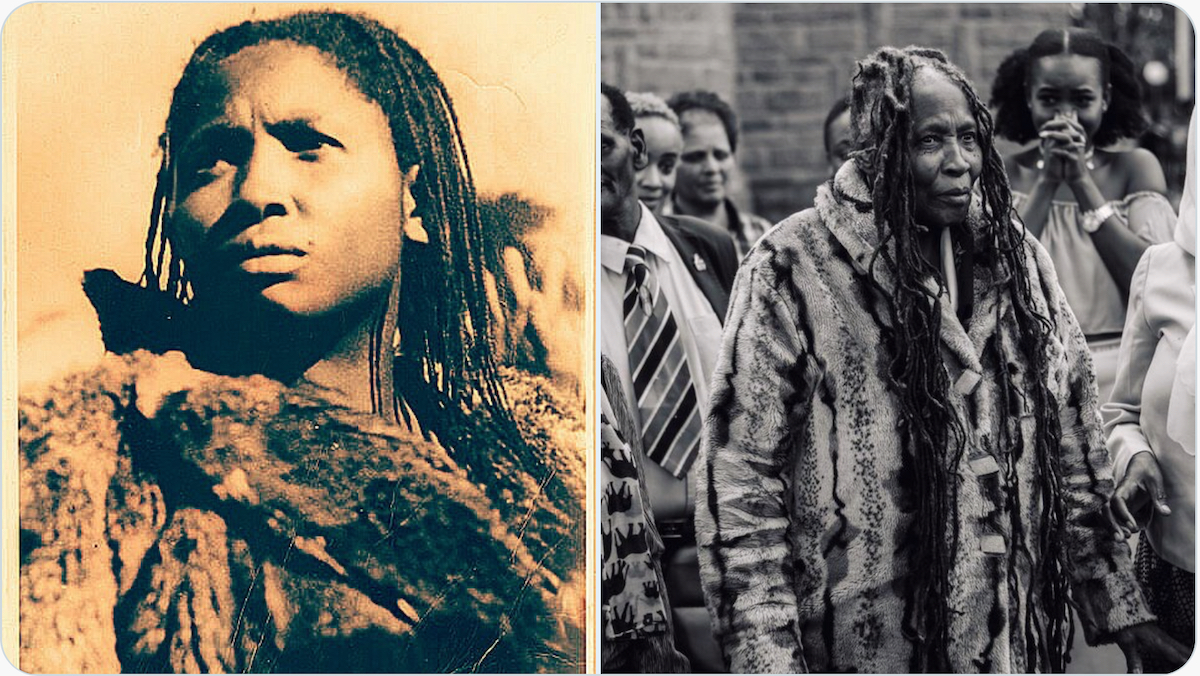 Kenyan election years are a turbulent time and this year is no different. President Uhuru Kenyatta is at the end of his tenure and the cracks in Kenya’s first family are showing. But first a little back story.

The Mau Mau rebellion or uprising was a war that happened between the Kenya Land and Freedom Army, also known as the Mau Mau, and the British authorities that lasted 8 years. It stemmed from issues such as the expulsion of Kikuyu tenants from settler farms, loss of land to white settlers, poverty, and lack of true political representation for Africans provided the momentum for the revolt.

Women were at the core of the rebellion as they maintained the supply lines for the food, ammunition, medical care, and information that sustained the guerrilla fighters. Unfortunately, it is unknown how many women braved the regular journey between colonial territory and Mau Mau hideouts or how many fought in the war but one woman stood apart.

Muthoni wa Kirima is the only woman who attained the rank of Field Marshal. Dedan Kimathi named her ‘Weaver Bird’ because of her ability to weave brilliant strategies. She persisted through an 11-year separation from her husband who was also a member of the Mau Mau, beatings and abuse from loyalist groups and the war also took away her ability to conceive (something she laments). She’s often been quoted as saying that “Kenya is my child.”

Kenya is my child

And when Kenya gained independence in 1963 she was still living in the forest with the core of the Mau Mau rebels that had survived the bloody suppression of 1956. Despite the losses they had suffered the Mau Mau remained an illegal movement even after independence.

In fact Kenya’s founding president and father of the outgoing president was known for actively being anti-Mau Mau. In a public speech in Githunguri in 1962, he said, “Mau Mau was a disease which had been eradicated, and must never be remembered again.” It was at this point that a purposeful suppression of the Mau Mau legacy and its veterans was started.

Field Marshal Muthoni like many of her counterparts remained landless and poor well after independence despite being part of the movement that started Britain’s retreat. The country’s first leader plundered everything he could and the regimes that came after followed suit, but nothing was done to repay the veteran’s sacrifice.

She told the Economist in 2013 that none of the Kenyan governments have been fairer than the colonial one, and when she was asked what she thought of the son of Kenya’s first president she said cryptically in Kikuyu, “From the womb comes a warrior, a king, a rich man, a criminal, and a killer.”

At the time she proclaimed that it was too soon for a trim.

The legacy of a revolutionary and a symbol of hope

In pictures documenting Kenya’s history, Field Marshall and many Mau Mau fighters let their hair lock as a sign of further defiance against colonial rule. Of course, given the nature of guerrilla warfare, this choice was also a matter of necessity but once independence was ‘won’ many of them did not cut off their wartime locs.

Field Marshall Muthoni wa Kirima’s hair became a symbol of a country waiting for ‘Freedom’, waiting for prosperity, and a time when the citizenry could thrive rather than survive.

She in particular, is famously known for proclaiming that she would not cut her dreadlocks until she saw the Kenya she fought for, alluding to the fact that there is little to recommend the post-colonial regimes. Her hair became a symbol of a country waiting for ‘Freedom’, waiting for prosperity, and a time when the citizenry could thrive rather than survive.

Now after 70 years of growing her floor-length testimony, Field Marshall was tonsured in a very public ceremony. Whether or not she was coerced into it or it was voluntary will be a debate that will likely endure but some things about the event have left many shocked, disgusted, and bereaved.

The timing was too convenient to claim that it was not for political purposes, the fact that the shaving was done by the wife of Jomo Kenyatta whose sentiments were widely known, and she was not a part of the uprising nor did she support the relevant groups that reached out to her after independence, is also unsettling.

Then as an elder and a freedom fighter, the occasion lacked a certain reverence. Maybe it was horrific to watch because of the underlying implications and because she is a national hero. Or maybe we understand how far we are from the ideal she set on our behalf and we are not ready to let that go.

University of Nairobi historian colleague, Margaret Gachihi, who has researched the role women played in Mau, told the Elephant that, “Marshal Muthoni’s physical and symbolic shaving of her dreadlocks marks the end of an era in the history of the Mau liberation war. Not many took note of her words that at 92 years she felt the end was nigh.”

“She’s closing a very special and important period of our nationalist history. In her shaving, she shed her burden to the next generation, indeed threw the gauntlet to those who honour and uphold the legacy of what the war represented. What’s sad, and ironic, is that recognition of our gallant freedom fighters has been left to the very last of their days.”

Her sentiments were echoed by the Field Marshall’s granddaughter Ciru Ngigi on her Facebook, “When elders tell you they’ve given enough to the cause, you don’t question their sanity or wonder about their intelligence. You pick up their weapons and step right in line… She has raised us all as African women so well. We may want to take our time to mourn some things, but please oh, we cannot be the sons and daughters who stopped when she asked to rest.”

And lest we forget her immense gift Ngigi added, “Imagine carrying the symbol of the hardest, most gruesome eleven years of your life on your head for seven decades for a thankless people? Yeah, you’d want to lay that burden down too at some point.”

At the end of the shaving, we see Marshall Muthoni’s dreadlocks put away and we hope we get to see her wish -for them to be showcased in a museum for posterity- realised in the near future. That will be the true measure of the sanctity of the tonsuring outside of seemingly darker motives.

Related Topics:DecolonisationGovernanceKenyaLand Rights
Up Next

Tanzania’s Hassan has put out positive signals: deeper change is yet to come

Obasanjo: from a Nigerian village to the pinnacle of power on the continent