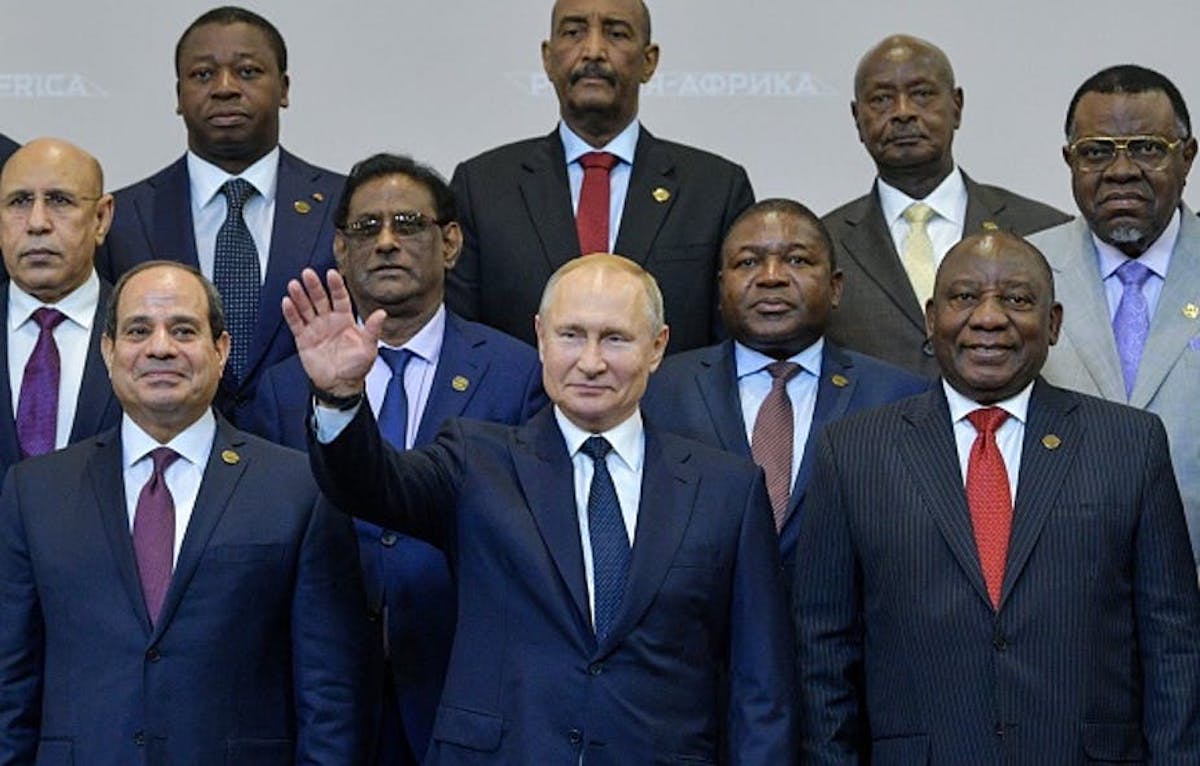 It’s commonly held that Russian president Vladimir Putin’s objective for invading Ukraine is to install a puppet regime that is pliable to Moscow’s interests. If so, this would be consistent with the approach Russia has taken with its forays into Africa in recent years.

Drawing from its Syria playbook, Russia has propped up proxies in Libya, Central African Republic, Mali and Sudan. Moscow also has its sights on another half dozen African leaders facing varying degrees of vulnerability.

In the process, African citizen and sovereign interests have given way to Russian priorities.

This elite cooption strategy effectively serves Russia’s strategic objectives in Africa. These include, first, to gain a foothold in the southern Mediterranean and Red Sea, putting Russia in a position to threaten NATO’s southern flank and international shipping chokeholds.

Second, to demonstrate Russia’s Great Power status whose interests must be considered in every region of the world.

And third, to displace western influence in Africa while undermining support for democracy.

Russia has often used extralegal tools to pursue its objectives on the continent. It has deployed mercenaries, run disinformation campaigns, interfered in elections and bartered arms for resources. This low-cost, high yield approach has enabled Moscow to expand its influence in Africa more rapidly, arguably, than any other external actor since 2018 when Russia ramped up its Africa engagements.

Regrettably for African citizens, these tactics are all inherently destabilising. Moreover, the result is disenfranchisement and diminished African sovereignty.

Russia’s expanding influence portends a bleak vision for Africa. In effect, Russia is attempting to export its governance model – of an authoritarian, kleptocratic, and transactional regime – onto Africa.

This is especially problematic since there are at least a handful of African leaders who are more than happy to go down this path. Never mind that this diverges wildly from the democratic aspirations held by the vast majority of African citizens.

The United Nations’ vote on Russia’s invasion in Ukraine provides a useful prism to understand relationships between Moscow and particular African countries. It reveals a spectrum of governance norms and visions for Africa. It is through these lenses and interests that groups of African countries can be expected to engage with Russia moving forward – with far-reaching consequences for democracy, security and sovereignty on the continent.

The UN General Assembly resolution condemning the Russian aggression garnered only one dissenting African vote – Eritrea. This was accompanied by strong denunciations of the Russian attack on Ukraine by the African Union (AU) and the Economic Community of West African States. The current chair of the AU, Senegal’s President Macky Sall, and AU Commission chairperson Moussa Faki Mahamat also criticised Russia’s unprovoked war.

In total, 28 of Africa’s 54 countries voted to condemn the Russian invasion, 16 abstained and 9 did not vote. All in all, the vote was a remarkable rebuke of Moscow from a continent where many African leaders’ worldviews are shaped by a posture of non-alignment, raw legacies from the Cold War, African diplomatic politesse, and a desire to remain neutral in Great Power rivalries.

The vote also revealed a widening segmentation of governance norms in Africa. And it shows that African relations with Russia from here on in will not be uniform – nor abruptly reversed.

The African countries that abstained, or did not vote, did so for a variety of reasons. The most obvious category of country unwilling to condemn Russia was those with African leaders who have been co-opted by Moscow. These included Faustin-Archange Touadéra in the Central African Republic, Lt. General Abdel Fattah al-Burhan in Sudan, and Colonel Assimi Goïta in Mali.

These leaders lack legitimacy domestically. They depend on Moscow’s political and mercenary support to hold onto power.

A second category among the countries that abstained or did not vote is those with leaders who have patronage ties with Russia. Those in power in Algeria, Angola, Burundi, Guinea, Equatorial Guinea, Madagascar, Mozambique, South Sudan, Uganda and Zimbabwe benefit from Russian arms, disinformation or political cover. These leaders, moreover, have no interest in democratic processes that may threaten their hold on power.

Others who abstained or did not vote likely did so for ideological reasons rooted in their traditions of non-alignment. These included Morocco, Namibia, Senegal and South Africa. While they may maintain ties to Moscow, they are appalled by Russia’s imperialistic actions. By and large, they support the upholding of international law to maintain peace and security.

Those who voted to condemn the invasion included leading African democracies and democratisers. These comprised Botswana, Cabo Verde, Ghana, Malawi, Mauritius, Niger, Nigeria, Kenya, Seychelles, Sierra Leone and Zambia. They represent a mix of motivations. But I calculated that the median Global Freedom score for this group of 28 countries based on Freedom House’s annual (0-100) ratings is 20 points higher than those that did not vote to condemn.

The powerful speech by Kenya’s ambassador to the United Nations, Martin Kimani, in defence of respecting sovereignty, territorial integrity, and resolving differences through non-violent means, epitomises the views of this group and its support for a rules-based order. Many have also taken the lead in condemning the surge in coups and third termism on the continent.

If the past is any indication, Russia can be expected to escalate its influence campaign in Africa in reaction to its international isolation following the Ukraine invasion.

To mitigate Russia’s malign influences, African and international actors wishing to advance a democratic, rules-based order for the continent should take some decisive steps.

First is to invest in democratic institutions and democratic partners. Democratic checks and balances are the best bulwark against nefarious external influences.

Second, coups and third termism must be strongly condemned.

Third, building the capacity and space of African journalists is especially vital. Without a free and informed discourse, it is difficult to have a national dialogue on priorities and preferences. Or to hold political leaders accountable for their actions.

Fourth, is to enforce the African Convention for the Elimination of Mercenarism, which went into effect in 1985. This legally prohibits African states from allowing mercenaries into their territory and should be employed to bar Wagner from the continent.

Fifth, there must be investment in Africa’s professional militaries. This will bolster democracy. A growing number of African militaries have become politicised. This has contributed to the upsurge of coups as well as the use of militaries as a coercive tool against political opponents.

Another means of enhancing African agency is to support the efforts of African regional organisations such as the African Union. The AU and the regional economic communities have adopted charters advancing democratic norms and processes. These bodies can help uphold democratic norms when there are violations. And they can reduce the scope for external interference.

Internationally, democratic governments need to sustain long-term partnerships with their African counterparts. African countries with legitimately elected leaders shouldn’t be put in a position to choose between international partners. It’s reasonable that African governments will want to have multiple external relationships subject to their context and interests. This is especially so given the legacies of colonialism and the struggles for independence that defined the creation of many African countries. Rather, the focus of these partnerships should be on maximising a shared vision of what a rules-based order should look like and how it can be put into practice.

In the end, Russia doesn’t have much to offer African leaders other than coercive tools. If these are diminished, then so too will be Russia’s destabilising influences on the continent.

Money, influence and heroism: the allure of political power in Kenya