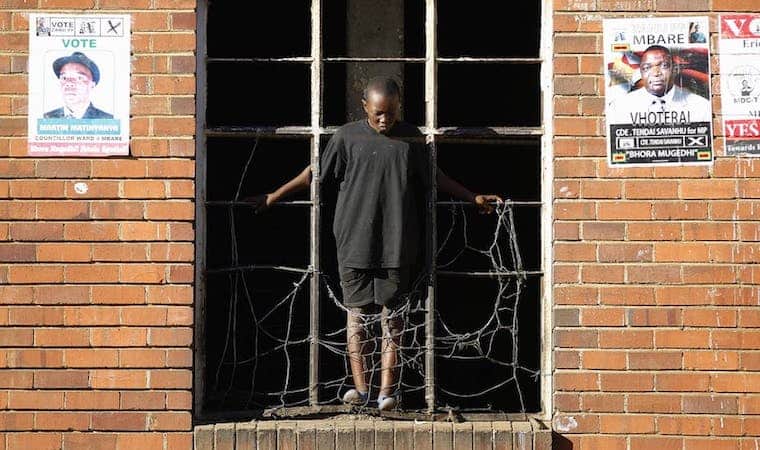 Zimbabwe will hold fresh elections at the end of July this year, a sign that, following decades of rule under autocratic leader Robert Mugabe, the southern African nation is on the path towards democracy.

But are the country’s young people ready to get involved in politics?

The signs elsewhere on the continent aren’t hopeful. Given Africa’s youth bulge, in which 39.5% of the continent’s population is aged between 18 and 45, it wouldn’t be unreasonable to expect the majority of voters would be young people. But this is not the case.

For the most part, young people are apathetic when it comes to elections. While they’re the most affected by democratic processes, they appear to be the least interested in them. For example in Nigeria’s 2011 polls, only 52.6% of young people voted while in South Africa’s 2014 national elections, apathy was the reason for a registration level of just 33% for 18 and 19 year olds.

This phenomenon isn’t unique to Africa. Across the world young voters are failing to turn up at the polls. Levels of youth participation are very low in the UK and Ireland and most of the southern European states like Italy, Greece and Portugal.

In my recent study, I set out to explore the level of youth participation (as candidates, voters and activists) in Zimbabwe’s elections and governance processes, what restricts their participation and what can be done to support them. I defined youth as people aged between 15 and 35.

My evidence showed that their participation is low, hampered by restrictive political parties and a lack of three things – interest, information and funds.

To change this, there needs to be an effort to create political, structural and physical spaces that allow for their meaningful participation. This could, for example, include allocating quotas to young people and prioritising youth empowerment. South Africa’s two main opposition parties have done this well – young people lead the Democratic Alliance as well as the Economic Freedom Fighters.

A third of the young people I interviewed said that they hadn’t taken part in activities such as rallies, council meetings and meetings within communities. A quarter of them said they didn’t participate often while only a fifth said they did so extremely often.

This exclusion is driven by what the scholar and expert on young people, Barry Checkoway, calls ‘adultism’ – when adults take a position that they are better than young people and prescribe solutions for them. Young people are seen as potentially dangerous elements that should be kept away from key decision-making processes.

On top of this, poverty makes young people particularly vulnerable to being excluded. About 70% of young people in Zimbabwe are unemployed. And those that work experience extreme poverty, earning less than US$2 per capita per day. This renders them susceptible to exploitation and control – young people who are poor are ready to sell their rights, for food hand-outs and promises of jobs that never materialise.

But it’s not just about the adults. Young people are also to blame for low participation.

In the interviews they showed a lack of interest in a system they felt they couldn’t change. They share this apathy with many other Zimbabweans. The legitimacy of the country’s elections since independence has always been a thorny issue. The opposition has regularly raised accusations of vote-buying, electoral fraud, vote rigging, as well as the intimidation of voters by the ruling party – Zanu-PF. This has led many to question the legitimacy of the electoral process.

Other barriers to young people include a lack of financial resources, lack of capacity, lack of information and the absence of a culture of positive engagement. Most believed that young people were prepared to run for office in the 2018 elections. But nearly half indicated that young people needed more support, such as leadership training, in preparation for running for office.

When asked what the top five solutions to improving the participation of young people were the answers included:

Young people should be viewed as a vital source of information which justifies the need for adults to give them space and opportunities to engage meaningfully. This could be done through local campaigns, like the United Nations’ ‘Not Too Young to Run’ campaign. This promotes the right for young people to run for office, creates awareness and mobilises them.

Young people also need to be equipped to participate in politics. This includes getting support through leadership training and training in elections and governance processes. Finally, resources and support must be given to youth-led initiatives that are reaching out to young people.

Advertisement
Related Topics:PoliticsYouthZimbabwe
Up Next

What ‘blackface’ tells us about China’s patronising attitude towards Africa