Zimbabwe: a future finely balanced between democracy and militarisation
Advertisement 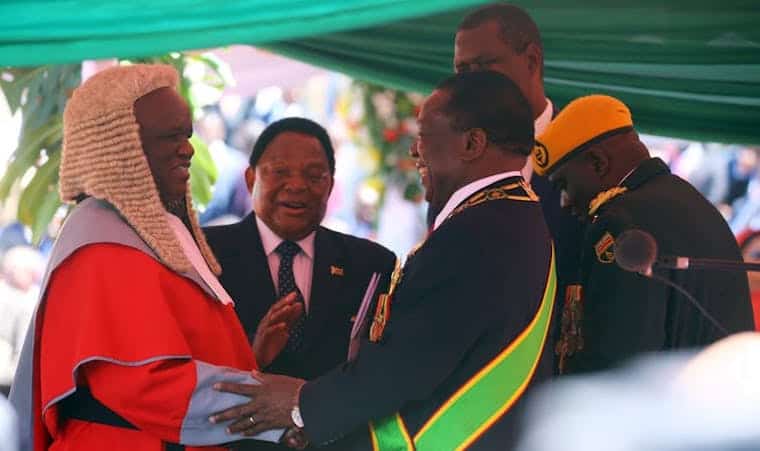 Zimbabwean scholar and activist Brian Raftopoulos’ remarks during a public meeting at the University of Cape Town five years ago come to mind. As all were wondering what would happen in the weeks before the much-marred 2013 Zimbabwean election, Raftopoulos argued that

Zimbabwe’s military-economic élite – a new capitalist class at an early stage – will not be removed just with elections.

Mnangagwa’s next five years may see this prediction reach its endpoint. His
billboards said he would deliver the new country Zimbabweans want: the promise remains poised on tenterhooks. The classic dynamic in politics everywhere – the interplay between militarisation and democratisation – looms large.

Raftopoulos’ proviso that a “partnership to prevent militaristic moves” was necessary in 2013 may be more apposite (and trickier) now than ever. The prospects for the next elections in 2023 (barring constitutional changes – possible because Zanu-PF MPs make up more than the two-thirds in Parliament needed to change that hard-won document) could take stark contours.

The contest is, and will be, far beyond a battle of two parties and their main protagonists. It will be between increasing democratic participation – starting with the classic precepts of free and fair elections – or a securitisation process much less stealthy than before.

This is the most important point to consider about Zimbabwe’s medium-term prospects. The others are moves within Zanu-PF itself, dynamics within the MDC-Alliance and what happens to the economy.

After the Constitutional Court’s ruling confirming Mnangagwa as the “duly” elected president, MDC-Alliance leader Nelson Chamisa suggested that he and Mnangagwa needed a serious discussion that would lead to the breaking of Zimbabwe’s legacy of violent and jimmied elections.

It’s still an open question whether such a discussion would lead to a coalition government, or the space for the faction-ridden MDC-Alliance to flex the muscles of a loyal opposition and to rebuild. Its bad experience during the 2009-2013 “government of national unity” might militate against a repeat. But the wider need to cushion the new régime from militarisation is worth considering.

The cautionary note to the MDC-Alliance about any such new dispensation might be: don’t neglect your badly fractured party and its allies needing to be in the fold; and don’t sideline your enemies within precipitously.

Meanwhile, many among the MDC-Alliance and its supporters fear the Zanu-PF machine is poised to wipe them out permanently.

Much related to the above and perhaps the key, is Zanu-PF itself. The battle between Mnangagwa and Vice-President Constantino Chiwenga could be overdrawn, but the tragic killings of August 1 have thrown it into stark relief.

Can no one in power know who shot the demonstrators and innocent bystanders? Could Chiwenga really say that news of the shootings was “fake” and aver the MDC-Alliance deployed cadres to do the shooting to discredit Zanu-PF?

In any case, a military unit came in, because – so says “the state” – the police could not contain the violence. On site observers, however, attest that the police and the demonstrators were enjoying a friendly encounter, including selfies and dancing. Then the soldiers arrived.

The journalists who were there say the men with guns were the Presidential Guard, under Chiwenga’s control: after they arrived and started killing, the violence and car burning ensued.
One analysis says this tragedy has exposed Zimbabwe’s parallel states. Furthermore, the senior soldiers have just had their retirements deferred. Perhaps Mnangagwa’s inaugural Freudian slip – when he failed to acknowledge his vice- presidents – revealed his inner desire to be rid of Chiwenga.

One can only hope that the promised commission of inquiry will unearth what happened, and deal with it summarily.

The Patriot, one of the fractured ruling party’s media mouthpieces, reveals some party propagandists’ thinking about democracy and human rights. ‘Unmasking CSU’ (Counselling Services Unit, a long-serving source of succour for wounded democracy activists, as well as an advocacy NGO) paints the CSU and other human rights organisations writing “fake reports” to fan “tribalism and violence to achieve regime change”. Only words? If they turn into bullets Zimbabwe will have stepped down the ladder a long, long way.

Ticking like a time bomb is the ruined economy. No real money and a gargantuan number of unemployed embedded in the precarious “informal sector”, if they’re not eking out a penurious peasant’s existence. Their situation is so miserable that they are easily bribed – with flour and subsidised prices for their maize backed by intimidation from the chiefs – to vote.

Help from elsewhere might not be forthcoming either, or not helpful if it is. The rulers’ faux pas against the demonstrators has worried even its dedicated supporters in the wider world, imperilling even the demanding strictures of the International Monetary Fund and World Bank re-engagement. The “West” dangled the slightly less rigorous chalice of Heavily Indebted Poor Country status in front of Mnangagwa’s finance bureaucrats before the elections. Even though Zimbabwe is considered “too rich” for the easier debt-relief packages that comes with the status, broad hints were made. It’s doubtful if those whispers will get louder now.

In any case, as civil society activist Takura Zhangazha has written, IMF and World Bank policies are woefully inadequate for Zimbabwe’s problems: it is highly unlikely that its poor majority will be lifted to a decent life under their aegis.

As for private investment: Zimbabwe will again be fair game for the cowboys – from the east as well as the west these days.

Zimbabwe is in a precarious position. Its immediate future rests under the sword of Damocles. The threads of democracy have to be thickened. One hopes the chronicle of its demise cannot be foretold.

David B. Moore, Professor of Development Studies and Visiting Researcher, Institute of Pan-African Thought and Conversation, University of Johannesburg