Fighting for expression: how homosexuality is breaking out into Africa’s public life
Advertisement 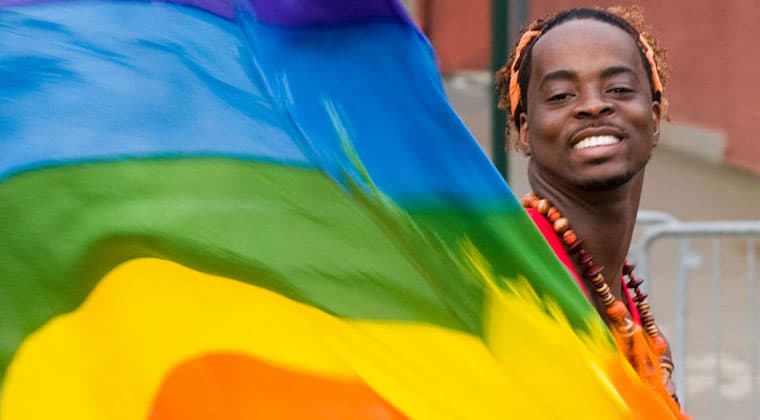 Issues of sexuality are a hot topic right now. People are either arguing that homosexuality is ‘un-African’, being wildly successful and queer, sleeping with another woman or man on the down-low, or enacting violence against members of the LGBT community. In one way or another, sexuality is a big part of our lives and there is a cacophony of voices surrounding it.

The idea that ‘homosexuality is not African’ is a very disturbing notion. Historically, homosexuality has always been present in African society. Consider marital and economic practices in which women married other women to maintain the household, to certain religious practices, or, simply, to practices stemming from desire.

Changes to the political landscape

The continent remains a multi-faceted site of contention when it comes to issues surrounding LGBTI persons, as reflected in two recent occurrences. First was the legal victory by Lesbians, Gays and Bisexuals of Botswana (LEGABIBO), the only LGBTI organisation in Botswana, allowing them to register as an organisation. The court case Attorney General v Thuto Rammoge and 19 Others was the culmination of an 11-year struggle to register the organisation and saw a full bench of the Court of Appeal of Botswana uphold the decision of the High Court. They ordered the Botswana government to register LEGABIBO as a society in terms of the Societies Act.

The judgment in favour of LEGABIBO saw the organisation being allowed to register legally as an organisation even though homosexuality is not legal in that country. The coordinator of the organisation, Anna Mmolai-Chalmers, stated that ‘this judgment is one of the many occurrences in Botswana where democracy has come into play. The courts are protecting minority rights and giving a voice to the LGBTI community.’

Taking the situation in Botswana further, Seychelles recently decriminalised same sex practices within the country. The Seychelles National Assembly passed an amendment to the penal code that decriminalises the act of sodomy. The possible change was first floated by President James Michel during his state of the nation address and a representative from the ruling Parti Lepep urged politicians to fight for equality, including that of sexual preference.Another discernible political shift was the first Africa Regional Seminar titled ‘Finding practical solutions to address violence and discrimination against persons based on sexual orientation and gender identity and expression’. This event marked a change in the socio-political climate in terms of sexuality on the continent as the meeting brought together human rights organisations, activists and even an awkward government official or two to discuss how best to tackle the widespread violence faced by persons due to their Sexual Orientation and Gender Identity Expression (SOGIE).

This conference had open dialogue between multiple facets of society from almost every country on the continent. Although some prominent and powerful figures may have shown slight discomfort at speaking on ‘gay issues’ it indicated a move towards more open dialogue on issues of violence directed at African citizens. The core theme that emerged was that no matter your views or personal ideas about sexuality, violence against other Africans is never justified.

Adding on to the conversations and connections that were formed during the regional seminar, the third annual Pan-Africa IGLA conference was held in Johannesburg. The regional LGBTI conference saw over 180 delegates hailing from 34 countries gather together in a space that saw them speak to an array of issues that they faced, have contentious conversations, build capacity and come together.

Cultural curbing of homophobia and spreading of same-sex ideas

Not only has there been a change politically but in the artistic space as well. The literary scene is bursting with stories of same-sex relationships and experiences. Examples include the Short Sharp Stories anthology, queer adaptations of popular African novels and collections such as Queer Africa and Walking the Tight Rope. The most recent addition to this African literary canon is the Proudly Malawian anthology, which is a collection of stories by lesbians and non-gender-conforming persons. This follows in the footsteps of a previous anthology, titled Queer Malawi, which chronicled the lives of Malawians within the LGBTI community.

The music scene followed suit with the release of the Same Love remix in Kenya, which sparked a national debate on sexuality, pornography and all matters taboo. The video by Kenyan group Art Attack, which was banned by the Kenyan Film and Classification Board, became somewhat of a phenomenon, with the YouTube-based video garnering hundreds of thousands of views. The story was also picked up by local and international platforms.

Try as one might, it would seem that we cannot escape the ‘gay’ on the continent anymore. With every wave of societal backlash, in the form of violence and discrimination, there seems to be an equal and opposing wave in the form of political reform, social justice and artistic expression. In some cases there is even an economic push-back reaction, with some spaces selling themselves asgay-friendly.

It is natural to us

It may be time for all of us to disembark from this struggle bus on which we continue to pretend that we do not understand sex and sexuality on the continent outside of the missionary position once a week, within the confines of marriage. This continent is filled with a passionate, eclectic people who have a wisdom and understanding of life.
So whether we are marching in support of LGBTI people, protesting against homosexuality, peddling homophobia or adding to arts and culture, we simply cannot say that sexuality remains a non-issue. The notion that one can continue to sweep the idea of multiple sexualities under the carpet is no longer feasible. This denial not only breeds a society that is prone to violence but also shows very little insight and empathy.

Related Topics:Human rights LGBTQI+
Up Next

Is it really a good idea to make racist behaviour a crime?