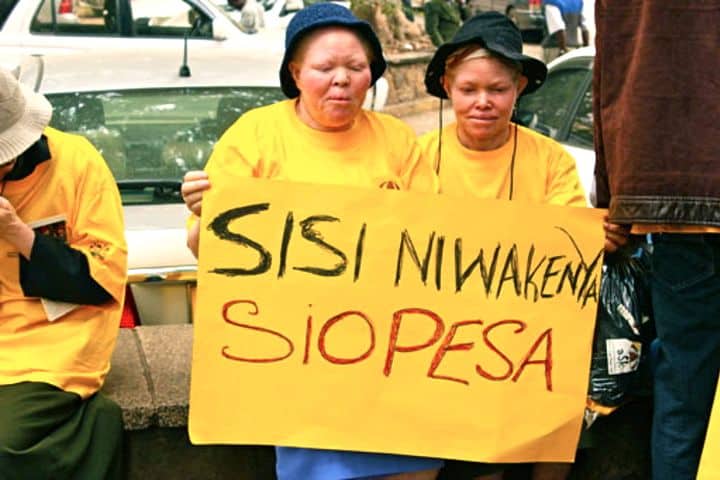 Everyday they protect themselves, some with wide-brim hats to hide from the sun’s harmful ultraviolet rays and others with sharp weapons in case trouble, in the form of an attacker, comes along the way. Albino women suffer rape and sexual violence. Local legends claim that sexual intercourse with a person with albinism can treat health problems.

Persecution
This is why the United Nations placed Tanzania at the top of the list of African countries with the highest persecution rate of albinos. In a recent report, the UN Office of the High Commissioner criticized the low number of prosecutions for the killing of albinos. Out of the reported 72 murders documented since 2000, only five have been successfully prosecuted.
In this article, six women from different regions in Tanzania share stories on love, family and survival.

Grace Medaldi looked for love in a relationship with a man who threatened her when she got pregnant. “It will be unto you if you give birth to a child like you,” she says he told her. The “like you” was a reference to Grace’s skin. She has albinism, a genetically inherited condition characterized by a deficit in melanin production that leaves albinos with pale skin, usually light, sometimes reddish eyes and blond hair.

Grace’s baby did not have albinism, but her boyfriend left her anyway. That was nearly nine years ago. Today, Grace, aged 27, is by herself. No romance, no relatives who understand her condition and no child to come home to. She left her kid with her family in the village and she tries to visit every so often. Two of her relatives who had albinism died of diseases. Persons with albinism (or PWAs, as some prefer to be called) are vulnerable to a number of health ailments, mainly poor eyesight and skin cancer.

Constant struggle
The absence of a romantic relationship is not the only situation that Grace deals with. Like other albinos living in Tanzania, staying alive is a challenge. Her greatest fear is the election season. That’s when she gets afraid of traveling. “During the election, people believe that if they kill an albino or get part of the body, they will win,” she says.
Locals say politicians arrange to kill albinos to they can acquire good luck during elections. Rumors claim the limb of an albino person can fetch up to $2,000. “We are refugees because of our skin,” says Josephat Torner, a prominent activist based in Dar es Salaam. He drives a Nissan X-trail with heavily tinted windows to hide his skin from people while he is driving. He says the car protects him, especially when he goes into the rural areas where superstitious beliefs are strong.

The hacking of limbs, raping of albino females and belief in myths surrounding albinism make life for Tanzania’s albinos a constant struggle. “Albinism is a disorder that affects individuals and their families medically, socially and psychologically,” reads a 2006 medical report.
“They never die. Have you seen an albino person die?” asks an elderly man in a village in Tanzania’s Morogoro region. He sits among a group of neighbors who talk about all the stories they’ve heard about albinos. One says he heard albinos bring good luck and if you have one in your home, you will get rich and have good fortune.

Fear
In the lake area along Tanzania’s western border with Zambia, Burundi and the Democratic Republic of Congo, the killing of albinos is highest. Here, fishermen are said to hunt for albinos with an aggression that strikes fear in the hearts of people like Grace. It’s so bad that people with albinism live in protected settlements, while others, like Grace, have left the area altogether.
She is from Sumbawanga in the lake region. Today she is relatively safe. Not because there is no election, but because she now lives in Moshi. It’s a laid-back market town in northern eastern Tanzania where the Kilimanjaro Christian Medical Center has fostered a strong support network for albinos. She works in a laboratory that manufactures Kilisun, the first sunscreen specially formulated for PWAs. She says she feels she is working for a greater good. But memories of her childhood, when her classmates did not want to sit next to her, still bring pain. She says they thought she was not human, more like a spirit or an alien.

Such experiences are not unfamiliar to PWAs in Tanzania. Finding a spouse, completing school, toiling in the sun to farm are all difficult tasks. Grace stopped school at standard seven when she began have problems with her eyes. Later she attended a vocational program to learn cooking. Tanzanian women living with albinism agree with Grace saying that finding someone to love and marry is hard, especially in a place where people they know have been killed for being an albino.

Shamira is not expecting her husband to return. He left her when a skin growth appeared on her face one day and got larger. The growth spread, covering nearly the entire right cheek, pushing down on her lips and the corner of her eye.

The 24-year-old left her home in the Mtwara region earlier this year to go to Dar es Salaam for medical treatment for skin cancer. She is now a patient at the Ocean Road Cancer Institute. Shamira is self-conscious and shy. When she does talk, her voice is barely above a whisper. She turns her body to hide the protruding bulge on the right side of her face. She does not know where she will get the money to pay for her medical needs, nor does she think will ever see her husband again.

Her eyes are blank. She was married for two years, has a five-year-old plus a two-year-old child. She shrugs her shoulders and says, “I do not know why I am albino,“ and when asked if she thinks she is pretty she finally smiles. “God put extra beauty on me,” she says.

The confident matriarch
At 60, Zaida Nsembo is living her life to the fullest. She tosses her head back and laughs saying “he loves me just the way I am” about her husband. He is not an albino. They have been married since 1973 and they have four children. “I am a grandmother,” she says gaily.

Zaida walks with her shoulders back, a lightness in her step and a cheeky grin. She’s a woman with a charm that eases you right away and snaps at you to stop taking so many pictures and stop asking so many questions. Nonetheless, she’s a solid activist and has served as the president of the Tanzania Albino Society for 20 years.

Though she only became acquainted with Shamira this year, she seems protective of her, admitting that it is more difficult for young women with albinism to get married in Tanzania these days, compared to when she was a youth. “When I was growing up it was just a stigma,” she says. “But there was no killing. This came just a few years ago.”

Judicka Lyamboko does not talk much but her body language says a lot. She’s a hardworking professional who is determined not to let the challenges of albinism hinder her. She dropped out of school when her eyesight deteriorated. “I could not see the board in the classroom,” she says.

Now she is a seamstress, and a good one, according to an administrator at the Care Unit For Persons With Albinism in Moshi, Tanzania. She sews elaborate garments from bright printed fabrics. She is not married and says finding someone to love her has not been easy. She admits she does not know if she will ever find a man to love though she is still young, just 28 years old.
She changes the topic. “Some of my colleagues were mutilated,” she says. Those colleagues were also albinos.

Zakkiyah Matimbwa has a cheerful disposition but she’s plagued with deep fears. She does not let her two children go outside without her permission. They both have albinism. Her sister also had albinism and died of skin cancer. Zakkiyah admits to being fearful almost every day. She is afraid of contracting skin cancer, of being attacked, of her children disappearing, of her husband dying. Her husband is an albino and she seems to be enjoying the marriage. But she talks about albinos being killed for rituals.

She protects herself. “I never walk in dangerous places,” she says. That means she does not go to places where she does not know anyone nor does she stay out late. Zakkiyah remembers a colleague who disappeared two years ago. He had albinism. Since his disappearance, her fear has only grown. With her husband, Zakkiyah finds support to make it through what she feels is an unsafe environment.

Janet Anatoli has a gracious elegance. Her face is relaxed and a calmness flows about her. She seems to be at peace with her albinism. She wears a large hat to protect her skin from the sun and she seems to enjoy wearing it. For her it’s a piece of fashion, not a piece of protective gear.

Janet is a performer with a cultural troupe that travels. The troupe is made up of PWAs. Janet sings in Kiswahili and dances showing her slender limbs. She’s married. “My husband is not an albino,” she says. She has three children, none with albinism. But she wants to have an albino child and says albino children need special attention. She’s also an entrepreneur, making bed sheets and pillows. “I want the world to know my dancing skills,” she says.

The long trip home: What it’s like to move back to Africa