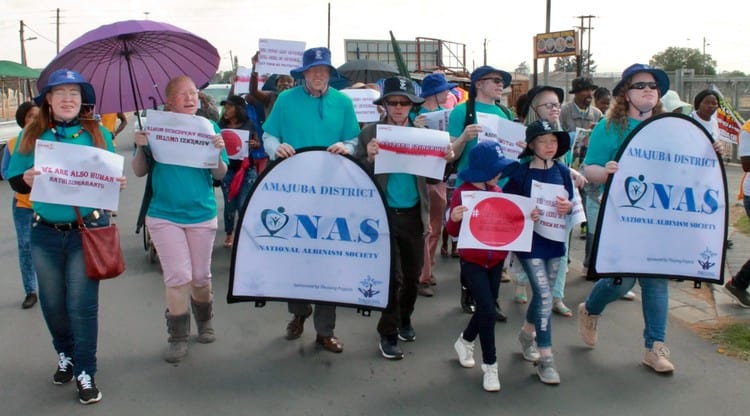 NAS co-ordinator in Amajuba, Smanga Kunene, said the organisation had lost two of its members this year to skin cancer and another was currently ill in hospital. He said sunscreen lotions are now available at state hospitals free of charge for people with albinism who have registered for a skin lotion supply.

“So, we are urging everyone who is living with albinism in our communities to avoid a danger of exposing themselves to this scorching sun especially during this season of the year,” he said.

“Make sure that you wear hats and use sunscreens,” said Kunene.

NAS member Buhle Mofokeng of Osizweni township said she was a cancer survivor. “Luckily, cancer was still at a very early stage in my body, thus it was treated successfully. Now I am feeling well and better.”

She also said: “We face discrimination in the work place, and most of us are still struggling to get jobs despite having proper educational qualifications.” She wanted government to acknowledge albinism in its hiring policies.

Amajuba District Municipality Mayor Dr Musa Ngubane said: “We are prepared to support development programmes, especially those that are aimed to empower members of the community living with disability, including albinism.”

Hezekiel Mokhashana, NAS committee member, said, “We are very disappointed that the traditional healers have not shown up, despite having been invited to this event – aimed at not only making an awareness on skin cancer, but also an awareness on superstitious and false beliefs that lead to killings of people living with albinism, perpetrated by some of the so-called traditional healers for their muthi purposes.”

Related Topics:AlbinismSouth Africa
Up Next