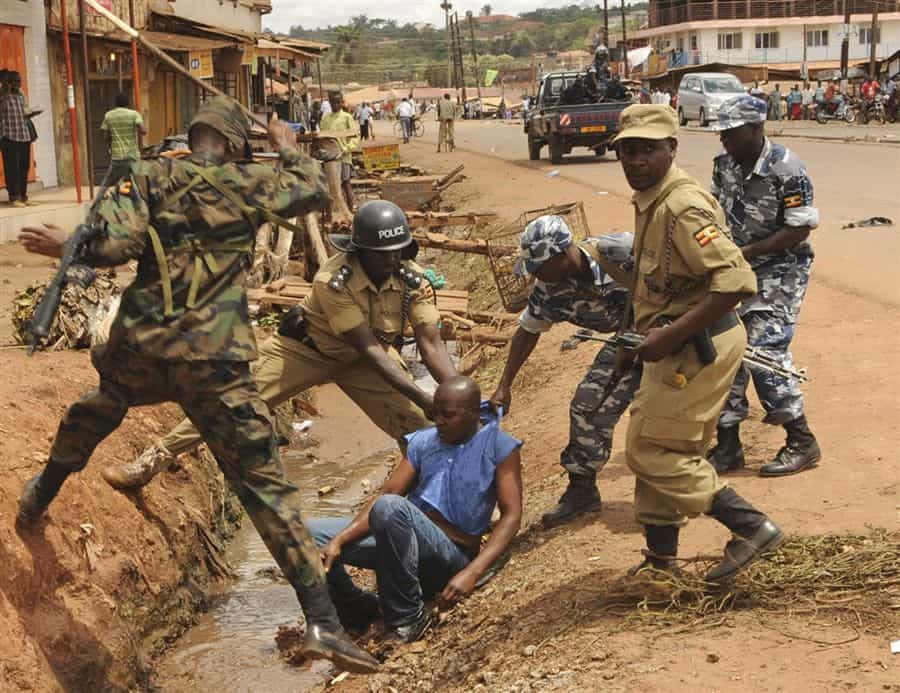 Dr Kizza Besigye Kifefe, one of Uganda’s most prominent opposition leaders and members of his party were attacked by the Ugandan police, the latest assault on the opposition. Besigye, a four-time challenger to President Yoweri Museveni was on his way to an assembly of Forum for Democratic Change (FDC). The police used a water canon to force Dr Besigye out of his car.

In a video which Dr. Besigye posted on his Twitter page, Ugandan police SSP Rashid Agero broke the windscreen of Besigye’s car while another sprayed teargas into the car. The brutality of the Ugandan police is shocking but not new, a characteristic of the brutal manner the police force  deals with activists, opposition groups and citizens in many countries across the continent.

Dr. Besigye was released from Naggalama Police cells and accused of having committed the offence of inciting violence and unlawful assembly. Ugandan MP, Robert Kyagulanyi better known as Bobi Wine, who has also been a recipient of the brutality of the Ugandan police, condemned the “brutal treatment of Dr. Kizza-Besigye by the Uganda Police.” Bibi Wine said, “it is totally unacceptable for political leaders to continue being treated in this manner by the Museveni regime. This impunity has to end. Totally unacceptable.”

The condemnation of the brutality of the Uganda Police comes a year after police brutalised Ssewankambo Hannington, better known as Sweet Pepsi. Ssewankambo was brutally beaten  during “Free Bobi Wine” protests. In a video that’s went viral, BBC photographer Atulinda Allan could be seen bandaging the head of Hannington who passed away on the 31st of October 2019.

This video shows how the military descended on artiste & comrade Sweet Pepsi (Ssewankambo Hannington) and brutalised him last year. A peaceful, harmless citizen battered for gathering to express solidarity with me and our cause! Yesterday, he passed on. Deeply saddened. Rest well pic.twitter.com/vX98w3mDKk

The Ugandan Police has become a tool for suppressing human rights,  including freedom of assembly and attacking ordinary citizens. The recent deployment of 2,000 Uganda police officers into Makerere University, and the police’s use of excessive force was criticised in  a statement by the European Union (EU) in Uganda. The police was deployed to secure more than 1000 lecture rooms in response to students protesting against a 15 per cent increment in school fees.

“Makerere University has been the theatre in recent days of violence and the use of excessive force by members of the law enforcement agencies,” the EU in Uganda statement read. “We are also alarmed at the use of force and unwarranted arrest of journalists attempting to cover recent events at Makerere,” the statement added.

The Uganda Police as a state tool has continued to play a colonial role, one of subjugation and defending the political elite. While the police is charged with protecting and upholding democracy and human rights, unfortunately, security forces not just in Uganda but in many parts of Africa is an extension of the strongman in power, being abused to suppress public dissent.

Local statement on the situation at Makerere University pic.twitter.com/nsp8JlJ6Iw

Video of @PoliceUg SSP Rashid Agero destroying the car screen of President @kizzabesigye1 vehicle with a GUN at, Spear junction, Nakawa.  Agero is the most violent FFU commander & he needs to prosecuted for this heinous & criminal act. Can you imagine?? pic.twitter.com/fFlPCWjCqn