African Crossroads’ third edition, held on December 10th and 11th 2020, was not just an expression but also the embodiment of its crowdsourced theme, “Re-imagining the Pan-African Dream – Reflecting on the past, experiencing the present and imagining the future.” Initiated by Hivos, the event networked participants over new technologies as borders remain largely closed during the  Covid-19 pandemic. Created in 2018, the network now counts an active community of more than 250 delegates from more than 35 African countries. To hear these creatives, academics, activists, digital nomads and community leaders tell it, reimagining the Pan-African dream is taking back a radical idea from the state to the people, connecting youth-driven emancipatory movements, thinking decolonial strategies and finding each other across artificial borders. 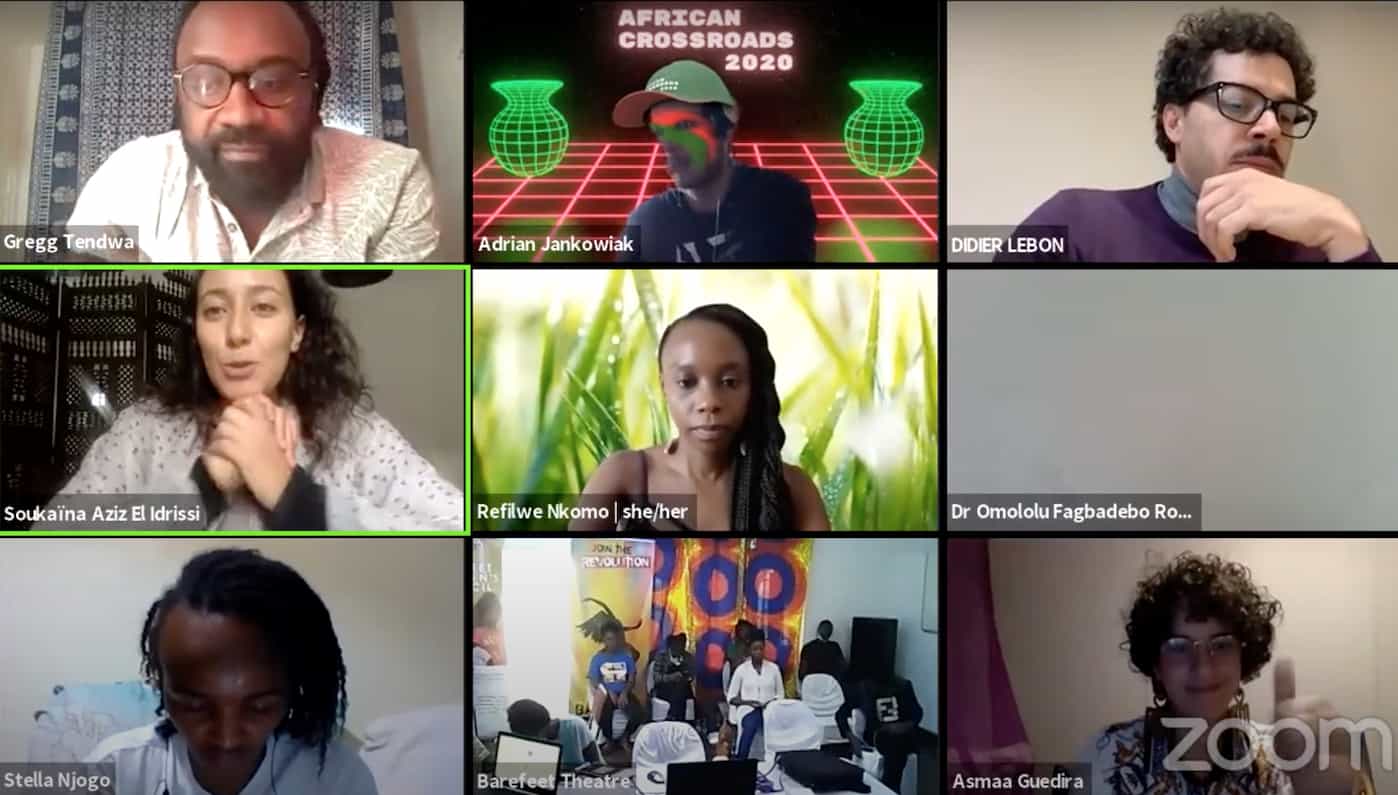 The main room, Forum, featured discussions of the 2020 theme and ended with a recorded performance by guest of honour Zimbabwean Chimurenga music artist Thomas Mapfumo. Sound Exhibition featured an immersive playlist, music from early Pan-Africanist liberation movements and interviews. Live performances by Sandra Suubi and Bengatronics as well as audio from the Kiunga album were featured across the rooms.  Featuring Michel Ongaro, Haddis Alemayehu – better known as HadinQO and other musicians from Ethiopia, Kenya, Morocco and Uganda, Kiunga’s ten tracks were curated during the previous edition of African Crossroads. Participants in the Experience room staged an impromptu drama on Conflict Resolution while the Stories and Workshop rooms featured testimonies about managing hubs, tips on lockdown productivity and wellness games.

Music is the language of the Pan-African resistance

For African Crossroads, music is the official language of the Pan-African resistance. The day-one Forum opened with the panel, “Sonicities of Independence and Healing: African Forum,” moderated by Kiunga album curator Gregg Tendwa, with Suubi, Olusegun Titus, Mhoze Chikowero, Shikoh Kihika and Tushar Hathiramani on the Zoom roundtable. “In thinking of Pan-Africanism, the universality of music can be a coalescing force,” Hathiramani said. “We need to redefine our activism; we need to have a common voice and as Africans. There is something that is so interconnected about our music, our sound that is so alive in every country, that we must define and refine to come up as one voice,” Kihika added. This Afro-immersive idea of music agrees with masinqo rock star HadinQO’s singular pronouncement: “Music is the only language we need.”

Titus told the panel about an ecological protest music scene in the Niger Delta, the degraded site of multinational extraction which contributes the largest share of Nigeria’s revenue. “Egwu su music is a spiritual music, indigenous music in which in the process of singing and kind of performing some rituals, the singers turn to water or river or kind of stone that could not be killed,” Titus said, noting the symbolism of the act to the ecological soundscape.

He also reflected on EndSARS protests which had a heavy role for young Afrobeats artists and spawned protest songs like Burna Boy’s “20 10 20.” The Occupy Nigeria protests also featured performances by popular musicians. “The performance generated different kinds of emotional attachments that brought government onto their feet and because of that they had to change the policy,” Titus said.

Sandra Suubi referred to Uganda’s protest music scene where presidential candidate and hip-hop artist, Bobi Wine, has emerged as a symbol of youthful resistance to illiberal old African dictators like Yoweri Museveni. “What we have now with Bobi Wine as a presidential candidate really was rooted in the fact that people knew him as a musician prior. He called himself the Ghetto President and many times would talk about what was happening to Ugandans in their different environments and sometimes offer a solution through this music,” Suubi said.

Suubi also referred to folk-grounded genres like Kadongo Kamu (one little guitar), where storytelling meets music for people to say what is in their hearts.  “For a long time our different instruments have been used in the context of culture so it’s only recently that they are breaking into different spaces as tools to, I guess, beef up or speak against issues that people are facing.” Other day one themes included the power of storytelling, the joys of technology, and connecting with the past and experiencing the future

Day-two themes included mental health in the creative sector, Afrofuturism, tech development and anti-corruption strategies. For the last two discussions, participants were split into a breakout room that discussed “Redefining African Knowledge for the Future” and an open space which discussed “Truth and Knowledge to Self.” “Who produces knowledge for Africa? Who defines what we learn, what we teach, what we read, what we produce?” Chikowero’s breakout group asked and came around to the observation: “We are defined by other people.”

Barefoot Theatre brought up the question, “Who is African?” to determine how long and wide the Pan-African table is. There is an internal split within Pan-Africanism from the racially inclusive, global ambition of classic Pan-Africanism, to Nas’ open definition of Africanness, “We are all African” (Distant Relatives)/ “We all are black” (King’s Disease), to Black Orientalism’s narrower, colour-themed Pan-Africanism. Perhaps it is not so much about what answers the question as it is about who answers it. According to Chikowero, it is an “important question but let’s make sure that we are not abdicating the right to define ourselves because whoever defines rules.”

The African Music, Power and Being in Colonial Zimbabwe author gave examples of alienating subcategories of knowledge production such as ethnomusicology and ethnophilosophy. “There is musicology which Western Europe and North America; that’s music, everything else is sub. To the degree that if you listen to Mapfumo’s mbira playing today (see report), that mbira instrument has been called by ethnomusicologists a thumb piano. It’s not a piano, it’s not a thumb piano. It’s like calling a piano a finger mbira,” Chikowero’s report extended from his intervention in the day-one Forum. While othering started through coordinated cultural disarmament it continues through “nativised” knowledge production.

Rootless in the world,  home in the body

The open space discussion, “Presence and Truth to Self,” spoke to the search for a fixed belonging. Asmaa Guedira shared the Afropolitan conundrum of belonging to more than one place but not quite belonging to any place. “How do we navigate identities when your connection to the land or two lands is so disrupted or mixed or not very clear? Because you have an adopted land and the one that you see as the motherland, but you don’t really belong, so you are kind of everywhere and nowhere,” she asked. Despite appreciating the exposure that comes with being out there, Asmaa worries about becoming rootless in the process.

Samantha Nengomasha brought up the idea of home as the body. “Home is in my body which means that you can navigate the world in such a way that you are always home. But what does it mean when your body is politicised?” she questioned, giving gender, race age or impairment as examples.  “Home is expansive. It also has room for us to evolve and as we grow we should change and learn different things for that home to also change but at the same time needs to be a place that is deeply comforting.”

The idea of the body as home, that is, a site of defence mechanism concurred with Chikowero’s statement from the previous day that African bodies became shock absorbers to the existing paradigm. “Home is a shock absorber and if you kind of draw that as a parallel to your geographical home, I guess that’s what is supposed to do,” Soukaïna Aziz El Idrissi noted. “But when, all of a sudden, your body is supposed to be the shock absorber, it messes with you; it stops you in your tracks.

“You are constantly stopping and reevaluating yourself but you are moving at a tiny, tiny, ridiculously small rate, while the rest of the world is just zooming past because they are not being politicised, bombarded by false narratives or borders or what not,” she reflected.

To Ebenezer Ajayi the body that is the shock absorber is an agent of intergenerational trauma. “If the body becomes the shock absorber, we end up creating so much memories which cannot be forgotten and most of the time we even translate or transfer them genetically to our children, to the generations coming,” he said. Responding to Ebenezer’s suggestion that decolonisation is a waste of time because it reproduces trauma instead of running with new identities, Soukaïna said individuals needed to embrace themselves and live but structures definitely needed to be decolonised.

Creating through a pandemic

Crossroaders such as Soukaïna, Ebenezer and Michel Ongaro shared stories about being forced to stay longer in countries they were visiting because of the Covid-19 lockdown. Sometimes lamenting lack of support from their countries and embassies, they, nevertheless, relished collaborations, lessons and support from nations they were caught up in. Benga artist Kenya’s Ongaro has maintained his vibe in Uganda where he has been locked down for months.

Ongaro whose music borrows largely from his rich African heritage played among others “Herufi za Hekima,” and “Watu Wamoja,” songs about wisdom, friendship and unity respectively for the second day of the Forum. Singer and visual artist Sandra Suubi sang courage and progress in her environment-themed wardrobe, while headliner Thomas Mapfumo performed liberation classics mostly drawn from 1970s and 1980s and gave a wide-ranging interview on music and politics

Other Crossroaders adapted and became more productive during national lockdowns. The Stories room featured innovations as well as wellness strategies to avoid burnout. Barefeet Theatre, which takes at-risk young people from the streets, involves them in artistic production and reintegrates them into society, gave out more than 40 thousand face masks, made face shields for health workers and taught communities to create their own masks during lockdown.

African Crossroads seeks to “create a space, physical and virtual, collective and individual, for collaboration, collective intelligence, united actions and inspiration to positively shape the future of African societies.” The first two editions, held in 2018 and 2019, showcased collaborations and projects including podcast-making in Tunis’ Medina, sound archiving in Morocco, re-valuing crops in Sierra Leone and Tunisia, and data privacy workshops for Ugandan activists.  Looking forward, there is still more work to be done to build together and collaborate to “positively shape the future of African societies.” Despite the various disruptions and challenges of 2020,  future editions will certainly build on the inspiration and successes of the 2020 African Crossroads hybrid event.

You can watch or rewatch what happened in the different sessions on African Crossroads Youtube channel and find more information on the program on www.africancrossroads.org.