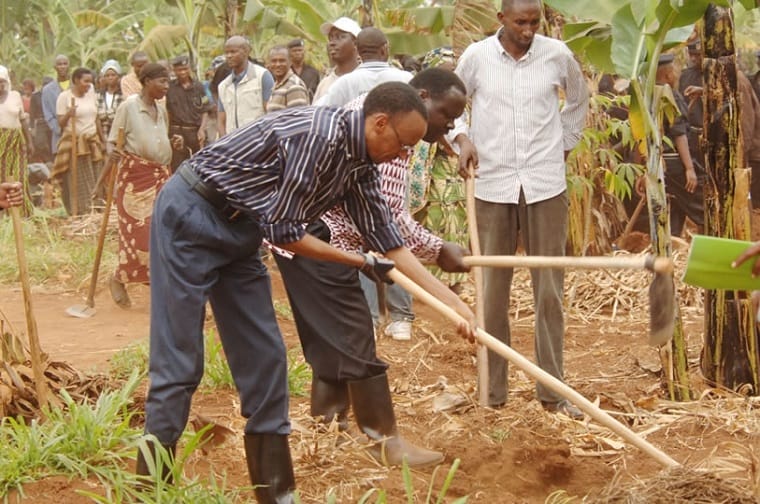 The word Umuganda in Kinyarwanda can be translated as ‘coming together in common purpose to achieve an outcome for the benefit of a person, society or nation’. In traditional Rwandan culture, members of the community would call upon their family, friends and neighbours to help them complete a various tasks, such as building a house, bridge, roads, schools, churches amongst other projects.

Today in Rwanda, as part of Umuganda, communal work usually done on the last Saturday of each month, and communities come together to do a variety of public works, which includes infrastructural development and environmental protection.

Rwanda, rising from effects of the 1994 Genocide, in which thousands were killed and displaced has witnessed a growing economy, improving peoples’ livelihoods and promoting a culture of togetherness. Umuganda has been used as part of the efforts to reconstruct Rwanda and nurture a shared national identity.

Women take a rest after a long day of work during Umuganda. Photo by Fred Obera

“Our country was once known for its tragic history. Today, Rwanda is proud to be known for its transformation. When your achievements are a result of hard work, you must be determined to never slide back to where you once were” said President Paul Kagame praising the culture during the Umuganda day in Kigali, Rwanda.

Several government ministries and department participate in the initiative and various interest groups as well as citizens have been involved in several successful infrastructural projects such as the construction of medical centres, schools, roads, and houses, cleaning of streets, and markets, and other activities. Various expatriates and diplomats have also participated in the projects.

In Rwanda the people have made towns, and communities clean as compared to other countries in Africa. The city of Kigali will surprise any visitors, a clean and smart city in contrast to other African major cities such as, Lagos, Nairobi, Harare, because of the concept of the Umuganda.

“The Umuganda Concept is not new, it has always been part of the Rwandan society, President Kagame did not come up with a new concept, he simply revived a traditional practice when he saw the overwhelming need to bring a country that had been destroyed by the Genocide back to prosperity” Said Willy Mugenzi, a Rwandan communications expert working with the East Africa Community in Kisumu, Kenya.

During the Umuganda day – streets are empty, the public transport and human traffic stops, streets are deserted, shops are closed and you’ll hardly find any vehicles or pedestrians. Communities gather together to work on various job, construction, cleaning, digging of drainages, ditches and trenches, anywhere there is a need, there are eager helping hands doing their part to make Rwanda better. The work normally starts from 7.00AM to 11.00PM and then people get back to their business.

Keeping with the environmental laws

In Rwanda, littering is considered illegal, plastic bags which are a menace to the environment in countries such as Kenya are illegal and are confiscated at the borders.  In the capital city Kigali it is a pride, a patriotic duty and Umuganda Day that keeps the city and country clean.

As President Kagame said “Kigali does not need International Aid to Keep its backyard clean, it needs its own users, let’s make it clean’

Related Topics:Culture Rwanda
Up Next

Abortion is not going away, no matter how much you gag it