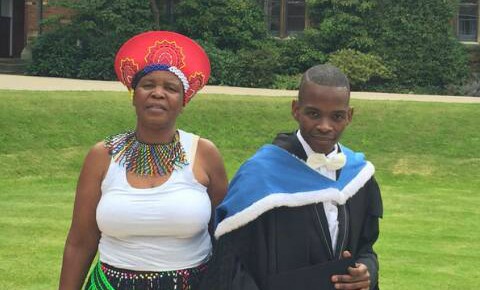 Ntokozo Qwabe is only 24 years old. That’s kind of hard to believe considering his accomplishments.

That feat he accomplished after having been, in his first year, forced to drop out of school and work as a cashier at a supermarket to save money for his tuition fees. Coming from a family of 13 children who were all dependent on the income that his father earned as a a caretaker at a high school.

Ntokozo Qwabe holds up his certificates of achievement after graduating at the University of Kwazulu-Natal. Photo: UKZNdabaOnline

For his graduation ceremony last week, Qwabe invited his mother, Nomali Qwabe, to attend. The flight to England was his mother’s first trip in a plane. He explained to the Independent how his mother’s sacrifices gave him a headstart.

“I cannot even begin to express how happy I am that she was part of this moment. Growing up at Oyaya, in rural Eshowe, I know how hard she worked day in and day out… selling biscuits, snacks and sweets to the primary school kids so we could survive and grow like other kids,” he said.

“Her dedication and sacrifice outweighs mine by a mile – and that is why I have made this entire moment about her. Also, she stole the show at Oxford dressed in traditional Zulu attire.”

Qwabe, who is one of the founders of the #RhodesMustFall campaign in Oxford, is vocal about the educational and social challenges facing a majority of South Africa’s young people.

Ntokozo Qwabe at his graduation at UKZN. Photo: UKZNdaba Online

“It makes the victory sweeter because of its potential to inspire many others who have lost hope in the country. Because of our history, and our current state of affairs as a country, a lot of young people are disgruntled and have lost hope,” he said.

“Structural injustices caused by exclusion from opportunities continue in the country for many young people – especially black people. I think my story can serve as a positive tool to show that it is possible to triumph over all adversities.”

Qwabe intends on pursuing a second Masters degree at Oxford next year, this time in Public Policy.