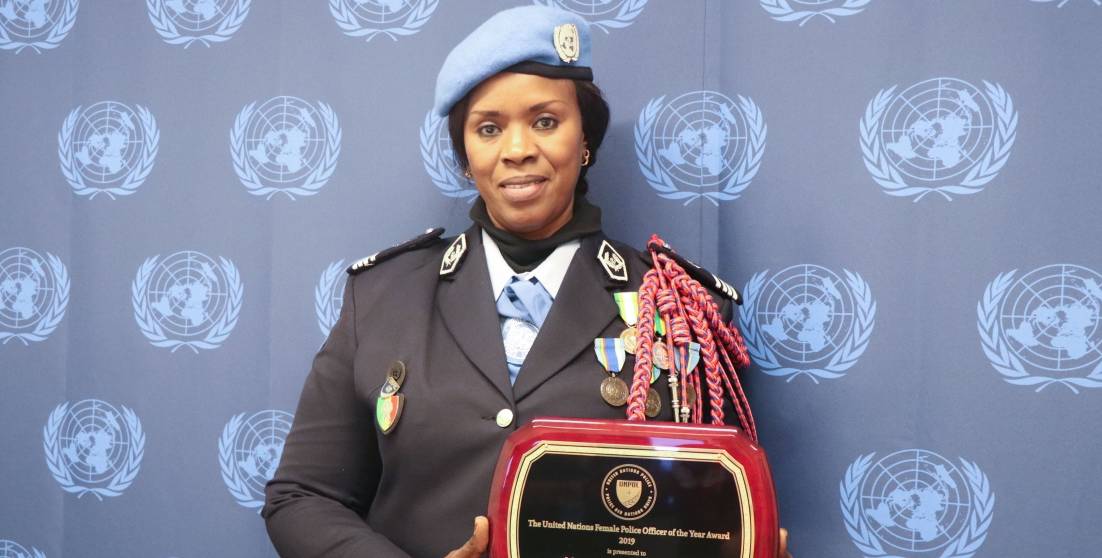 The United Nations Female Police Officer of the Year award was established in 2011 to recognize exceptional contributions of female police officers to UN peacekeeping and to promote the empowerment of women.

The award typically goes to an officer who has distinguished herself, through her exemplary conduct performance and outstanding achievements, and has had a significant impact within her area of responsibility on mandated policing tasks.

Some of the recipients of the award thus far have included; Ghanaian police officer Phyllis Osei (2018), Assistant Inspector of Police Annah Chota from Zimbabwe (2017) and Police Superintendent Yvette Boni Zombre from Burkina Faso (2016).

Major Seynabou Diouf of the Senegal National Police was selected as the 2019 United Nations Female Police Officer of the Year for her, “exemplary service, which has a direct and positive impact on the community and the Congolese national police.”

According to her profile, Major Diouf currently leads a task force that helps to prevent and end sexual exploitation and abuse with the UN Organization Stabilization Mission in the DRC (MONUSCO) in Goma (North Kivu). She also leads the UN Policewomen’s Network, which connects female officers for mentoring, training, professional development and mutual support.

Major Diouf was selected out of 30 nominations from eight missions, and received her award during the 14th United Nations Police Week, which included heads of UN police components and police experts from 14 peacekeeping operations, special political missions and regional offices.

In response to the commendation, Major Diouf said, “It is a deep honour to receive the UN Female Police Officer of the Year award. It means a lot to me.  Preventing sexual exploitation and abuse is a priority for me and my team and for my mission. And I believe that our efforts are paying off. For example, not a single allegation has been recorded against MONUSCO police this year.  But we can always do more—even one allegation is one too many.  We need to continue doing everything we can to ensure that this number remains at zero and victims of abuse receive the support they deserve.”

She told those in attendance that, “When I was young, I wanted to be a medical doctor but there was an urgent need to help support my family. Being a police officer in the early years of female recruitment provided recognition and a decent salary, but it also allowed me to contribute to society in ways I had never thought possible”.

She added that the award makes her feel “motivated to do more” and that she will continue “to promote women’s rights, speak out against sexual and gender-based violence, and fight marginalization and discriminatory customary and religious practices targeted at women and girls”.

Giving her a glowing endorsement, United Nations Police Adviser Luis Carrilho said in a statement on the organisations website that, “Through her work… Major Diouf embodies the spirit of the award and the core values of the Organization. She is an inspiration to all of us.”

He congratulated Major Diouf “for her outstanding service” to the UN Nations and Congolese people and stated that “all UN police officers in the field and at the UN Headquarters are inspired” by her example to uphold the core values of the Organization.

Top UN Police Adviser, Luis Carrilho, spoke about Major Diouf’s experience saying, “Since early in her career, she has shown her determination to make the extra effort, go the extra mile, to achieve her goals”, he spelled out, flagging that as the team leader of an SEA task force in Goma and president of the UNPOL Women’s Network, “she has demonstrated her commitment to giving women a voice and putting an end to SEA”.