An African tragedy at the heart of Soyinka’s satire 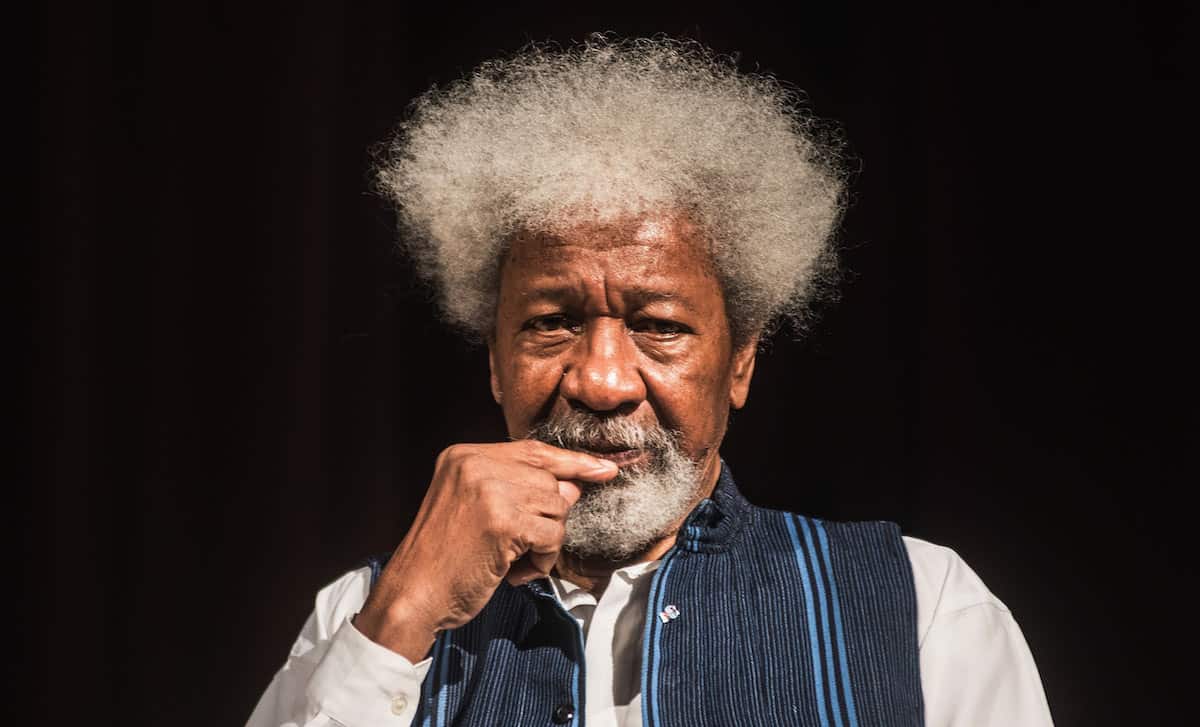 This year, Nobel laureate Wole Soyinka published his first novel in 48 years, Chronicles From the Land of the Happiest People on Earth. His previous novels were The Interpreters (1965) and Season of Anomy (1973). Fiction is not Soyinka’s most favoured medium. He is a dramatist first, as well as being a poet, essayist and memoirist in a career whose creative energies have never waned.

But the fact that it has taken him half a century to return to the novel, specifically, creates an irresistible opportunity to compare and contrast two quite different literary and historical moments in the context of a single (and a singular) oeuvre.

Of course, this is what critics do: we look for opportunities, the coins scattered from the purses of the people with genuinely creative talent. This novel, however, gives nothing away for free. The reviews are mixed, not because of any perceived slackening of Soyinka’s ferociously challenging writing, but because, apparently, the book is too long, dilatory and difficult. There is no admission from those who strike this note that the fault might lie with them. It is surely our task as reviewers and critics to take the work on its own terms.

If there is a question of scale, then we should take the measure of that too. Why does Soyinka’s subject need such expansive treatment?

Soyinka’s early fiction sought to anchor the day-to-day lives of his characters in the cultural matrix of what he called “the African world”. As his essays show, that matrix was defined mainly in terms of Yoruba mythology, but the emphasis was not exclusive. In fact, he was just as likely to draw on Shakespeare and classical European sources as the adventures of the Yoruba deities.

The existential and psychic drama being played out, whether on the page or on the stage, had to be grounded in an underlying matrix that gives meaning to experience, one in which the living, the dead and the unborn are thrown together in time and space.

This helps to explain the curious title of the first novel, The Interpreters. It is not about a class of clerical functionaries who mediate communication among people speaking different languages. It is about a group of young Nigerian professionals, “been-to’s” in the language of the 1960s, who have returned from studies in Europe to establish themselves in their newly independent country. Their fortunes are mixed, for various reasons: the corruption of the ruling elite places obstacles in their path at every turn, but equally, their personal challenges are far from straightforward.

The artist in the group, Kola, is painting a large canvas depicting the birth of the Yoruba pantheon of gods, using his friends as models. A process of coming into being, understood in mythic terms, underlies the interpreters’ search for identity and relevance.

Season of Anomy is a very different novel, but the point of departure is similar. One way of reading it would be to see it as a transitional novel in which Soyinka is in search of a mythic structure that is still capable of addressing the political and moral failures that emerged in the Biafran War.

Another explanation is suggested by a luminous remark in Soyinka’s prison memoir of the same period, The Man Died (1972), to the effect that “history is too full of failed Prometheans bathing their wounded spirits in the tragic stream”. The Nigerian critic Dan Izevbaye suggests that Egbo, Kola and the journalist Sagoe in The Interpretersare indeed “failed Prometheans” and that, by the 1970s, after the war, the figure of Orpheus – the survivor, the lute player and artist, at odds with society – had become more representative of Soyinka’s authorship.

The truth or otherwise of these speculations will have to remain locked away in the strongroom of Soyinka’s creativity. But they point to a wider issue, which is the “postcolonial reason” of my title.

What is postcolonial reason? I will spare the reader a history of philosophical reflections on the Enlightenment and its legacies, or the history of Western rationality and its roles in the colonial enterprise. To explore them here would be a distraction from the task of understanding what Soyinka means by the African world.

Specifically, he speaks of “an attitude of philosophical accommodation” that absorbs foreign matter into the “social armoury” of a society’s struggle for existence. The African world is intact because it is adaptive, absorbing into itself the rationality and technology of colonial modernity.

Following Soyinka’s lead, academic and poet Harry Garuba speaks of“the re-enchantment of the world”. He refers to what Max Weber, following Friedrich Schiller, called “disenchantment” in the West. The baseline position is that Europe has undergone ever-increasing degrees of secular rationalisation following the rise of capitalism and the industrial revolution. By contrast, an animist consciousness, says Garuba, in which the material world is infused with spirituality, continues to influence social morality in postcolonial Africa.

Fast forward 27 years from Season of Anomy to 1999. Soyinka was in Cape Town to deliver the annual T.B. Davie Academic Freedom Lecture. Not remarked at the time, it was an encounter between different versions, and moments, in the narrative of African postcoloniality. In South Africa, then president Thabo Mbeki had floated (and was funding) an African Renaissance.

With exquisite circumspection, Soyinka took this as his provocation. Since the situation in many postcolonial states had “beggared the imagination” of even those who had made the “direst predictions”, it was surprising to hear “that the African continent is actually on the verge of a renaissance”.

Soyinka’s stocktaking was a devastating indictment. Biafra had set postcolonial Africa on course for a series of withering civil wars: Angola, Congo, Rwanda, Algeria, Sudan, Liberia, Sierra Leone. Each of these wars was marked by atrocity on a massive scale. The argument is poignant, given the aesthetics I have sketched out: What traditional, organic resources are still accessible to poets after nearly half a century of independence?

In all the destruction, he concluded, he could not hear “the annunciation of a renaissance, nor read the first flickers of its regenerating fires on our ever-receding horizons”.

The Cape Town lecture set a different tone, consistent with later interventions. If a novel was to follow, what version of the African world could now be mobilised? In the 1970s, Soyinka had spoken of the need for artistic “self-apprehension” – an essential task if the “metaphysical void” created by the denial of African humanity in the long years of colonial rule were to be filled. But what form would self-apprehension take in this new world of material, ethical and human destruction?

Soyinka had always been a satirist: the answer that Chronicles gives to this question is that he has moved satire, rather than myth, to the centre of the project. The novel’s scale is commensurate with the task: to diagnose and bring to the light of day an unimaginable spiritual corruption. In anglophone African writing, Chronicles is the work closest to the despair of a Jonathan Swift who, in A Modest Proposal, suggested that a solution to Irish poverty would be for Irish babies to be served up on English dinner tables.

What explains the paradoxical shift from a strong account of the importance of the mythological and the spiritual to a scathing attack on religion? The answer is that into Soyinka’s “metaphysical void” have stepped the fake evangelists and Pentecostalist preachers of the prosperity cults who have learned to manipulate and fine-tune the very animist sensibility that Garuba describes. Their accomplices are the politicians who milk the state for every penny, and a class of wealthy collaborators whose appetite for material goods knows no bounds. It is the god of Mammon that is venerated, otherwise known as consumer capitalism.

In part, Chronicles takes off from The Interpreters in following a group of young professionals, who meet as students in the United Kingdom, into late middle age and the height of their careers. Duyole Pitan-Payne is an engineer who dies in Salzburg on his way to a United Nations appointment; Kighare Menka is a surgeon known for his work on mutilated victims of Boko Haram; Prince Badetona is a statistician who walks a thin line between corporate finance and money laundering; and Teribogo, a university drop-out (he returns from his studies in righteous indignation, having been accused of rape) fakes his qualifications, drifts into the film industry and finally becomes an evangelist called Papa Davina, proselytising for a new religion he calls Chrislam.

In one sense the novel is all about perspective, since the title refers to an actual 2011 Gallup Poll that placed Nigeria top in its annual happiness index. As was the case with Mbeki’s African Renaissance, Soyinka took up the provocation.

By the end of the novel, the hazards of professional life in Nigeria leave three of the characters damaged, and one dead. Teribogo rises to the top because he is more capable than the others of keeping on the right side of power and playing a venal game.

Just how venal the game is becomes apparent in the closing chapters. Menka, the surgeon, endures a mysterious but menacing attempt to recruit him into a secret organisation with connections to the national leadership. It turns out, in implications gradually revealed, that this organisation is Human Resources, which is running a lively trade in human body parts to be used in traditional medicine.

While loosely based on an actual episode at the Okija Shrine in Anambra state in 2004, where dozens of bodies were discovered in a condition that implied that they had been used for medicinal purposes, and where senior politicians were found to have taken oaths, the trade in Chronicles is used as a satirical device which, in its scale, is as disturbing and implausible as Swift’s recommendation of cannibalism as a solution to the Irish problem. As the novel approaches its conclusion, it uses plot devices more familiar in the political thriller than satire, but the effect is no less shocking.

The point is that Soyinka is summoning all the rhetorical power he can to cauterise the psychospiritual wound.

Chronicles From the Land of the Happiest People on Earth is satire, political thriller and, finally, in its darkest register, tragedy. It is the work of a great writer who is entitled to a deep sense of fulfilment, rootedness and belonging; instead, in the words of Milan Kundera, he must feel as if his testament has been betrayed. As Pitan-Payne says in Chronicles, reflecting on the history of black struggles elsewhere: “This is different. This, let me confess, reaches into … a word I would rather avoid but can’t – soul. It challenges the collective notion of soul. Something is broken. Beyond race. Outside colour or history. Something has cracked. Can’t be put back together.”

This article was first published by The Conversation.