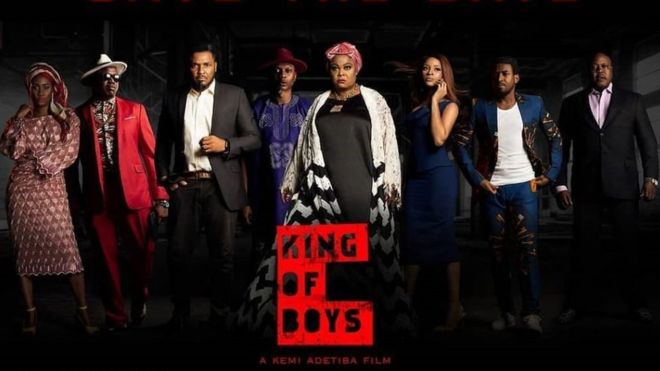 When Netflix acquired the worldwide rights to Genevieve Nnaji’s film Lionheart, it made headlines all over the world. It was a historic moment for film on the continent. Other films from the continent, mostly Nigerian productions, have also found their way on Netflix, the latest being King of Boys directed by Kemi Adetiba, a well-known music video director.

The film takes an interesting view of  Nigerian politics, the streets of Lagos and how power, in its raw form is used as a weapon, both for suppression and elevation in Nigeria.

King of Boys opens with a party; colourful aso ebis and dances, hallmarks of these parties, which come with jollof rice, amala and all sorts of local delicacies. Adetiba makes no mistake in showing this side of Lagos, where the success of the party is hinged on food and music. The music is not the usual Afrobeats that the world associates with Nigeria. For a proper Yoruba party which involves a gentle shaking of the body with a swag, fuji music by King Wasiu Ayinde, popularly known as KWAM 1 is your ideal.

We quickly get to know why this party is taking place, it is the birthday of Eniola Salami (Sola Sobowale), a woman who has made inroads into the power structure of Lagos. The Governor is in attendance, as are other powerful political office bearers, including  a Justice and Senators too. On her birthday, Eniola leaves to handle a case that changes her mood. At the back of her house, a man has been beaten, dripping with blood, Eniola asks him to name his bosses. She asks the man if he’s been served food and feigns anger at how poorly he’s been treated. The situation take an unexpected turn when Eniola then takes a hammer and gives the man the last blow on his head. She then ask her thugs, after witnessing her kill the man, what they would want to eat, an indication of her ruthlessness and coldness. They are dumbfounded. We are meant to understand that Eniola knows and controls the streets and her brutality is something we should expect to see.

Eniola has two children, a son and daughter, her daughter is the closest to her. Think of The Godfather, but this time without the inflections of Don Corleone. What Adetiba portrays is something similar; the long queue of people who come to Eniola for help, the woman who comes complaining about how she was insulted by the man who impregnated her daughter – to which Eniola asks if she wants the man dead in seven days or she wants a wedding. Then there’s the sharing of money to those on the queue.

With flashbacks into Eniola’s youth, a role aptly played by Toni Tones, we get to understand how her character was formed, what made her who she is, and how she got to be the head of a gang. “Nothing moves in Lagos without Eniola knowing,” is the mantra. Her cut is a consistent 40 per cent. But trouble starts when a younger member of the gang, Makanaki (Remilekun Safaru), who no longer sees Eniola as a threat, confronts her and demands to take the crown. This is after Makanaki has come across millions of dollars of looted funds hidden by politicians in their homes.

The ensuing gang rivalry leads to Eniola losing her two children, and getting arrested by the NCCC, the equivalent of Nigeria’s Economic and Financial Crimes Commission (EFCC) after she steps on the toes of certain godfathers in Lagos. Beyond being the head of a gang, Eniola also wants to be a minister, but her image doesn’t sit well with party members. Seeing her as a threat, killing her is the way out since they are done with her.

King of Boys does not just show the extent of corruption and the failure of officers of the anti-corruption commission in fighting this menace, it mirrors that statement that runs governments, especially on the continent, “Orders from above”. It is this “order from above” that frustrates Gobir, an officer with NCCC who discovers that his boss – who eventually commits suicide – is in cahoots with corrupt politicians.

Read: Ethiopia submits film in Amharic Running Against the Wind, for Oscars 2020

This is Nigeria, this is politics in Nigeria, nothing changes. No procedures are taken seriously. The government is taken lightly and in a distrustful manner. You see no collective agenda to bring about change to the people. King of Boys, if it did anything so well, is to show how the Nigerian political circle operates. And the sham of Nigerian democracy.

Nigerian film critic Oris Aigbokhaevblo stated, “It is immensely gratifying to see a Nollywood director take on a project as ambitious as this, in duration, in scope, and at some depth. If ultimately Adetiba has failed to make a classic movie out of a material with that potential, she has at the minimum made a very rewarding one out of a near three-hour narrative”.