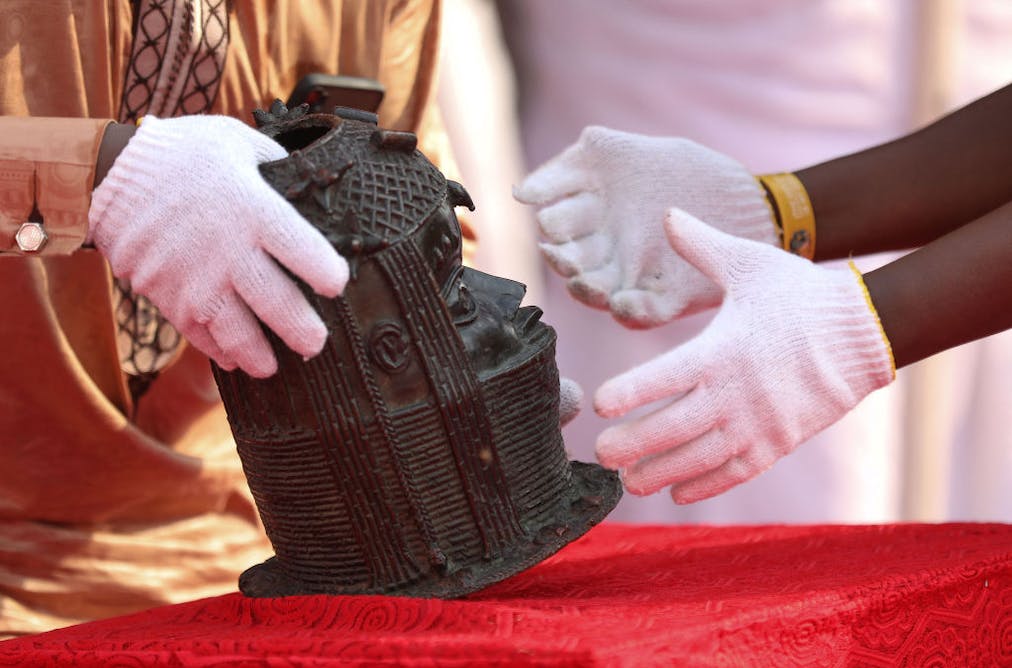 The violence of the past is far from over. But it is disguised in many ways, made invisible and normalised. What started with the Spanish, Portuguese or the Ottoman empires continued with the British, French and Russian empires, and now the United States. Imperial political violence continues today in Palestine, Ukraine, Sudan, Yemen, Iran, to name but a few.

One of the disguises is “restitution”.

I’m a scholar of what I understand as catastrophic art – artworks which were made in worlds that empires destroyed, and were then taken to the imperial centres, or metropoles.

When talking about returning these artworks, the former imperial states speak of “restitution”. Restitution is taken to mean the return of “objects” to their homes or places of origin. It is confined to individual works of art, and human remains, that were brutally deported and displayed in museums or subjected to laboratory research. It includes animals too. These were hunted and taken to satisfy the interest of imperial science, museums and zoos.

But the language of restitution fails to take into account historical responsibilities.

As I discuss in a recent paper on catastrophic art, restitution fails to note that taking “objects” from Africa went hand-in-hand with the murder or destruction of knowledges in the continent. It thus eliminated the possibility for future knowledge practice and circulation.

Restitution ignores the annihilation of life forms – of social, political, ecological and epistemological organisation – that was perpetrated in Africa by the empires.

I have been working on understanding the British colonial destruction of the Kingdom of Benin in 1897. The destruction was an imperial response to Oba (king) Ovonramwen Nogbaisi’s refusal to submit to control by imperial legislation. The kingdom was first made to disappear in a great fire and then turned into a British colony with a “native council”.

The British empire had already destroyed the Ashanti Kingdom (in 1874) in what is today Ghana and the German empire had destroyed Cameroon in West Africa (in 1884). At the Berlin Conference of 1884–85, representatives of predatory empires met and divided the continent of Africa between them into areas over which they would have sole rights.

The French destruction of the Kingdom of Dahomey in 1892–94 followed.

The political violence of these empires was driven by what they termed a “civilising mission”. This meant conquest of land. And that meant the annihilation of life forms. It destroyed different knowledges and was followed by the extraction of artworks and human remains. Colonial ethnologists and ethnographers had the power to treat destroyed knowledges as “objects” or “artefacts”.

The murder of knowledges

As imperialists, they could create theories to prove that plundered knowledges were nothing more than objects. They stripped from these knowledge systems their ability to transmit knowledge.

In the Kingdom of Benin, art was never seen as art alone, but a system of knowledge that shaped life. The critical thinker, poet and Senegal’s first president, Léopold Sédar Senghor, wrote of African art as “social life, goodness, beauty, happiness, and the ‘knowledge of the world’”.

By denying that the artworks carried knowledge they brought with them, the colonial ethnologist or anthropologist could make scientific knowledge claims about these “objects”.

But the colonialist system of classification, categorisation and hierarchy denied the fact that the artworks carried knowledge they brought with them. This process destroyed the ability and right of an artwork to speak of life forms.

The “objects” were then put on display and turned into spectacles to entertain the masses, or “sleeping beauties”, as the philosopher Frantz Fanon put it in The Wretched of the Earth.

The empires used spectacle to institute imperial citizenship and to justify violence and destruction in the colonies.

To this day, the Louvre in Paris, the British Museum in London and the Humboldt Forum in Berlin continue to lay legal claim to, and to display, “objects” from Benin, Dahomey and Cameroon. The undisturbed display prevents any thinking of the “objects” as the colonial murder of knowledges.

A call for historical responsibility

States and museums see themselves under no historical, political or ethical obligation even to inquire into their colonial histories of murdering knowledge.

Quite the opposite. The language of restitution and provenance is a “new” spectacle, a way of remembering colonialism and writing colonial history. Restitution is declared and controlled in the metropoles and governed by museums, provenance researchers, archives and curators there.

In fact, the rhetoric of restitution celebrates colonialism and imperial relations of power.

In a speech at the University of Ouagadougou in Burkina Faso on 28 November 2017, President Emmanuel Macron of France declared that “African heritage must be showcased in Paris but also in Dakar, Lagos and Cotonou; this will be one of my priorities. Within five years I want the conditions to exist for temporary or permanent returns of African heritage to Africa.”

A similar approach was taken in a presidential report on restitution that Macron commissioned.

The rhetoric of restitution also unfolded in Germany and Britain, demonstrating that the imperial will to know is the will to dominate.