The geometry of grief
Advertisement 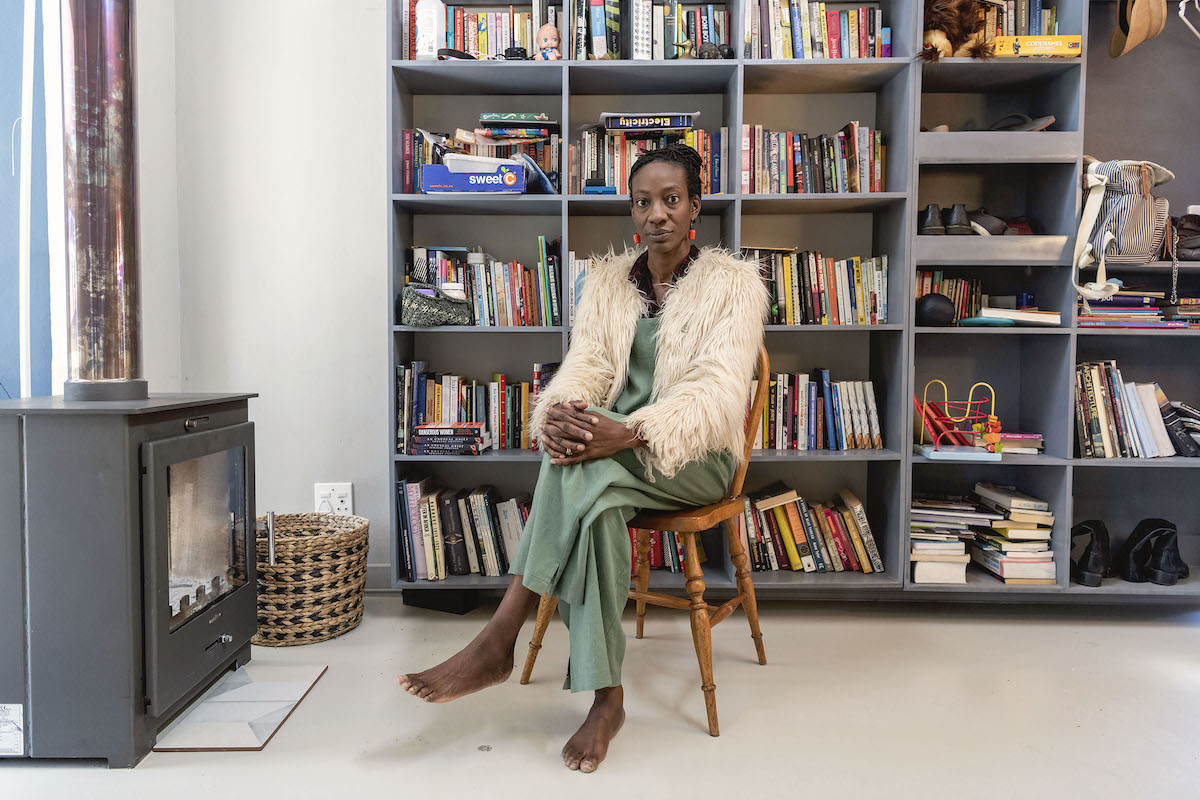 In Yewande Omotoso’s third novel, An Unusual Grief (Cassava Republic, 2021), a Nigerian immigrant in late middle age leaves her husband to travel from Cape Town to Johannesburg. Her project, it transpires, is to snoop on her daughter. But this is no typical marital break-up, and no typical exercise of maternal nosiness: the daughter, Yinka, has committed suicide, and her mother, Mojisola, is desperately trying to resolve her shock and self-reproach. In order to mourn Yinka properly, Mojisola craves a sense of how she lived – and why she decided to stop.

If that premise suggests a gloomy book, think again. Omotoso is a taut and witty storyteller and Mojisola’s curiosity leads her to surprising places, both in Yinka’s milieu and within herself. Grief is not the monolith of sorrow that we tend to expect. It is “dynamic” and “unruly”, according to Omotoso – as is the Johannesburg that Mojisola discovers.

Or, to be more accurate, the Midrand that she discovers. It’s a place far from the lurid African Gotham of Joburg’s accreted fictional presence, which seems to consist entirely of ghettos and palatial opulence. The action of An Unusual Grief plays out in the sprawling, humdrum space between: on the face-brick savannahs of middle-class atomisation, from Midrand to Edenvale to Randpark Ridge, teeming with townhouse estates for “normal” people – who tend to lead “abnormal” inner lives, as Mojisola comes to realise.

Of cities and signifiers

In an interview with Omotoso, Johannesburg Review of Books editor Jennifer Malec joked that An Unusual Grief might be “the first great Midrand novel” – and Omotoso laughs when I mention this.

“Creatively, I’m interested in restraint,” she says, “and in finding unusual ways to capture the small-t ‘truth’ about something. So I like the idea that the novel’s setting is in Joburg, but it’s not Joburg – the conceit of Joburg, using the typical signifiers. I do feel that Midrand hasn’t been fully milked in the novel, though. There is so much more in Midrand.”

Omotoso knows very well how to read cities and their signifiers, having studied architecture at the University of Cape Town (UCT) and worked as an architect. It was far from her first choice of career – she had wanted to be a writer ever since she arrived in Cape Town from Ife, Nigeria, as a 12-year-old, with her family.

“Being made strange to myself at age 12, when all you want to do is to be familiar, to belong, that placed in me a recurring preoccupation in my writing: the idea of belonging in all its guises,” she says. “When you are strange, you look very carefully at everything. I didn’t have the luxury of comfort; I had to be on guard. It’s not necessarily pleasant, but I guess one result is that you are keen and able to observe.”

A plan for freedom

But by the time she finished school, her father, the renowned Nigerian author and literary scholar Kole Omotoso (also the “Yebo, gogo!” actor in the famous Vodacom television adverts) declined to bankroll the fees for a literature degree. He knew the pitfalls of living by the sweat of your pen.

“He was like, ‘Mm-mm! This isn’t going to happen.’ My teachers looked at my marks and said, ‘Well, she has a bit of this and that.’ So they all conferenced and decided architecture would have some creativity in it, but was also technical, and my results pointed in that direction.”

Omotoso would need to be pragmatic to beat this pragmatism. She set about gradually buying her passage to a writing life, at first by using her architect’s salary to pay the fees to write her first novel, Bomboy (2011), as part of a master’s degree in creative writing.

“I didn’t love architecture for many years,” she says. “I hated it. I hated the school. This was the end of the 1990s and UCT was pretty interesting back then. The department was difficult; it was run by white men, and with hindsight it was a difficult place to be as a Black woman. But it was the water we swam in. I couldn’t name it for a long time. We were just unhappy, and confused – fairly intelligent students performing badly. We weren’t at home and we weren’t received.”

She hastens to add that several lecturers eased this sense of systemic alienation – notably the writer and architect Lesley Lokko, who has just founded the African Futures Institute in Ghana. “She made a huge difference to me and others like me.”

And Omotoso does feel that architecture has helped her writing – by instilling an urge towards the unity of concept and form. “In architecture, the preoccupation is with this kernel of an idea that is then reflected in a building, and the same process takes place in a good novel.”

After graduation, she worked in and around architecture for a decade. And all the while, she wrote and wrote and wrote by night. Bomboy, whose protagonist is a troubled adopted child in Cape Town who discovers a family curse in letters from his real father in Nigeria, was shortlisted for the Etisalat Fiction Prize. Her second novel, about two grumpy old women and racism, The Woman Next Door (2017), was shortlisted for the International Dublin Literary Award. An Unusual Grief is a good bet to go even further.

For the last few years, Omotoso has been living by the sweat of her pen. “So it’s a happy ending.”

She has just made a happy beginning, too. Her 21-month-old twin sons joined her at last month’s Franschhoek Literary Festival, the first edition to be held in person since 2019 – where she was in conversation with the academic and book critic Wamuwi Mbao.

For Omotoso, motherhood has added a jolt of personal resonance to An Unusual Grief, whose premise of a mother mourning a daughter deliberately inverts her own bereavement story: she was 23 when she lost her mother, Marguerita, to cancer. She was an urban designer from Barbados, who met Kole when they were both students in Edinburgh and then moved to Nigeria with him to raise Yewande and her two brothers.

“Most of the book was written way before I was even trying to have kids, to be honest – and long before I was pregnant,” she says.

“Mojisola leads a very scripted life, and the tragedy of her daughter’s death suddenly gives her permission to write her own script,” Omotoso told Mbao. “When I was imagining her responses, I thought a lot about my aunts, my dad’s cousins – not so much because I needed her to be believable but because I needed to temper my own conceits about where she might go.”

Mojisola’s uncanny process of grief –  at first a distraught fugue state, and then a kind of darkly exhilarating surrender to repressed drives – was informed by Omotoso’s own experience of the surreality of surviving a loved one.

“Apart from the birth of my kids, the loss of my mother was the event that has impacted my life the most,” she told Mbao. “You have this strange relationship with the person who died, which continues but in a very warped, almost absurd manner. You are growing in the physical realm, but they are growing in some other realm. You might freeze them. In a sense you are still relating to the person they were when they left. There is also something very delicious about grief, about the way in which it can open us up, just as it can also close us down.”

The twist in this tale – the sharpest point in the family’s geometry of grief – relates to Mojisola’s husband, Titus. He is an annoying and chronically adulterous professor who is utterly gobsmacked by his wife’s departure and keeps on phoning and texting her. “Oh, Titus,” says Omotoso with a weary sigh. “He is well-meaning, but problematic. He takes up too much space.” Titus’s full humanity crystallises in the novel’s climax: though he is at one level a satire of the dysfunctions of a generation of elite Nigerian men, he is also given a rich and tragic particularity.

Omotoso’s novels carry their politics lightly. For example, the Nigerianness of Mojisola does not condition her interactions with South Africans, despite the rising heat of South African xenophobia. The novel looks through the frenetic screen of the social moment into the weird fires of interiority – especially into the (deeply political) psychodramas of Mojisola and Titus’s childhoods in Nigeria. Their backstories define them far more radically and mysteriously than their exterior identities define them in the here and now. Says Omotoso: “I liked what my older brother Akin [Omotoso, the filmmaker and actor] said to me once about storytelling – if you want to send a message, go to the post office.”

Titus is definitely not Kole, and Mojisola is definitely not Marguerita, but An Unusual Grief does empathetically critique her parents’ milieu of postcolonial African intellectuals: liberators who couldn’t break the chains of private pain. Kole’s old friend Nuruddin Farah, the great Somalian novelist, was sitting in the audience at Franschhoek, and commented ruefully that his generation, unlike Yewande’s, were skilled keepers of secrets.

But they were also an inspiration – proving that a life of intellectual action was possible. Her father wrote eight novels, two plays and five books of scholarship. Yewande remembers calling Wole Soyinka “uncle” – he was also a close friend of Kole, and a colleague at the University of Ife at the time he won the Nobel Prize for Literature.

“I remember him coming back from some trip abroad with a bag full of trinkets,” she says. “All the kids would line up and be given these presents, and I got these white pearl-drop earrings … He was the man of magic with his bag of trinkets. We had a sense of being part of a community of thinkers and doers. It shaped me, I would say.”